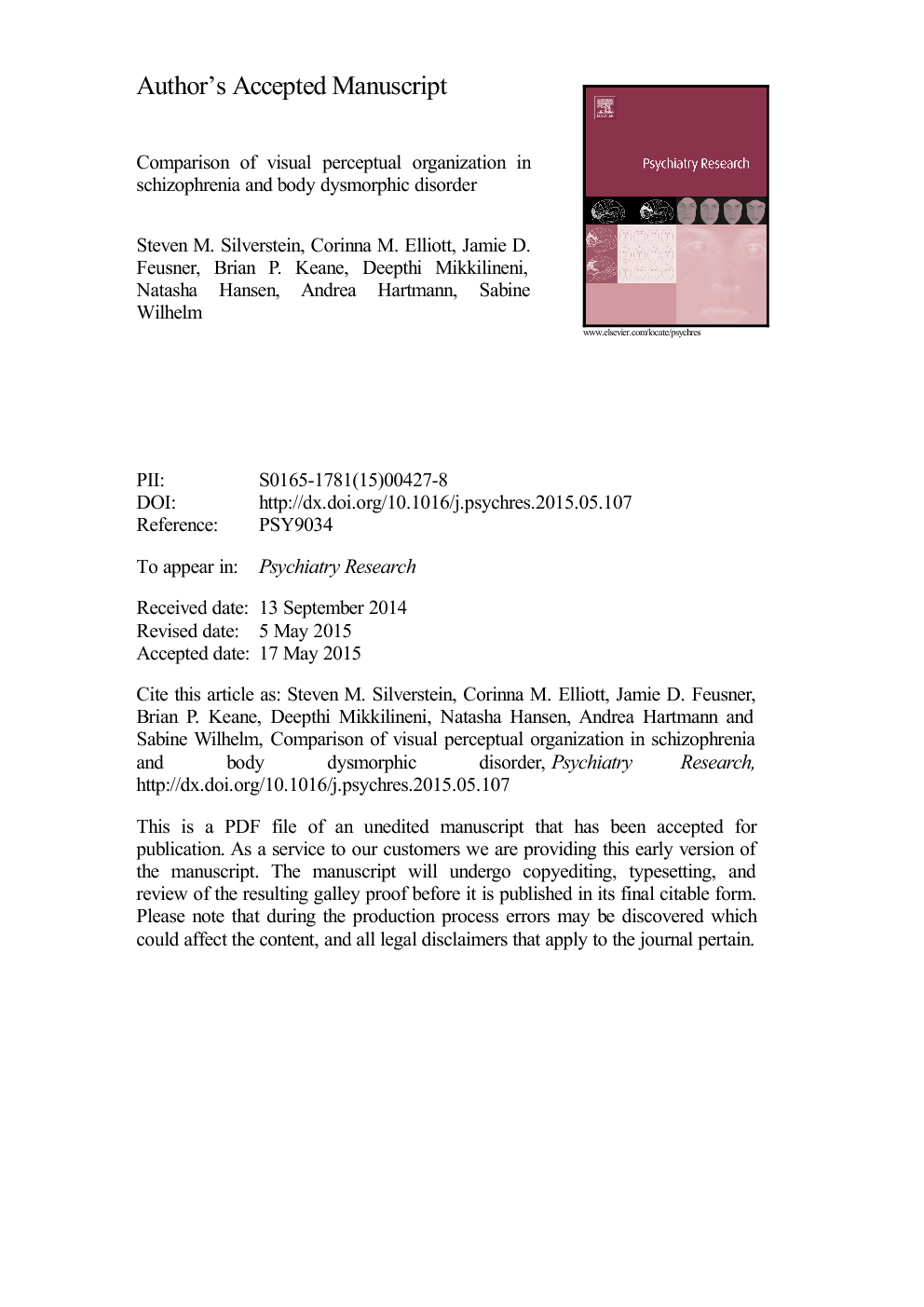 People with schizophrenia are impaired at organizing potentially ambiguous visual information into well-formed shape and object representations. This perceptual organization (PO) impairment has not been found in other psychiatric disorders. However, recent data on body dysmorphic disorder (BDD), suggest that BDD may also be characterized by reduced PO. Similarities between these groups could have implications for understanding the RDoC dimension of visual perception in psychopathology, and for modeling symptom formation across these two conditions. We compared patients with SCZ (n=24) to those with BDD (n=20), as well as control groups of obsessive-compulsive disorder (OCD) patients (n=20) and healthy controls (n=20), on two measures of PO that have been reliably associated with schizophrenia-related performance impairment. On both the contour integration and Ebbinghaus illusion tests, only the SCZ group demonstrated abnormal performance relative to controls; the BDD group performed similarly to the OCD and CON groups. In addition, on both tasks, the SCZ group performed more abnormally than the BDD group. Overall, these data suggest that PO reductions observed in SCZ are not present in BDD. Visual processing impairments in BDD may arise instead from other perceptual disturbances or attentional biases related to emotional factors.

It is increasingly recognized that there is overlap between certain psychiatric syndromes in terms of their genetic, neurobiological, cognitive, behavioral, and phenomenological characteristics (Guilmatre et al., 2009, Bellivier et al., 2013, Doherty and Owen, 2014 and Monzani et al., 2014). The mounting evidence for this conclusion has led the National Institute of Mental Health (NIMH) to introduce the Research Domain Criteria (RDoC) initiative (Cuthbert and Insel, 2010 and Insel et al., 2010). The rationale behind RDoC is that diagnosis and treatment of mental disorders should not be driven primarily by a focus on signs and symptoms (given their problems with reliability and various forms of validity), but rather, by a focus on dimensions of functioning with known pathophysiological mechanisms. A related implication of RDoC is that the yield of psychopathology research may be more fruitful if studies examine these dimensions across current diagnostic categories. One RDoC dimension that has been studied repeatedly within diagnostic categories is cognition, a subcategory of which is perception. A well-documented visual impairment in schizophrenia (SCZ) is in perceptual organization (PO) – the processes by which individual elements of sensory information are collectively structured into larger units of perceived objects and their interrelations (Palmer, 1999). Over 50 studies have demonstrated reduced PO in SCZ (for reviews, see Uhlhaas and Silverstein, 2005; Silverstein and Keane, 2011). Some of these studies suggest that, among psychiatric conditions, PO impairment is specific to SCZ, in that it has not been observed in mixed groups of psychotic patients without SCZ, in non-psychotic patients, or in patients who abuse drugs that are not psychotomimetic (Silverstein and Keane, 2011) [there is debate, however, over whether autism, another neurodevelopmental disorder, is characterized by reduced PO (Dakin and Frith, 2005; Sun et al., 2012)]. Recently, however, perceptual impairments that may be aspects of, or secondary to, reduced PO have been observed in body dysmorphic disorder (BDD), a condition characterized by preoccupation with perceived defects in visual appearance. For example, Feusner and colleagues demonstrated that BDD patients are impaired at processing low spatial frequency information in faces, and demonstrate hypoactivity in occipital regions during processing of low spatial frequency information from own face, other face, and object stimuli (Feusner et al., 2007, Feusner et al., 2010a, Feusner et al., 2010b, Feusner et al., 2010c and Feusner et al., 2011). Patients with BDD and individuals with a high degree of body image concern also show a reduced face inversion effect (i.e., a worsening of performance when making judgments about faces that are upended compared to upright faces) (Feusner et al., 2010b, Jefferies et al., 2012 and Mundy and Sadusky, 2014). Because the face inversion effect has traditionally been thought to reflect the contrast between rapid configural processing of upright faces versus slower serial processing of inverted faces (Tanaka and Farah, 1993, Tanaka and Sengco, 1997, Freire et al., 2000, Taubert et al., 2011 and Peters et al., 2013) [but see (Rakover, 2013, Civile et al., 2014 and Xu and Biederman, 2014) for other accounts of the effect], and because low spatial frequency information carries the majority of information about global form (Tanaka and Farah, 1993, Costen et al., 1996 and Deruelle and Fagot, 2005), these data suggest a reduction in PO in BDD. Of note, patients with SCZ have shown performance impairments on tasks that are similar to the ones used to study face processing in BDD, including reduced face inversion effects (Schwartz et al., 2002, Chen et al., 2008, Soria Bauser et al., 2012 and Tsunoda et al., 2012) [but see (Chambon et al., 2006 and Butler et al., 2008)], reduced processing of low spatial frequency information in faces (Silverstein et al., 2010), and reduced encoding of the structural features of faces (Turetsky et al., 2007 and Tsunoda et al., 2012). To date, however, no studies directly comparing BDD and SCZ on visual perception have been conducted. The purpose of this pilot study was, therefore, to directly compare BDD and SCZ patients on two measures of PO that have repeatedly shown sensitivity to impairments in SCZ: an Ebbinguaus illusion task and a contour integration (CI) task. In addition, a group of obsessive-compulsive disorder (OCD) patients was included to control for obsessive-compulsive features, and to determine whether problems in organizational strategies that have been observed in OCD (e.g., on verbal and visual memory tasks (Deckersbach et al., 2000a, Deckersbach et al., 2000b, Deckersbach et al., 2000c and Savage et al., 2000) could account for task performance in BDD. Psychiatrically healthy controls were also included.