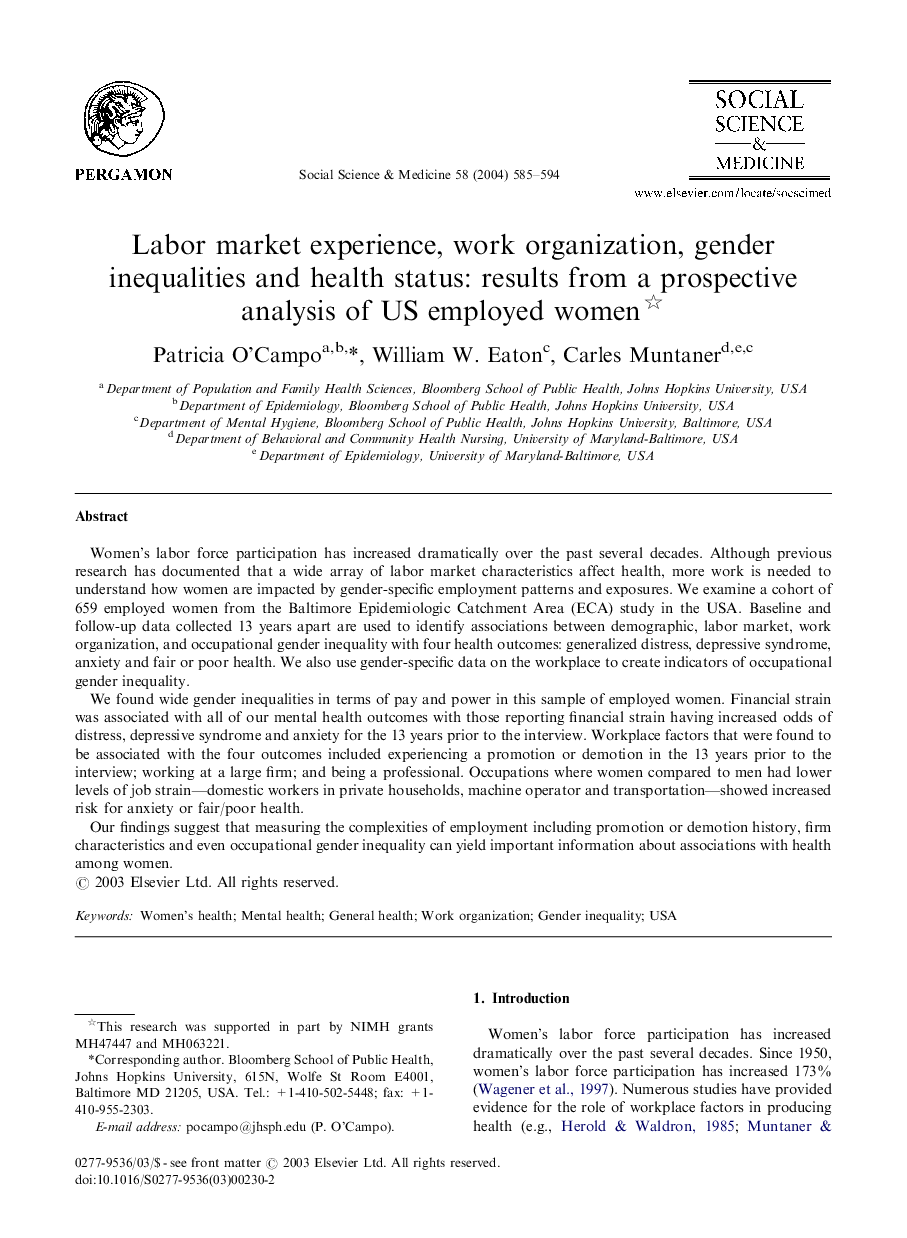 Women's labor force participation has increased dramatically over the past several decades. Although previous research has documented that a wide array of labor market characteristics affect health, more work is needed to understand how women are impacted by gender-specific employment patterns and exposures. We examine a cohort of 659 employed women from the Baltimore Epidemiologic Catchment Area (ECA) study in the USA. Baseline and follow-up data collected 13 years apart are used to identify associations between demographic, labor market, work organization, and occupational gender inequality with four health outcomes: generalized distress, depressive syndrome, anxiety and fair or poor health. We also use gender-specific data on the workplace to create indicators of occupational gender inequality. We found wide gender inequalities in terms of pay and power in this sample of employed women. Financial strain was associated with all of our mental health outcomes with those reporting financial strain having increased odds of distress, depressive syndrome and anxiety for the 13 years prior to the interview. Workplace factors that were found to be associated with the four outcomes included experiencing a promotion or demotion in the 13 years prior to the interview; working at a large firm; and being a professional. Occupations where women compared to men had lower levels of job strain—domestic workers in private households, machine operator and transportation—showed increased risk for anxiety or fair/poor health. Our findings suggest that measuring the complexities of employment including promotion or demotion history, firm characteristics and even occupational gender inequality can yield important information about associations with health among women.

Women's labor force participation has increased dramatically over the past several decades. Since 1950, women's labor force participation has increased 173% (Wagener et al., 1997). Numerous studies have provided evidence for the role of workplace factors in producing health (e.g., Herold & Waldron, 1985; Muntaner & O’Campo, 1993; Johnson & Hall, 1995; Macran et al., 1996; Roxburgh, 1996) and a growing number have examined the effects of work on women's health (e.g., McLanahan & Adams 1987; Waldron and Jacobs (1988) and Waldron and Jacobs (1989), 1989; Arber 1991; Weatherall et al., 1994; England, 1996; Wagener et al., 1997; Khlat et al., 2000). Research on employment factors and women's health has focused on several topics including issues concerning workplace exposures and pregnancy (Ceron-Mireles et al., 1996; Landsbergis & Hatch, 1996; Savitz et al., 1997) and women's ability to juggle the multiple roles of spouse, worker, homemaker, and parent (Nathanson, 1980; Waldron & Jacobs, 1989; Weatherall et al., 1994; Bianchi & Spain, 1996; Frone, 1997; Repetti, 1998; Khlat et al., 2000). Yet few studies have examined whether and how gender inequalities are associated with poor health status. It has been well documented that women and men have different experiences at work (Reskin & Padavic, 1994; Valian, 1998). Gender inequality manifests itself in many aspects of work including types of jobs occupied by men and women, pay, promotion, and access to jobs with power to name a few. Gender segregation in the workplace traditionally describes the process whereby men and women work in different types of jobs, and further that jobs where women predominate tend to be devalued. It has also been shown that within occupations, women may have different experiences when it comes to pay, promotion, and decision-making. Women and men have been found to have different tasks despite having the same job title (Messing, Dumais et al., 1994). Women are paid less than men for the same jobs even after accounting for education, training and job experience (National Academy of Sciences, 1989; Valian, 1998). Women are less likely than men to hold managerial or positions of power (Wright, 1997). Recent data show that only 10% of top 500 companies have women holding top executive positions; 90% have no women corporate officers (Catalyst, 1998). Because of the lack of research on this topic, there are few guides as to how we might conceptualize and measure gender inequality in the workplace and how these inequalities may impact health. Thus, the creation of indicators of gender inequality in the workplace is one area that we sought to explore in this paper. We were interested in how gender inequalities may manifest themselves within the same occupational titles. We further sought to examine in an exploratory fashion associations regarding gender inequalities and health status with these data. Jobs with greater gender inequality in the area of pay, promotion, or power may contribute to poorer health outcomes among women. Women who are working in occupations with greater levels of relative gender deprivation with regard to pay for equal jobs or positions of power may be negatively impacted when it comes to health and especially mental health. Compared to men, women may be segregated into jobs with greater negative health consequences. For example, previous work has shown that jobs classified as “women's jobs” are more likely to be passive jobs, or jobs with low demands and low levels of control which have been linked to adverse health outcomes (Karasek & Theorell, 1990). Thus, women exposed to jobs with greater gender inequalities with regard to job demands or passivity may be associated with poorer health status. Our sample is unique in several ways. First, the Baltimore Epidemiologic Catchment Area study collected a wealth of information on labor market characteristics (i.e., compensation, employer size, occupational hierarchy, promotion, demotion) which have seldom been examined simultaneously in the past. We were able to use this wealth of data to create indicators to examine gender inequality by categories of occupation. We also take advantage of the prospective design of the Baltimore ECA Follow-up which studied the mental health status of an urban cohort for 13 years, to examine our research questions on women's employment and health. Few previous studies have used structured psychiatric interviews to yield clinical-style diagnoses of adverse mental outcomes. Baltimore's ECA used structured, non-clinical interviews to obtain psychiatric diagnoses of baseline and follow-up outcomes such as anxiety and depressive syndrome.