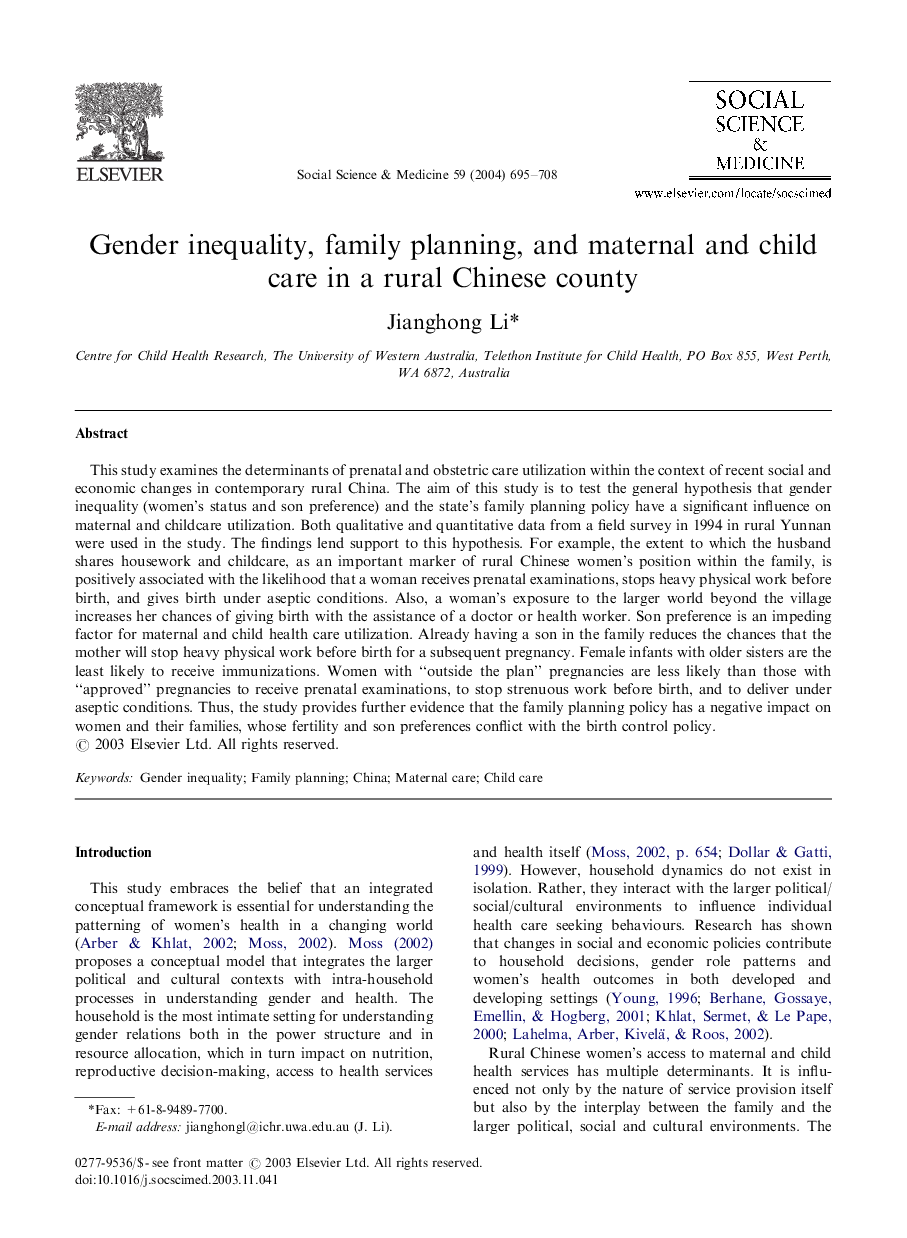 This study examines the determinants of prenatal and obstetric care utilization within the context of recent social and economic changes in contemporary rural China. The aim of this study is to test the general hypothesis that gender inequality (women's status and son preference) and the state's family planning policy have a significant influence on maternal and childcare utilization. Both qualitative and quantitative data from a field survey in 1994 in rural Yunnan were used in the study. The findings lend support to this hypothesis. For example, the extent to which the husband shares housework and childcare, as an important marker of rural Chinese women's position within the family, is positively associated with the likelihood that a woman receives prenatal examinations, stops heavy physical work before birth, and gives birth under aseptic conditions. Also, a woman's exposure to the larger world beyond the village increases her chances of giving birth with the assistance of a doctor or health worker. Son preference is an impeding factor for maternal and child health care utilization. Already having a son in the family reduces the chances that the mother will stop heavy physical work before birth for a subsequent pregnancy. Female infants with older sisters are the least likely to receive immunizations. Women with “outside the plan” pregnancies are less likely than those with “approved” pregnancies to receive prenatal examinations, to stop strenuous work before birth, and to deliver under aseptic conditions. Thus, the study provides further evidence that the family planning policy has a negative impact on women and their families, whose fertility and son preferences conflict with the birth control policy.

This study embraces the belief that an integrated conceptual framework is essential for understanding the patterning of women's health in a changing world (Arber & Khlat, 2002; Moss, 2002). Moss (2002) proposes a conceptual model that integrates the larger political and cultural contexts with intra-household processes in understanding gender and health. The household is the most intimate setting for understanding gender relations both in the power structure and in resource allocation, which in turn impact on nutrition, reproductive decision-making, access to health services and health itself (Moss, 2002, p. 654; Dollar & Gatti, 1999). However, household dynamics do not exist in isolation. Rather, they interact with the larger political/social/cultural environments to influence individual health care seeking behaviours. Research has shown that changes in social and economic policies contribute to household decisions, gender role patterns and women's health outcomes in both developed and developing settings (Young, 1996; Berhane, Gossaye, Emellin, & Hogberg, 2001; Khlat, Sermet, & Le Pape, 2000; Lahelma, Arber, Kivelä, & Roos, 2002). Rural Chinese women's access to maternal and child health services has multiple determinants. It is influenced not only by the nature of service provision itself but also by the interplay between the family and the larger political, social and cultural environments. The cultural context for this study is the patrilineal family system of rural China, which perpetuates son preference and gender inequity and inequality. Three concomitant social changes that have been taking place in China since the late 1970s make up the geopolitical environment in which this study is situated. These changes include the birth planning policy, economic reform and the subsequent decline in social and health services, and the revival of a traditional gender role ideology. Few studies have taken a holistic approach to elucidating this multi-faceted process of reproductive health behaviour in rural China. This study aims to fill this gap by examining individual, familial and village characteristics, and their relationship to maternal and child health care utilization in a rural county in Yunnan, China, in the context of the patrilineal family institution (virilocal marriage) and thence son preference. The study tests the hypothesis that gender inequality and the larger political environment influence maternal and child health care seeking behaviours. It specifically examines the impact of women's position within and outside the family, son preference and the family planning policy on health care utilization: (1) antenatal care, (2) birth delivery assistance from a health professional and/or delivery under septic conditions and (3) infant immunization. These three types of health services affect both the mother and the infant, and are preventative because potential problems can be monitored and prevented. Delivery assistance is also curative in terms of treating problems that can occur during pregnancy and birth. Previous research has shown that obstetric care reduces the risks associated with pregnancy complications (Nagey, 1991; Williams, Baumslag, & Jelliffe, 1994; Wasserheit, 1989). Infant mortality was found to be significantly associated with pregnancy care, birth delivery methods (traditional midwives vs. professional health workers), and immunizations in rural China and other developing countries (Huang, Yu, Wang, & Li, 1997; Zhang, Jin, & Song, 1997; Koblinsky, Campell, & Heichelheim, 1999; Nelson & Taylor, 1999; Foggin, Armijo-Hussein, Marigaux, Zhu, & Liu, 2001; Suwal, 2001). This study takes into account the effect of the distance of service location, and the socioeconomic and cultural conditions of the family and the local village, in order to assess the influence of women's position, son preference and family planning policy on the utilization of maternal and infant health care. The study is based on data from a field survey conducted in Diandong (a pseudonym) county, Yunnan, China, in 1994. The data source is rich in information about son preference and women's status within and outside the household. It contains detailed information on pregnancy and obstetric care history. Further, the data allow for an adjustment for possible cultural and economic variations across villages in gender relations and health practice in the locality. Finally, ethnographic data collected from field observations and interviews with local officials, health workers and local villagers, enrich the analysis.

Situated within an integrated conceptual framework that links the larger political, socioeconomic, and cultural contexts to the intra-household dynamics, this study aimed to test the general hypothesis that gender inequality and social policy affect maternal and child health care utilization. The study specifically examined the impact of women's status, son preference, and family planning policy on maternal and infant health service utilization in a rural Chinese setting. Two of the four dimensions of women's status were significantly associated with the outcome variables of interest. The extent to which husbands shared housework and childcare, as a salient dimension of women's status, was positively associated with prenatal and obstetric care utilization. An egalitarian division of housework and childcare between the partners made it much more likely that a woman received prenatal examinations, stopped heavy work before birth, and had their babies delivered under aseptic conditions. This association may be interpreted in two ways. First, husbands who shared housework and childcare were more likely to be concerned about their wife's general well-being and thus encourage them to seek care when in need than those who did not or shared little of women's domestic burden. Second, by assisting with housework and childcare, husbands allowed their spouses time to seek necessary health care. The importance of this dimension of women's status reconfirmed our field observation that the extent to which the husband shared housework and childcare was a critical indicator of women's status within the family in Diandong. It was also consistent with previous findings from qualitative studies in other parts of rural Yunnan (Wong et al., 1995). This finding is of particular significance given a likely increase in women's “double burden” (farm and domestic work) in rural China as a result of male labour migration and a greater demand for women to contribute to the household economy and to provide care for the family under the economic reform. The findings have also shown that a woman's exposure to the larger world beyond the village increased the chances that she gave birth attended by a doctor or health worker.