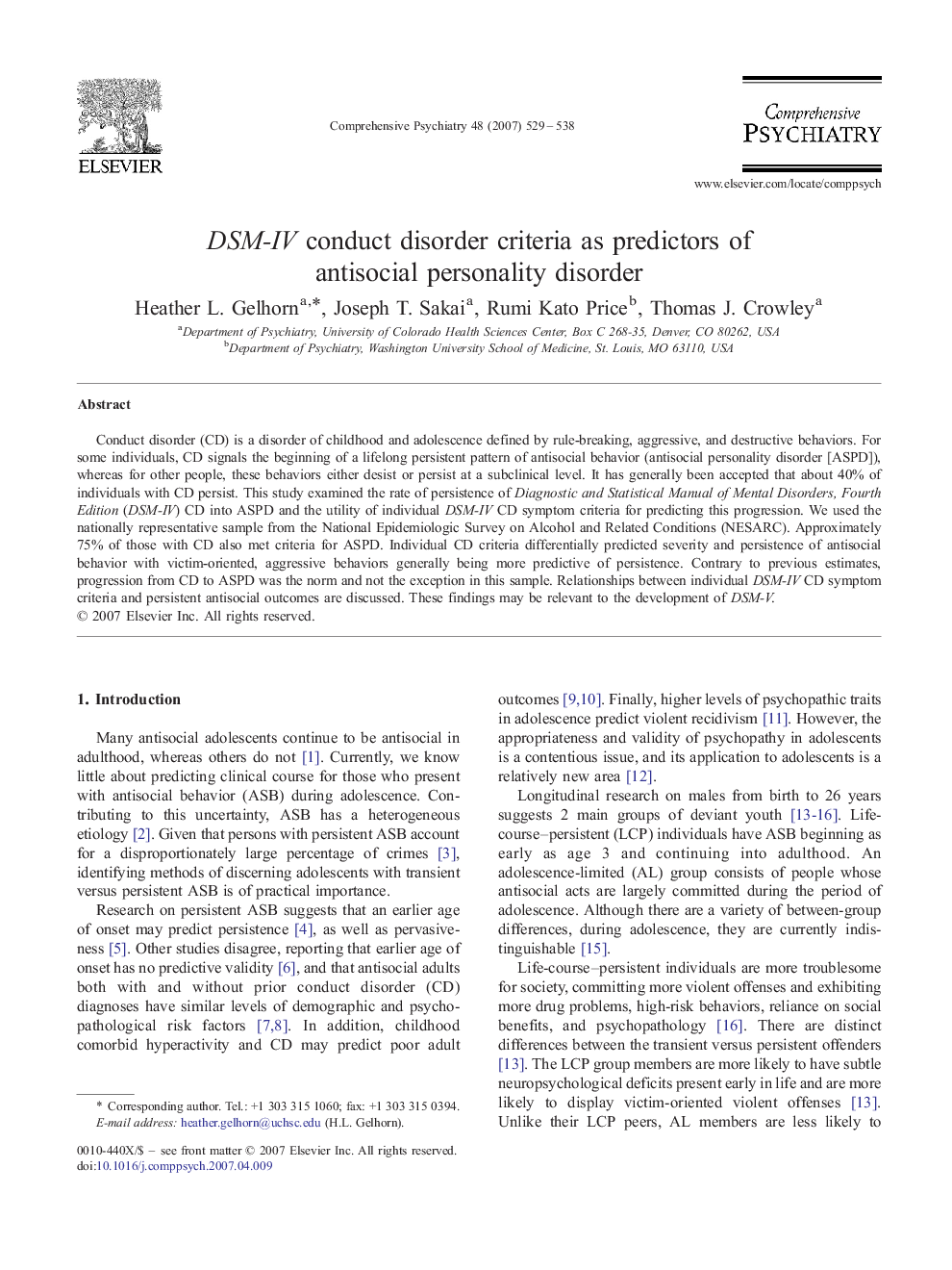 Abstract Conduct disorder (CD) is a disorder of childhood and adolescence defined by rule-breaking, aggressive, and destructive behaviors. For some individuals, CD signals the beginning of a lifelong persistent pattern of antisocial behavior (antisocial personality disorder [ASPD]), whereas for other people, these behaviors either desist or persist at a subclinical level. It has generally been accepted that about 40% of individuals with CD persist. This study examined the rate of persistence of Diagnostic and Statistical Manual of Mental Disorders, Fourth Edition (DSM-IV) CD into ASPD and the utility of individual DSM-IV CD symptom criteria for predicting this progression. We used the nationally representative sample from the National Epidemiologic Survey on Alcohol and Related Conditions (NESARC). Approximately 75% of those with CD also met criteria for ASPD. Individual CD criteria differentially predicted severity and persistence of antisocial behavior with victim-oriented, aggressive behaviors generally being more predictive of persistence. Contrary to previous estimates, progression from CD to ASPD was the norm and not the exception in this sample. Relationships between individual DSM-IV CD symptom criteria and persistent antisocial outcomes are discussed. These findings may be relevant to the development of DSM-V.

Introduction Many antisocial adolescents continue to be antisocial in adulthood, whereas others do not [1]. Currently, we know little about predicting clinical course for those who present with antisocial behavior (ASB) during adolescence. Contributing to this uncertainty, ASB has a heterogeneous etiology [2]. Given that persons with persistent ASB account for a disproportionately large percentage of crimes [3], identifying methods of discerning adolescents with transient versus persistent ASB is of practical importance. Research on persistent ASB suggests that an earlier age of onset may predict persistence [4], as well as pervasiveness [5]. Other studies disagree, reporting that earlier age of onset has no predictive validity [6], and that antisocial adults both with and without prior conduct disorder (CD) diagnoses have similar levels of demographic and psychopathological risk factors [7] and [8]. In addition, childhood comorbid hyperactivity and CD may predict poor adult outcomes [9] and [10]. Finally, higher levels of psychopathic traits in adolescence predict violent recidivism [11]. However, the appropriateness and validity of psychopathy in adolescents is a contentious issue, and its application to adolescents is a relatively new area [12]. Longitudinal research on males from birth to 26 years suggests 2 main groups of deviant youth [13], [14], [15] and [16]. Life-course–persistent (LCP) individuals have ASB beginning as early as age 3 and continuing into adulthood. An adolescence-limited (AL) group consists of people whose antisocial acts are largely committed during the period of adolescence. Although there are a variety of between-group differences, during adolescence, they are currently indistinguishable [15]. Life-course–persistent individuals are more troublesome for society, committing more violent offenses and exhibiting more drug problems, high-risk behaviors, reliance on social benefits, and psychopathology [16]. There are distinct differences between the transient versus persistent offenders [13]. The LCP group members are more likely to have subtle neuropsychological deficits present early in life and are more likely to display victim-oriented violent offenses [13]. Unlike their LCP peers, AL members are less likely to display pervasive ASB and are less prone to violent acts [13] and [16]. The theory suggests that AL adolescents commit antisocial acts with peers and engage primarily in behaviors that symbolize adult privilege and autonomy from parents [15]. If this theory is correct, then ASBs in adolescence should differentially predict persistence to adult ASB. 1.1. Aims of the study In the present study, we examine the prevalence of Diagnostic and Statistical Manual of Mental Disorders, Fourth Edition (DSM-IV), CD criteria and their utility as discriminators between those who endorse symptom criteria but do not qualify for a diagnosis (subclinical [SC]) and those who have a CD diagnosis (clinical). We also examine the use of the individual criteria for predicting those who qualify for a diagnosis of CD, who will continue on to a diagnosis of antisocial personality disorder (ASPD; ie, transient versus persistent ASB). The main objective is to identify ASBs displayed during adolescence, which may indicate severity and persistence into adulthood. Several previous studies of CD have looked at individual diagnostic criteria; however, none of them have done so with goals similar to those of the present study [2], [17], [18], [19] and [20]. To our knowledge, this is the first study to examine the use of individual DSM-IV CD symptom criteria in predicting persistence and diagnosis of ASPD in adulthood.

Conclusions and future directions Although our results should be confirmed with prospective longitudinal designs, our findings are important for several reasons. First, our results suggest that most individuals with CD go on to develop persistent ASPD emphasizing the severity of this adolescent diagnosis. Second, our analyses suggest that CD criteria involving victim-oriented offenses are more predictive of persistence. These findings may prove useful for clinicians treating adolescents and researchers engaged in longitudinal ASB research. Finally, psychiatrists are currently considering a revision of DSM-IV [29] and predicting clinical course and selecting appropriate treatments are major foci of the DSM. Our study suggests that there may be additional information within the current criteria that is useful in delineating clinical course and outcome. There have been few studies investigating individual DSM criteria with nationally representative samples. Our findings provide information on persistence and information specific to each criterion that may have relevance to the CD section of DSM-V.