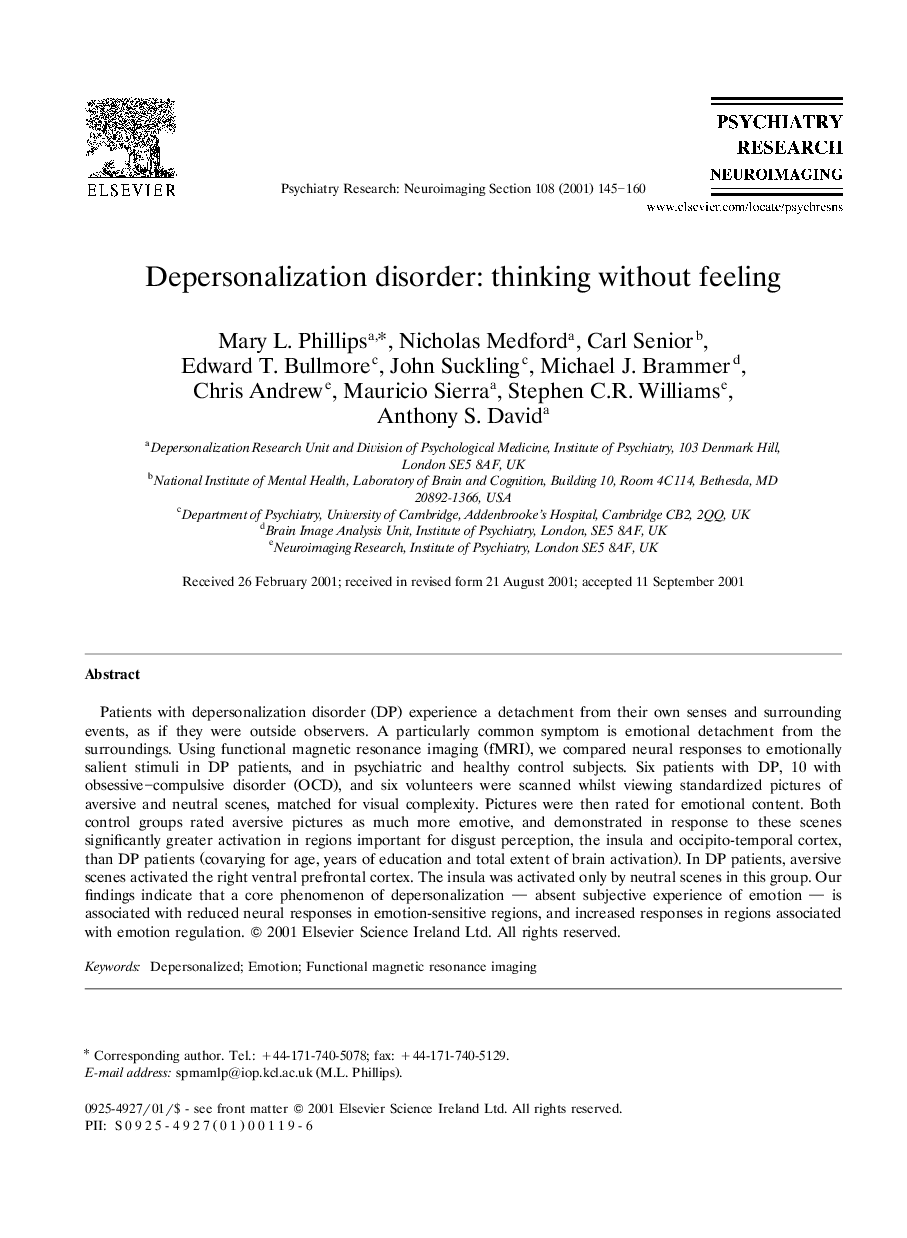 Patients with depersonalization disorder (DP) experience a detachment from their own senses and surrounding events, as if they were outside observers. A particularly common symptom is emotional detachment from the surroundings. Using functional magnetic resonance imaging (fMRI), we compared neural responses to emotionally salient stimuli in DP patients, and in psychiatric and healthy control subjects. Six patients with DP, 10 with obsessive–compulsive disorder (OCD), and six volunteers were scanned whilst viewing standardized pictures of aversive and neutral scenes, matched for visual complexity. Pictures were then rated for emotional content. Both control groups rated aversive pictures as much more emotive, and demonstrated in response to these scenes significantly greater activation in regions important for disgust perception, the insula and occipito-temporal cortex, than DP patients (covarying for age, years of education and total extent of brain activation). In DP patients, aversive scenes activated the right ventral prefrontal cortex. The insula was activated only by neutral scenes in this group. Our findings indicate that a core phenomenon of depersonalization — absent subjective experience of emotion — is associated with reduced neural responses in emotion-sensitive regions, and increased responses in regions associated with emotion regulation.

Depersonalization is an alteration in the perception or experience of the self. Sufferers feel uncomfortably detached from their own senses and surrounding events, as if they were outside observers (American Psychiatric Association, 1994). Such symptoms have been found in 2.4% of the general population (Ross, 1991) and 80% of psychiatric inpatients, and were severe and persistent in 12% (Brauer et al., 1970). Depersonalization can occur as a primary disorder, or accompanying depression, anxiety states, and schizophrenia (Simeon et al., 1997). It also occurs in neurological conditions such as the aura to temporal lobe epilepsy (Kenna and Sedman, 1965), and in healthy individuals during fatigue, meditation, extreme stress or after use of psychotomimetic drugs (Simeon and Hollander, 1993 and Mathew et al., 1999). Classical descriptions emphasize reduced, ‘numbed’, or even absent, emotional reactions: e.g. ‘all my emotions are blunted’ (Shorvon, 1946), and ‘the emotional part of my brain is dead’ (Mayer-Gross, 1935). There are further reports that the skin conductance response, a measure of autonomic function and arousal, is abnormally flattened in depersonalized patients in response to emotional stimuli (Lader, 1975 and Sierra et al., 2001). Historically, a neuropsychological basis for depersonalization has been considered (Sierra and Berrios, 1998), stimulated by clinical studies on patients with neurological disorders, and psychophysiological research (Lader, 1975). More recently, functional neuroimaging has highlighted the role of the amygdala in the perception of fear (Morris et al., 1996), and the insula in the perception of disgust (Phillips et al., 1997) and negative emotions (Reiman et al., 1997 and Mayberg et al., 1999), the latter study emphasizing the reciprocal roles of the lateral and orbito-medial prefrontal cortex and insula, amongst other regions, in changes in depressed mood. For example, increases in regional cerebral blood flow (rCBF) in the insula and subgenual cingulate gyrus were associated with decreases in rCBF in the right prefrontal cortex [Brodmann area (BA) 47] during induction of sadness in healthy volunteers. Inhibition of limbic centers by the prefrontal cortex (and vice versa) has been inferred from the pattern of rCBF correlations in several human functional neuroimaging studies (Davidson and Sutton, 1995 and Drevets and Raichle, 1998). Such studies have paved the way for a neurobiological understanding of a range of mood and anxiety disorders, and have been incorporated into a model (Sierra and Berrios, 1998) for the reduced emotionality in depersonalization. To date, there have been two functional neuroimaging studies in depersonalization. One was a resting state single photon emission computed tomography (SPECT) case study showing left fronto-temporal activation (Hollander et al., 1992). The authors interpreted this as evidence for a common neurobiological basis for depersonalization and OCD, in which increased frontal activation has been associated with the urge to ritualize (Breiter et al., 1996). The second study employed positron emission tomography (PET) to measure metabolism during performance of a verbal learning task, and demonstrated reduced activity in superior and middle temporal gyri in depersonalized patients compared with healthy volunteers (Simeon et al., 2000). The authors suggested that these findings indicated underlying functional abnormalities in brain regions important for an intact body schema in depersonalization disorder. No study has employed functional magnetic resonance imaging (fMRI), or examined neural responses to emotionally salient stimuli in patients with depersonalization disorder. In the current study we employed fMRI to demonstrate the neural response to standardized emotionally salient stimuli (aversive scenes), used previously in neuroimaging studies (Lane et al., 1997 and Lang et al., 1998) in six depersonalized patients, in contrast to that in healthy volunteers and patients with OCD. We recruited the latter as a separate group of psychiatric patients in whom, as for patients with depersonalization, the experience of anxiety and depression occurs frequently but, unlike in patients with depersonalization, the detachment from their own emotional experiences and emotional blunting is uncommon. We sought to distinguish between the neurobiological basis of depersonalization and OCD, predicting that, compared with both healthy volunteers and patients with OCD, depersonalized patients would: (a) rate aversive scenes depicting particularly disgusting material as less emotional; (b) fail to demonstrate the expected increased activation in general visual (occipito-temporal cortex) ( Lane et al., 1997 and Lang et al., 1998) and emotion-specific regions important for the perception of disgust, particularly the insula ( Lane et al., 1997, Phillips et al., 1997, Reiman et al., 1997 and Mayberg et al., 1999), in response to such scenes; (c) demonstrate increased activation in regions implicated in the inhibition of the emotional response (lateral prefrontal cortex) ( Davidson and Sutton, 1995, Drevets and Raichle, 1998 and Mayberg et al., 1999).