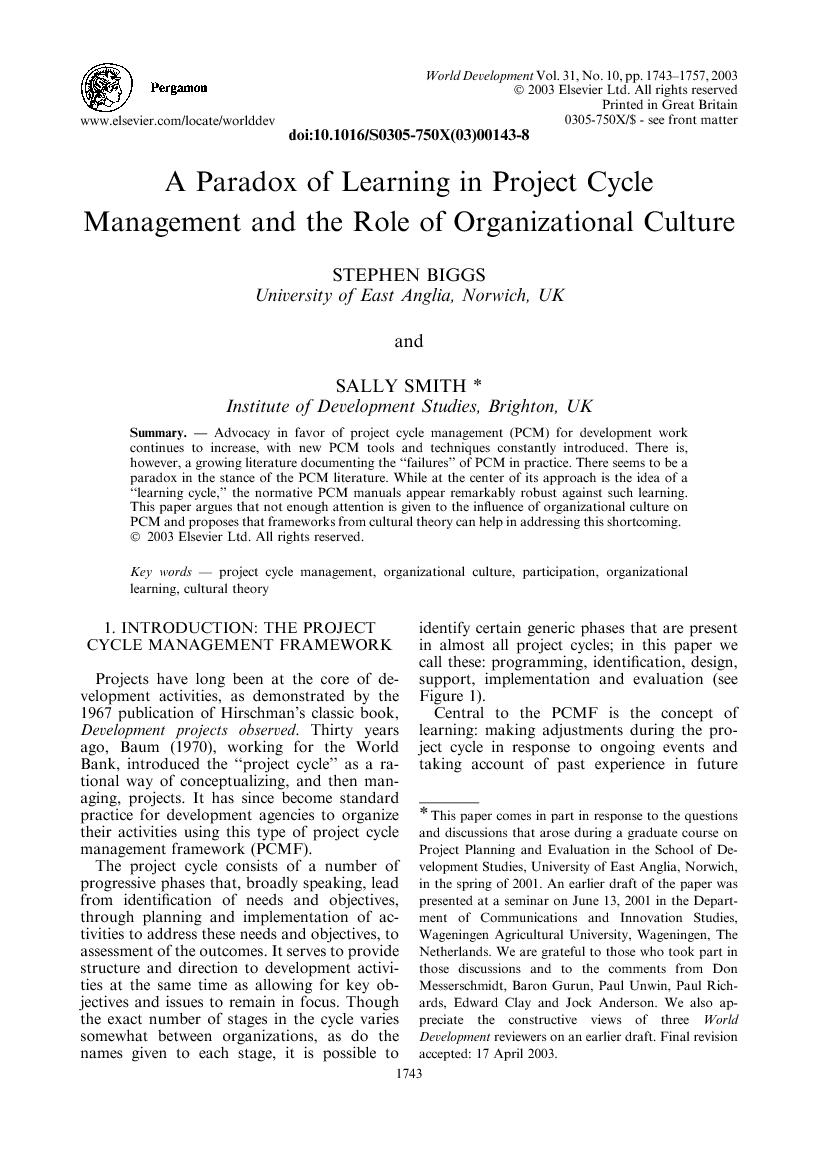 Advocacy in favor of project cycle management (PCM) for development work continues to increase, with new PCM tools and techniques constantly introduced. There is, however, a growing literature documenting the “failures” of PCM in practice. There seems to be a paradox in the stance of the PCM literature. While at the center of its approach is the idea of a “learning cycle,” the normative PCM manuals appear remarkably robust against such learning. This paper argues that not enough attention is given to the influence of organizational culture on PCM and proposes that frameworks from cultural theory can help in addressing this shortcoming.

Projects have long been at the core of development activities, as demonstrated by the 1967 publication of Hirschman’s classic book, Development projects observed. Thirty years ago, Baum (1970), working for the World Bank, introduced the “project cycle” as a rational way of conceptualizing, and then managing, projects. It has since become standard practice for development agencies to organize their activities using this type of project cycle management framework (PCMF). The project cycle consists of a number of progressive phases that, broadly speaking, lead from identification of needs and objectives, through planning and implementation of activities to address these needs and objectives, to assessment of the outcomes. It serves to provide structure and direction to development activities at the same time as allowing for key objectives and issues to remain in focus. Though the exact number of stages in the cycle varies somewhat between organizations, as do the names given to each stage, it is possible to identify certain generic phases that are present in almost all project cycles; in this paper we call these: programming, identification, design, support, implementation and evaluation (see Figure 1).Central to the PCMF is the concept of learning: making adjustments during the project cycle in response to ongoing events and taking account of past experience in future planning. The fact that a cycle is used to represent the project, rather than a linear form, clearly embodies this principal. The generic description of the project cycle presented in Figure 1 belies the fact that it has been greatly refined and developed over the years. The older “blueprint” project cycle has been broadened to take on “process” ideas. Participatory processes have been introduced with recommendations for stakeholders, especially potential beneficiaries, to be included at every stage from identification to evaluation. A whole new range of assessment criteria has been added to the original economic criteria, so that concerns such as the environment, poverty, gender, empowerment, human rights, capacity building, institutional development and sustainability can be included in the assessments that take place at various points in the cycle. In addition, a number of tools have been developed for use within the PCMF. One of the most widely used is the Logical Framework (logframe), developed by the United States Agency for International Development (USAID) in the late 1960s (Coleman, 1987; Gasper, 2000). A logframe summarizes the objectives of a project and the activities designed to achieve them, as well as the critical assumptions that underlie the progression to project goals. It also specifies the indicators to be used to monitor project inputs, outputs, impacts and outcomes. A four-by-four matrix is drawn up which incorporates all this information into a concise and easily understood document.1 Though initially used in the identification and design stages of the project cycle, logframes are now incorporated into every phase of the project cycle. For example, “output to purpose reviews” are common in many agencies, using the outputs and purposes described in the logframe as a basis to review project progress (Coles, Evans, & Heath, 1998). Moreover, “modern” best practice demands that logframes be drawn up in a participatory way, as well as being periodically updated to allow for changing conditions and to encourage learning and innovation (Howes, 1992; Platt, 1997). Given these refinements then, the idea of the project cycle has endured as the central project management tool for some 30 years.2 The World Bank has been a dominant institution in promoting it and has published useful books in support of project cycle activities (e.g., Casley & Kumar, 1987; Casley & Lury, 1982). Some might argue that the recent shift toward sector/program support by various agencies indicates a decline in support for the project and the project cycle,3 but, as those who are familiar with PCMF and logframe thinking will recognize, this can be illusionary and/or an aggregation issue. It is possible to have management hierarchies of “cascading” logframes, with smaller projects nested in bigger projects (programs), and these bigger projects in turn nested within larger strategies and policies (see, for example, Farrington, Thirtle, & Henderson, 1997; Wiggins & Shields, 1995). Furthermore, as well argued recently by Farrington, Blench, Christoplos, Ralsgård, and Rudqvist (2002), Poverty Reduction Strategies Papers (PRSPs) still need “projects” of various kinds to actually implement the strategies and deliver poverty-focused benefits.

To come back to a theme raised early in this paper, much of what we have been highlighting in this paper is not new. For example, back in 1967 Hirschman referred to the importance of the intention and ability of project managers to address things that went far beyond the purely technical issues of project management. What we are suggesting is that cultural analysis could help to address these issues more formally. The aim of this paper is not to present a guidance note on what “should” be done. Rather, it is to raise awareness of the importance of organizational culture (and personal agency) in project cycle management, and to suggest that there are approaches and tools which can be used to systematically incorporate analysis of these issues into the project cycle management framework. They should be seen as complimentary to other more conventional PCM tools, addressing a different but equally important set of issues. Another theme that runs through this paper is that we are not against “good practice” manuals per se. For example, the recent World Bank best practice note we quoted from earlier––which starts by saying that M&E systems are weak in World Bank projects and in the AKIS programs they support (Alex & Byerlee, 2001)––contains much useful advice from some very experienced professionals. The fact remains, however, that these two reflective people observe such behavior in 2001, in spite of advocacy and manuals on PCM emanating from the Bank over many years. It is here that we suggest that cultural analysis of organizations and projects can contribute valuable insights into why useful and sensible manuals are, or are not, used in different cultural contexts. Finally we recognize that deeper issues, such as the broader political setting and the nature of the institutional power structure in which projects exist, always affect the nature and content of projects. Notwithstanding this, however, we suggest that a systemic consideration of organizational culture issues within project planning and management is likely to improve the effectiveness of development interventions. If these issues are addressed more effectively, then there is also a greater chance that future normative literature and best practice guides will better reflect learning from the past and the paradox of the two parallel literatures will gradually fade away.