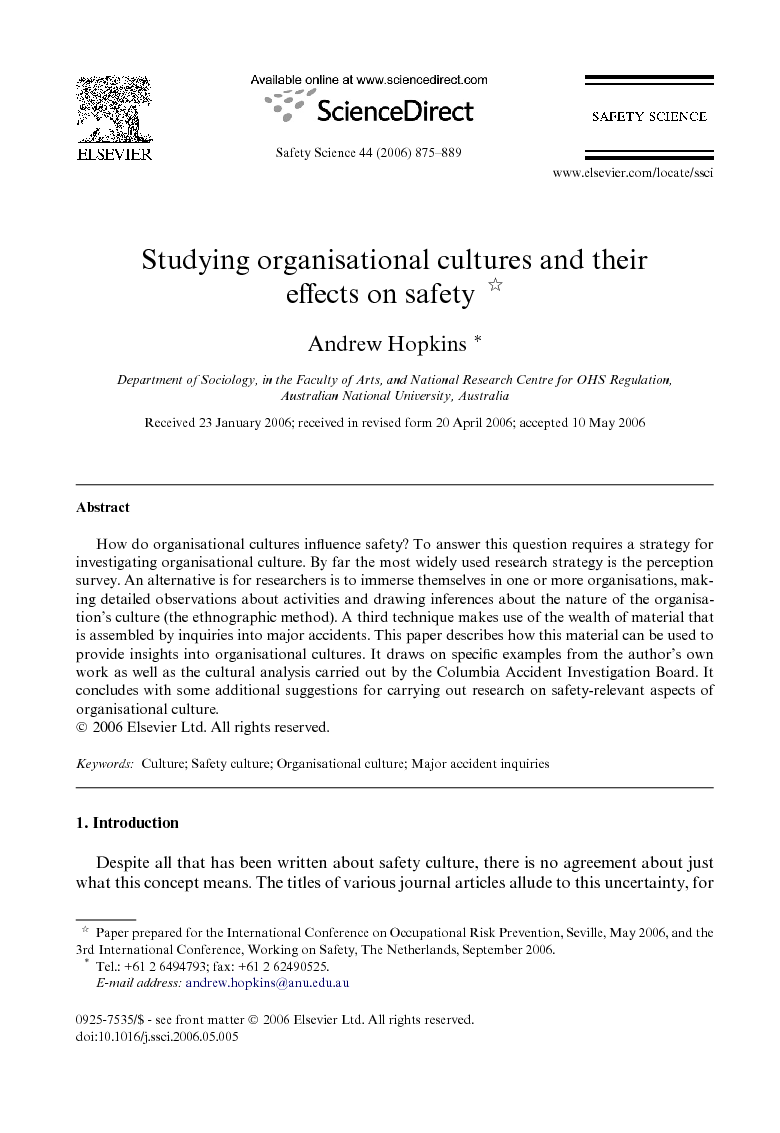 How do organisational cultures influence safety? To answer this question requires a strategy for investigating organisational culture. By far the most widely used research strategy is the perception survey. An alternative is for researchers is to immerse themselves in one or more organisations, making detailed observations about activities and drawing inferences about the nature of the organisation’s culture (the ethnographic method). A third technique makes use of the wealth of material that is assembled by inquiries into major accidents. This paper describes how this material can be used to provide insights into organisational cultures. It draws on specific examples from the author’s own work as well as the cultural analysis carried out by the Columbia Accident Investigation Board. It concludes with some additional suggestions for carrying out research on safety-relevant aspects of organisational culture.

Despite all that has been written about safety culture, there is no agreement about just what this concept means. The titles of various journal articles allude to this uncertainty, for example, “culture’s confusions” (Hale, 2000) and “safety culture: philosopher’s stone or man of straw?” (Cox and Flin, 1998). It is not the purpose of this article to outline these problems, but one crucial ambiguity should be noted. For some writers, every organisation has a safety culture of some sort, which can be described as strong or weak, positive or negative. For other writers, only an organisation which has an over-riding commitment to safety can be said to have a safety culture. On this view, relatively few organisations have safety cultures. As Reason puts it, “like a state of grace, a safety culture is something that is striven for but rarely attained” (Reason, 1997, p. 220; see also Parker et al., 2006). The fact that this very basic contradiction has not been resolved is but one indicator of the confusion which surrounds the use of this term. This paper bypasses some of the confusion by shifting attention to the concept of organisational culture. This is a more general and in some respects a clearer concept. Every organisation has a culture (or perhaps a series of subcultures) and that culture can be expected to impact on safety. Understanding how this happens can provide insights into ways organisational cultures need to be modified to give a higher priority to safety. Distinguishing safety from culture in this way breaks the safety research task into two components – the study of organisational cultures and the study of the impact of these cultures on safety. This paper is largely concerned with the first of these – the study of organisational culture. This is in a sense a prior question; we must first identify and describe various elements of the culture of an organisation before we can evaluate their impact on safety. Although clearer than safety culture, organisational culture has itself been defined in a variety of ways. Schein provides a useful summary of the way the concept of culture has been used by various writers: observed behavioural regularities, group norms, espoused values, formal philosophy, rules of the game, climate, embedded skills, habits of thinking, shared meanings and root metaphors (Schein, 1992, p. 8–9). It will be noted that some of these usages focus on values and attitudes as the key element of culture, while others stress behaviour. Cooper sees this as the crucial distinction. “The main difference between such definitions (he says) appears to reside in their focus on the way people think, or on the way people behave” (2000:112). Perhaps the best known definition of organisational culture, “the way we do things around here” (Deal and Kenney, 1982, p. 4,59,60), is clearly behaviour focussed. Schein himself has at times referred to organisational culture simply as “the way we do things around here” (Schein, 1992, p. 8–9), although his formal definition is more complex. Moreover Hofstede, after discussing whether it is better to focus on values or practices in defining organisational culture, concludes that “shared perceptions of daily practices should be considered to be the core of an organisation’s culture” (Hofstede, 1997, p. 182–3). It should be stressed that definitions in terms of values, on the one hand, and practices, on the other, are not necessarily in conflict in the way that the alternative definitions of safety culture are. It is simply a question of emphasis. “The way we do things around here” carries with it the connotation that this is the right, or appropriate or accepted way to do things. These judgments stem necessarily from shared assumptions or values. To reiterate, a definition in terms of practices does not deny the importance of values in any complete understanding of culture. A further preliminary matter that must be mentioned is the relationship of culture to climate. Various writers argue that there are conceptual differences. For instance it is said that climate is a manifestation of culture (Mearns et al., 2003), that climate is directly measurable while culture is too abstract to be measured directly (Mearns et al., 2003), and that climate refers to the situation at a particular point in time while culture refers to more enduring phenomena (Hale, 2000, p. 5). Some writers see climate as referring to attitudes and culture to behaviour (Guldenmund, 2000, p. 221). However, even writers who argue for a conceptual distinction recognize that those carrying out empirical research on safety climate or safety culture have been unable or unwilling to make these distinctions and that in practice the terms appear to be used interchangeably. Guldenmund (2000, p. 220) suggests that the difference between climate and culture may be little more than terminological fashion. He notes that in 1970s people doing research on these topics tended to use the term climate but that gradually, during the 1980s, climate was replaced by culture. It is also observed that the terms have arisen in different academic disciplines: climate in social psychology and culture in anthropology. As a result they tend to be associated with the different research strategies of these disciplines, respectively, questionnaire research and ethnography. This, however, does not amount to a conceptual distinction between the two ideas, for there is no reason why a single concept cannot be studied using a variety of research strategies. For present purposes, therefore, I shall treat organisational climate and organisational culture as synonymous. While the distinction between culture and climate remains elusive, what is clear is that there are real choices to be made in terms of research strategy. While a single concept can in principle be investigated using more than one research method, those methods have different strengths and weaknesses and can be expected to yield different insights. I turn, therefore, to this question of research strategies.

This paper has been about strategies for studying organisational cultures and their effects on safety. It has argued that the debates in the safety literature about the meaning of terms such as culture, climate and safety culture are somewhat sterile, and that the more important issue is to explore the kinds of methods that are available for studying such phenomena. The most commonly mentioned methods are the survey questionnaire and the ethnography. This paper has sought to draw attention to another method which involves researchers immersing themselves in the mass of material generated by public inquiries into major accidents. Such material provides the researcher with such deep insights into the way an organisation thinks and acts that it can reasonably be described as a form of armchair ethnography. Moreover, using the method of counter-factual thinking, that is, imagining what would have happened had things been otherwise, the researcher can demonstrate quite convincingly the way various elements of the culture of the organisation contributed to the accident. In other words, taken as a whole the method allows the researcher to clarify the impact of various elements of organisational culture on safety. The paper concludes with some comments about more time-efficient strategies available for studying safety-relevant aspects of organisational culture.