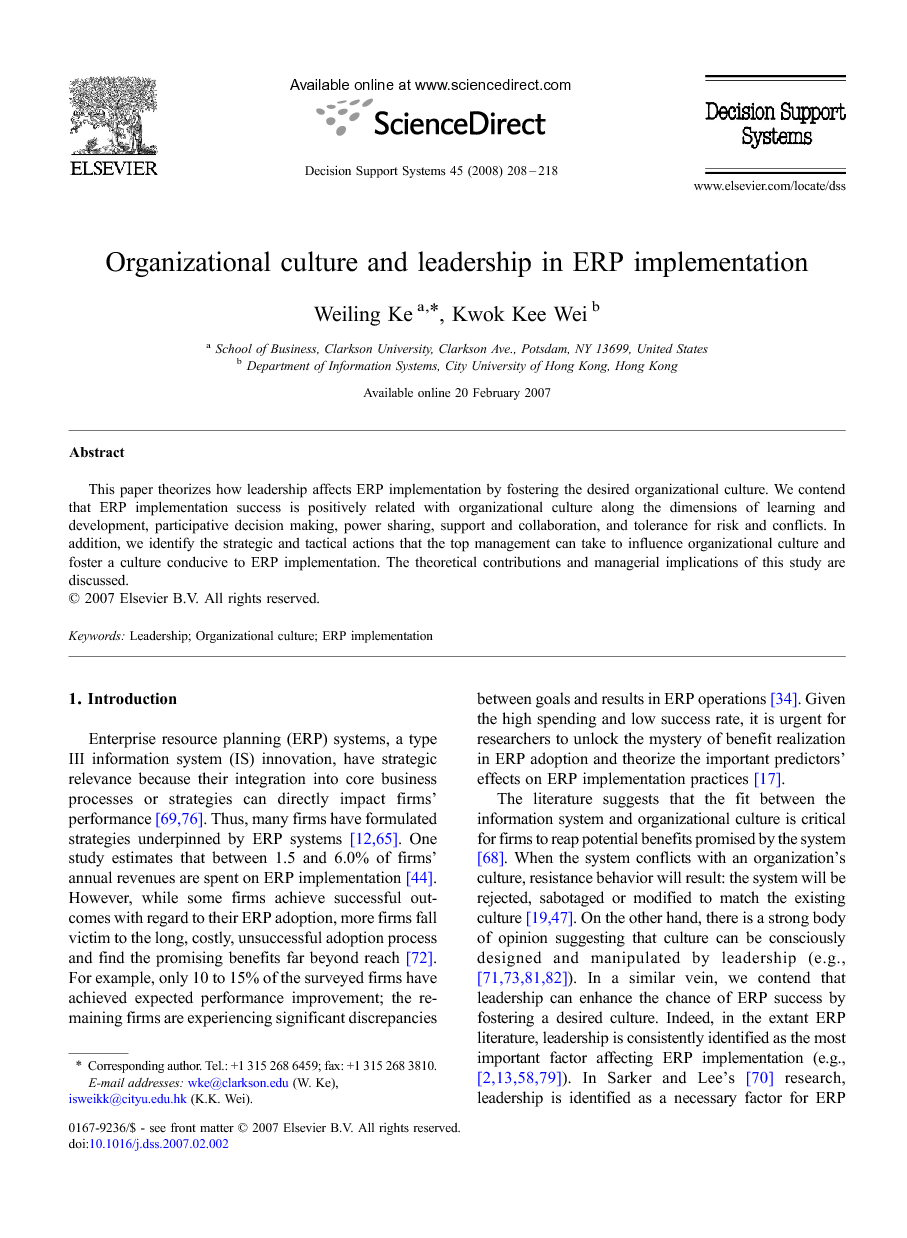 A growing research stream in organizational sciences views organizational culture as a principal aspect of an organization's functioning and a critical driver of effectiveness (e.g., Schein, 1983, Schein, 1984, Schein, 1985 and Schein, 1992). Manifested in the shared fundamental beliefs and assumptions, values, attitudes, and behaviors of the organization's members, culture is theorized to be the prime factor (1) shaping organizational procedures (Deal & Kennedy, 1982; Jarnagin & Slocum, 2007), (2) unifying organizational capabilities into a cohesive whole (Day, 1994), (3) providing solutions to the problems faced by the organization (Schein, 1984), and, thereby, (4) hindering or facilitating the organization's achievement of its goals (Denison, 1990). Furthermore, given its inherently “socially complex” and “causally ambiguous” nature, a comparative advantage gained through a culture-driven organizational capability is usually difficult to imitate, thus constituting a valuable source of sustained competitive advantage and superior performance (Barney, 1986, Hall, 1993, Peteraf, 1993 and Wernerfelt, 1984). Accordingly, researchers have presented empirical studies to characterize the organizational culture phenomenon and its impacts on organizational processes and outcomes, particularly on effectiveness (e.g., Carmeli & Tishler, 2004; Cooke & Rousseau, 1988; Denison & Mishra, 1995; Hofstede, Neuijen, Ohayr, & Sanders, 1990; Jermier, Slocum, Fry, & Gaines, 1991; O’Reilly, 1991; Powell & Dent-Micallef, 1997).1 From a managerial standpoint, these efforts have produced valuable insights pertaining to the roles of specific cultural traits as predictors of effectiveness, drivers of organizational change, and bases of comparison between highly productive firms and less productive ones. The present study aims to extend and expand the state of knowledge in this emerging paradigm that links organizational culture elements with effectiveness. Specifically, we present evidence with regard to the following relatively under-researched areas. First, note that, given the broad conceptualization of the construct of organizational culture, researchers have generally focused on a selected (and inevitably limited) set of cultural traits and examined their effects on (another, restricted set of) selected performance indicators. As Denison and Mishra (1995) assert, however, culture influences a wide variety of performance indicators through a multitude of mechanisms. In addition, each culture trait relate to specific measures of performance in its own unique way. Accordingly, to facilitate the development of a more general theory of organizational culture and effectiveness, we employ a broader set of culture traits in our research and examine their effects on multiple dimensions of effectiveness. Second, in addition to the direct effects of specific culture traits, we investigate the impacts of putting excessive focus on some cultural traits and relatively less emphasis on others, that is, an imbalanced combination of critical culture traits, on organizational effectiveness. Culture theoreticians have repeatedly noted the paradoxical nature of organizational functioning and relevant cultural orientations (e.g., Cameron, 1986, Denison, 1990, Fisher, 1997 and Quinn, 1988). This view suggests that, to compete effectively, all organizations face a number of contradictory challenges. Most notably, organizations need to simultaneously complement internal integration and coordination with external adaptability, attain a balanced composition of stability and flexibility, and blend top-down control with bottom-up involvement. Unless such paradoxical pressures are managed with a balanced composition of pertinent cultural traits, the organization may easily become ineffective by attending “to one challenge or need exclusively to the point of dysfunction” ( Denison, 1990 and Cameron, 1986: p. 12). We investigate the viability of this “balanced culture” hypothesis. And third, our research also responds to calls by many researchers (e.g., Denison et al., 2003a and Denison et al., 2003b) to investigate the organizational culture phenomenon in different cultural contexts, particularly in non-western nations. Research examining the extant theoretical postulates in a multitude of industries and different cultural contexts, and most importantly in emerging economies, is likely to improve our understanding of the global dimensions of the link between organizational culture and effectiveness. Our study presents evidence with regard to the organizational culture → effectiveness link using (multiple informant) data from 100 firms representing 18 major manufacturing industries in Turkey. Note that firms in Turkey operate in a volatile economy with highly unstable growth and inflation rates, and therefore different effectiveness outcomes from those reported previosly can be expected in this particular empirical context. Our empirical analyses are based on Denison's theory of organizational culture and effectiveness (Denison, 1990 and Denison, 2000; Denison, Cho, and Young, 2000; Denison & Mishra, 1995; Denison & Neale, 1996). This framework focuses on four broadly defined cultural traits – involvement, consistency, adaptability, and mission – as key determinants of business performance. Using data from 1176 informants from the 100 sampled firms, we test the individual and combined effects of these four broad cultural traits on several dimensions of firm performance, i.e., financial performance indicators, market-based performance indicators, quality improvements, innovativeness, and employee satisfaction. Denison (2000) contends that the four major cultural traits of involvement, consistency, adaptability, and mission highlight major tensions or contradictions faced by modern organizations to perform effectively—most specifically, the trade-offs between stability and flexibility and between internal focus and external focus. We therefore turn our attention to the dynamic contradictions between the four traits next and examine the extent to which an imbalanced combination of these traits affects firm-level performance indicators. To these ends, we first provide a brief overview of Denison's model and develop rationales for our hypotheses. Next, we present the sampling, data collection, and analyses procedures employed in the study. Finally, we discuss the implications of our findings.

Overall, the results are in line with the view that each of the cultural traits of involvement, consistency, adaptability, and mission influence firm effectiveness. Managers aiming to improve a broad spectrum of effectiveness measures should therefore focus on increasing their organizations’ scores on all trait measures and not just one or two. The study also provides insights regarding the balanced culture hypothesis. We show that, while imbalances between adaptability and mission and between involvement and consistency exert the expected negative effects on relevant measures of firm effectiveness, imbalances between mission and involvement and between adaptability and consistency may in fact improve certain effectiveness measures. That is, whereas for the former pairs of cultural traits opting for balance may improve effectiveness, for the latter pairs of traits some reasonable level of imbalance might in fact yield even better performance outcomes. Further analyses reveal that, considering the trait pairs of adaptability and consistency, the directionality of the imbalance also matters in that more of adaptability in comparison to consistency yields better performance outcomes. Note that these results are largely free from same-source effects and single informant biases that seem to have been major issues in prior culture research. Our study, therefore, (1) presents credible evidence with regard to the critical importance of organizational culture elements for effective functioning and (2) provides further insights and raises several questions for future research regarding the balanced culture hypothesis and how balances/imbalances in pairs of culture traits relate to organizational performance.