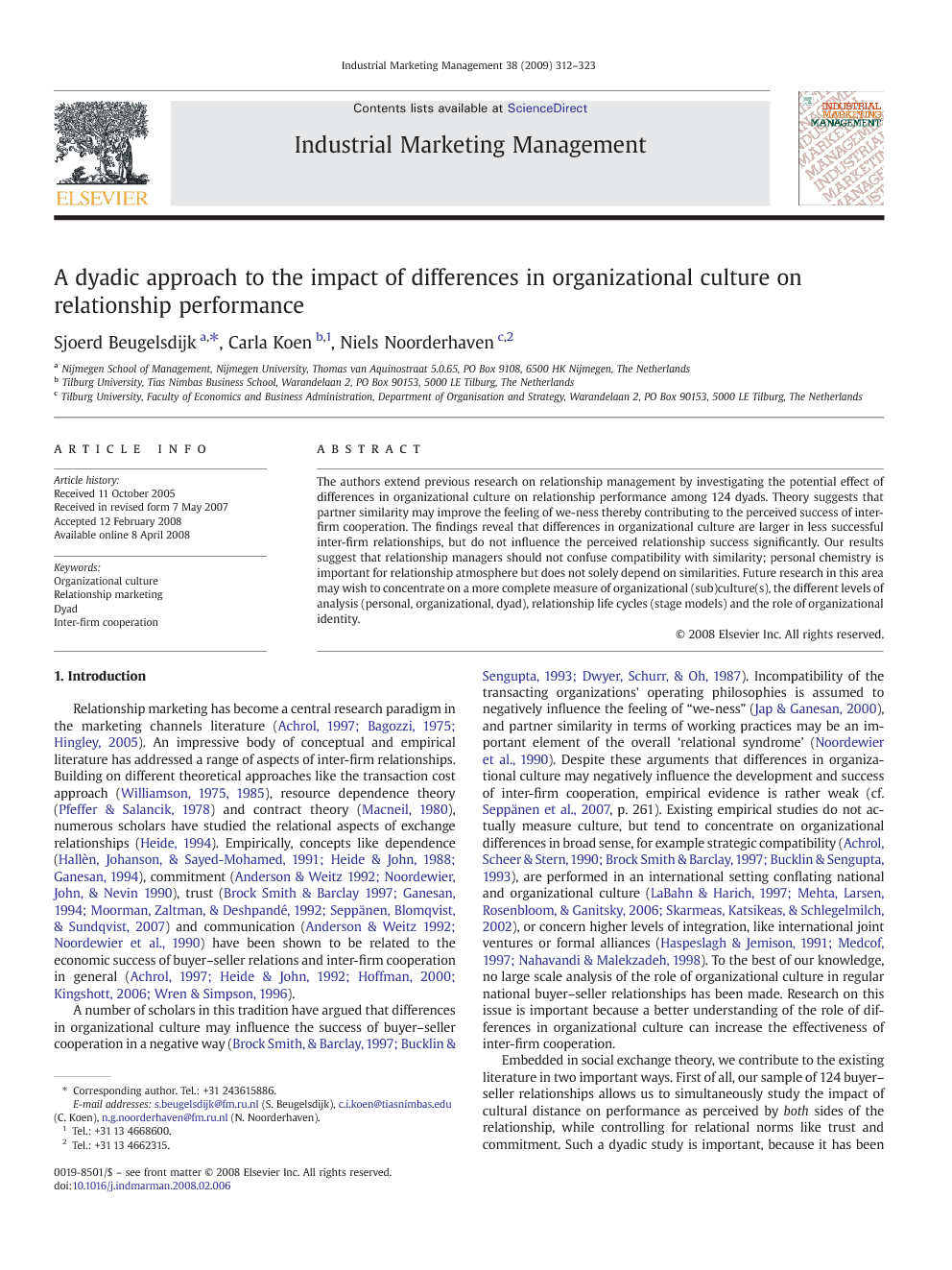 Relationship marketing has become a central research paradigm in the marketing channels literature (Achrol, 1997, Bagozzi, 1975 and Hingley, 2005). An impressive body of conceptual and empirical literature has addressed a range of aspects of inter-firm relationships. Building on different theoretical approaches like the transaction cost approach (Williamson, 1975 and Williamson, 1985), resource dependence theory (Pfeffer & Salancik, 1978) and contract theory (Macneil, 1980), numerous scholars have studied the relational aspects of exchange relationships (Heide, 1994). Empirically, concepts like dependence (Hallèn et al., 1991, Heide and John, 1988 and Ganesan, 1994), commitment (Anderson and Weitz, 1992 and Noordewier et al., 1990), trust (Brock Smith and Barclay, 1997, Ganesan, 1994, Moorman et al., 1992 and Seppänen et al., 2007) and communication (Anderson and Weitz, 1992 and Noordewier et al., 1990) have been shown to be related to the economic success of buyer–seller relations and inter-firm cooperation in general (Achrol, 1997, Heide and John, 1992, Hoffman, 2000, Kingshott, 2006 and Wren and Simpson, 1996). A number of scholars in this tradition have argued that differences in organizational culture may influence the success of buyer–seller cooperation in a negative way (Brock Smith and Barclay, 1997, Bucklin and Sengupta, 1993 and Dwyer et al., 1987). Incompatibility of the transacting organizations' operating philosophies is assumed to negatively influence the feeling of “we-ness” (Jap & Ganesan, 2000), and partner similarity in terms of working practices may be an important element of the overall ‘relational syndrome’ (Noordewier et al., 1990). Despite these arguments that differences in organizational culture may negatively influence the development and success of inter-firm cooperation, empirical evidence is rather weak (cf. Seppänen et al., 2007, p. 261). Existing empirical studies do not actually measure culture, but tend to concentrate on organizational differences in broad sense, for example strategic compatibility (Achrol et al., 1990, Brock Smith and Barclay, 1997 and Bucklin and Sengupta, 1993), are performed in an international setting conflating national and organizational culture (LaBahn and Harich, 1997, Mehta et al., 2006 and Skarmeas et al., 2002), or concern higher levels of integration, like international joint ventures or formal alliances (Haspeslagh and Jemison, 1991, Medcof, 1997 and Nahavandi and Malekzadeh, 1988). To the best of our knowledge, no large scale analysis of the role of organizational culture in regular national buyer–seller relationships has been made. Research on this issue is important because a better understanding of the role of differences in organizational culture can increase the effectiveness of inter-firm cooperation. Embedded in social exchange theory, we contribute to the existing literature in two important ways. First of all, our sample of 124 buyer–seller relationships allows us to simultaneously study the impact of cultural distance on performance as perceived by both sides of the relationship, while controlling for relational norms like trust and commitment. Such a dyadic study is important, because it has been shown that validity problems may arise regarding ‘sentiments’ variables when using only information from one side of the relationship (John & Reve, 1982). Dyadic studies require a careful methodological set up and we also show how future studies may wish to further develop such a set up to improve our understanding of the underlying drivers of the success of buyer–seller relationships. Secondly, we show that differences in organizational culture do not significantly affect the perceived success of inter-firm cooperation. This finding provides a renewed impetus to relationship marketing theory by suggesting a need for a more careful modelling of organizational cultural differences in social exchange theory. Our paper is structured in the following way. We first define organizational culture and subsequently theorize on the role of organizational cultural differences in explaining relationship performance against the background of the broader social exchange theory. We test our hypothesis on the negative effect of organizational cultural differences in a sample of 124 dyads while controlling for trust, commitment and communication. Finally, we summarize our findings, discuss the implications for theory, and provide ideas for future research. Given the exploratory nature of our research and the dyadic set up of our study, our managerial suggestions are speculative and also briefer than our suggestions for future research.