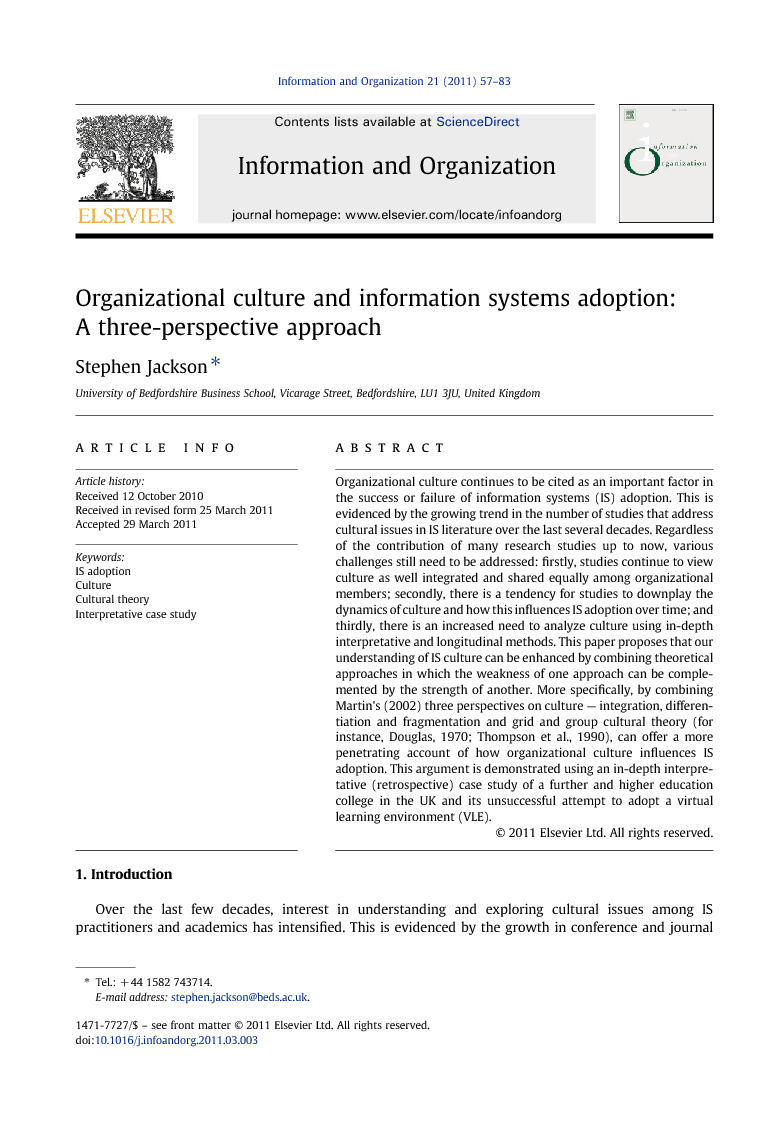 Organizational culture continues to be cited as an important factor in the success or failure of information systems (IS) adoption. This is evidenced by the growing trend in the number of studies that address cultural issues in IS literature over the last several decades. Regardless of the contribution of many research studies up to now, various challenges still need to be addressed: firstly, studies continue to view culture as well integrated and shared equally among organizational members; secondly, there is a tendency for studies to downplay the dynamics of culture and how this influences IS adoption over time; and thirdly, there is an increased need to analyze culture using in-depth interpretative and longitudinal methods. This paper proposes that our understanding of IS culture can be enhanced by combining theoretical approaches in which the weakness of one approach can be complemented by the strength of another. More specifically, by combining Martin's (2002) three perspectives on culture — integration, differentiation and fragmentation and grid and group cultural theory (for instance, Douglas, 1970; Thompson et al., 1990), can offer a more penetrating account of how organizational culture influences IS adoption. This argument is demonstrated using an in-depth interpretative (retrospective) case study of a further and higher education college in the UK and its unsuccessful attempt to adopt a virtual learning environment (VLE).

Over the last few decades, interest in understanding and exploring cultural issues among IS practitioners and academics has intensified. This is evidenced by the growth in conference and journal papers dedicated to its study. Davison and Martinsons (2003), for example, found a growing trend in the number of studies that address cultural issues in IS literature over the last several decades. One reason for this growth is attributed to the fact that too many IS adoption initiatives fail due to a misfit between culture and the IS introduced, or the failure of managers to understand culture and how this influences IS adoption practices. Moreover, culture is becoming increasingly important given the adoption of groupware applications, enterprise resource planning systems and other internet based systems by organizations, which support cross collaboration and require greater user participation at all levels. Many researchers have investigated cultural issues in IS research, as witnessed by the variety of topic areas. Leidner and Kayworth (2006), for instance, in conducting a systematic review of how culture has been applied in IS research found several distinct topics emerging from the literature, including: “(1) culture and IS development; (2) culture and IT adoption; (3) culture, IT use and outcomes; (4) culture, IT management, and strategy; (5) IT's influence on culture; and (6) IT culture”. As it would be unworkable to examine all these topics simultaneously, one topic of interest is exploring the relationship between organizational culture and IS adoption. Notwithstanding the importance of organizational culture in the context of IS adoption (Barrett, 1999, Cabrera et al., 2001, Davison and Martinsons, 2003, Gallivan and Srite, 2005, Hoffman and Klepper, 2000, Huang et al., 2003 and Leidner and Kayworth, 2006), this paper recognizes that the concept of culture, to date, has been used rather restrictively. Firstly, IS culture studies typically view culture as well integrated rather than pluralistic or ambiguous in nature. Secondly, existing studies tend to downplay the dynamics of culture, failing to understand how and why cultural values collide and shift over time. Thirdly, existing approaches tend to view culture more as a variable — something an organizational ‘has’ which can be objectively measured through surveys, rather than viewing it as something an organization ‘is’ using in-depth interpretative and longitudinal methods. This paper proposes that combining theoretical approaches – Martin's (2002) three perspectives on culture – integration, differentiation and fragmentation and grid and group cultural theory (for instance, Douglas, 1970 and Thompson et al., 1990), can provide a rich understanding of the multifaceted nature of culture and how culture influences IS adoption. Furthermore, the study recognizes that when the three perspectives are considered sequentially they can offer a more penetrating account of the cultural dynamics at work. This is illustrated using an in-depth case study of a further and higher education college in the UK and its failed attempt to adopt a VLE. This paper is organized as follows. First, the concept of organizational culture is introduced and explored more fully in relation to IS literature. Some of the main challenges faced in IS culture studies are explored. This is followed by research questions for this study. Next, the rationale for combining Martin's (2002) three perspectives on culture and grid and group cultural theory are justified. Next, a discussion of the research methods and data analysis techniques used for this study are outlined and followed by a discussion of the empirical results. Finally, implications, limitations and conclusions of the study are outlined.

The overarching aim of this study was to understand the relationship between organizational culture and IS adoption. Despite the growth in IS culture studies, this study recognizes that a number of challenges need to be overcome. Firstly, existing studies tend to view culture as well integrated or as a variable which can be easily maneuvered by managers, ignoring the pluralistic and ambiguous nature of culture; secondly, studies tend to downplay the importance of dynamics and how this affects IS adoption; thirdly, too often IS culture researchers have studied culture superficially using less sophisticated methods, at the expense of obtaining deep insights into the cultural milieu through thick description. This study found that combining theoretical approaches can be a useful way of addressing and understanding the multi-faceted nature of culture. More specifically, the study found advantages in combining Martin (2002) three perspectives on culture – integration, differentiation and fragmentation, and the ways of life – fatalism, individualism, egalitarianism and hierarchism, proposed by grid and group cultural theory. Each approach – standing alone – has inherent weaknesses which can be overcome by the other. Combining the two approaches can provide valuable insights into the inner workings of culture and how culture influences IS adoption practices. As this study demonstrates, during the initial stages of the project in 2002 the environment was characterized by an integrated egalitarian culture; shifting to subgroup conflict between the hierarchists and fatalists in 2003 (differentiation), and then to cultural ambiguity, as demonstrated through the individualistic tendencies of the user champions (fragmentation). Culture was not static over time; instead it was dynamic — passing from one perspective to another in a sequential fashion. Nevertheless, the case did point out that at certain points in time there may be perspective overlap. A key point raised is that by viewing culture from all three perspectives can provide a rich and vivid understanding of culture than any of the perspectives in isolation. Managers should be aware that culture at the organizational and subgroup level can strongly influence IS adoption and not all aspects of culture can by fully controllable; instead culture is always in the making (not made) and formed and reformed through social relations. Culture should not be viewed in a vacuum; instead it is pluralistic and actively contested between social relations. As this study shows, it was through ongoing social interaction between the various groups involved in the adoption of the VLE – the overwhelming power and control exerted by the senior management team, the fatalistic tendencies of academic staff (system users) and the individualistic nature of the user champions, which resulted in a very unresponsive gridlocked organization – an orientation which did not favor the adoption of the VLE.