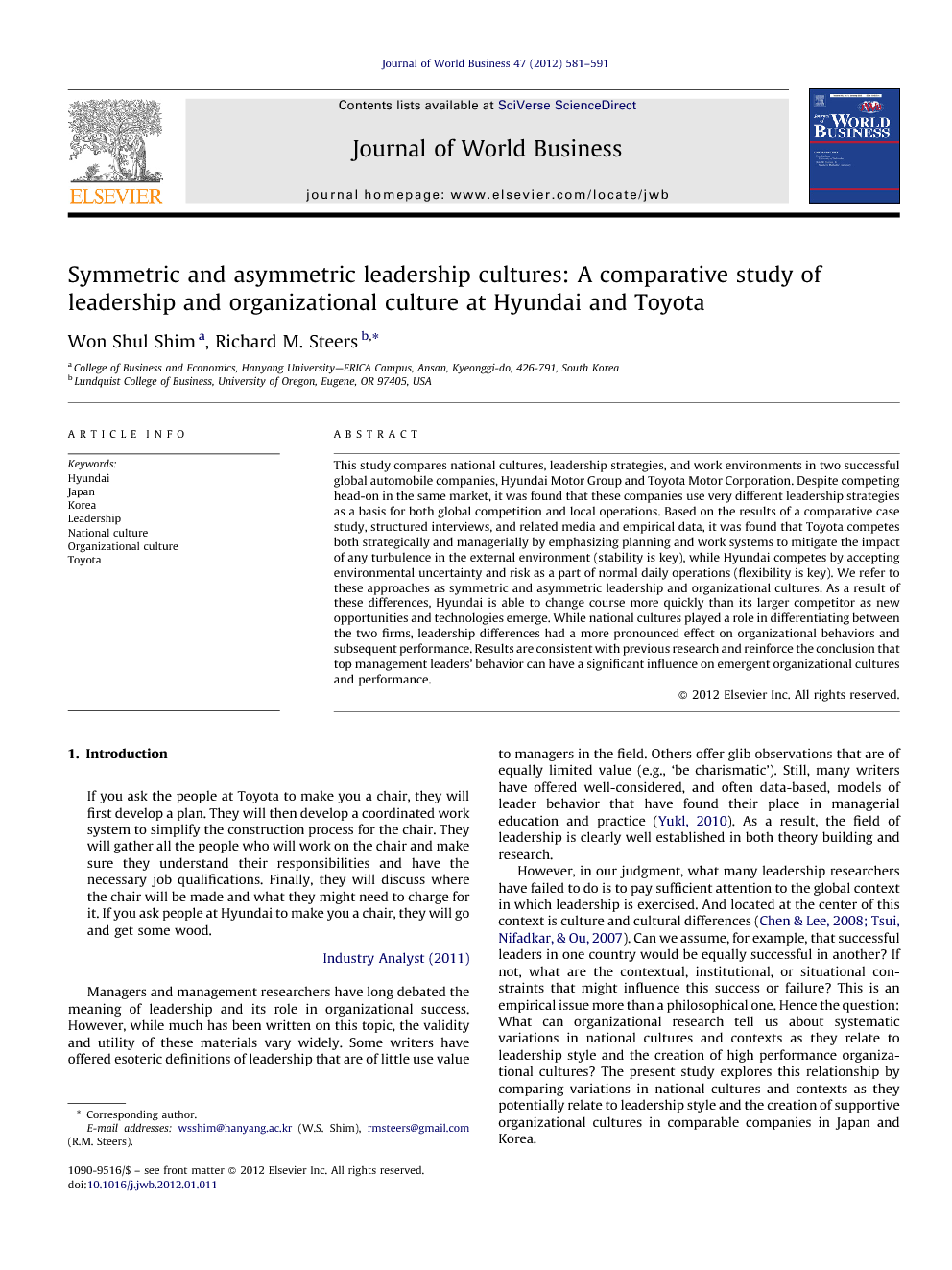 This study compares national cultures, leadership strategies, and work environments in two successful global automobile companies, Hyundai Motor Group and Toyota Motor Corporation. Despite competing head-on in the same market, it was found that these companies use very different leadership strategies as a basis for both global competition and local operations. Based on the results of a comparative case study, structured interviews, and related media and empirical data, it was found that Toyota competes both strategically and managerially by emphasizing planning and work systems to mitigate the impact of any turbulence in the external environment (stability is key), while Hyundai competes by accepting environmental uncertainty and risk as a part of normal daily operations (flexibility is key). We refer to these approaches as symmetric and asymmetric leadership and organizational cultures. As a result of these differences, Hyundai is able to change course more quickly than its larger competitor as new opportunities and technologies emerge. While national cultures played a role in differentiating between the two firms, leadership differences had a more pronounced effect on organizational behaviors and subsequent performance. Results are consistent with previous research and reinforce the conclusion that top management leaders’ behavior can have a significant influence on emergent organizational cultures and performance.

If you ask the people at Toyota to make you a chair, they will first develop a plan. They will then develop a coordinated work system to simplify the construction process for the chair. They will gather all the people who will work on the chair and make sure they understand their responsibilities and have the necessary job qualifications. Finally, they will discuss where the chair will be made and what they might need to charge for it. If you ask people at Hyundai to make you a chair, they will go and get some wood. Industry Analyst (2011) Managers and management researchers have long debated the meaning of leadership and its role in organizational success. However, while much has been written on this topic, the validity and utility of these materials vary widely. Some writers have offered esoteric definitions of leadership that are of little use value to managers in the field. Others offer glib observations that are of equally limited value (e.g., ‘be charismatic’). Still, many writers have offered well-considered, and often data-based, models of leader behavior that have found their place in managerial education and practice (Yukl, 2010). As a result, the field of leadership is clearly well established in both theory building and research. However, in our judgment, what many leadership researchers have failed to do is to pay sufficient attention to the global context in which leadership is exercised. And located at the center of this context is culture and cultural differences (Chen and Lee, 2008 and Tsui et al., 2007). Can we assume, for example, that successful leaders in one country would be equally successful in another? If not, what are the contextual, institutional, or situational constraints that might influence this success or failure? This is an empirical issue more than a philosophical one. Hence the question: What can organizational research tell us about systematic variations in national cultures and contexts as they relate to leadership style and the creation of high performance organizational cultures? The present study explores this relationship by comparing variations in national cultures and contexts as they potentially relate to leadership style and the creation of supportive organizational cultures in comparable companies in Japan and Korea.