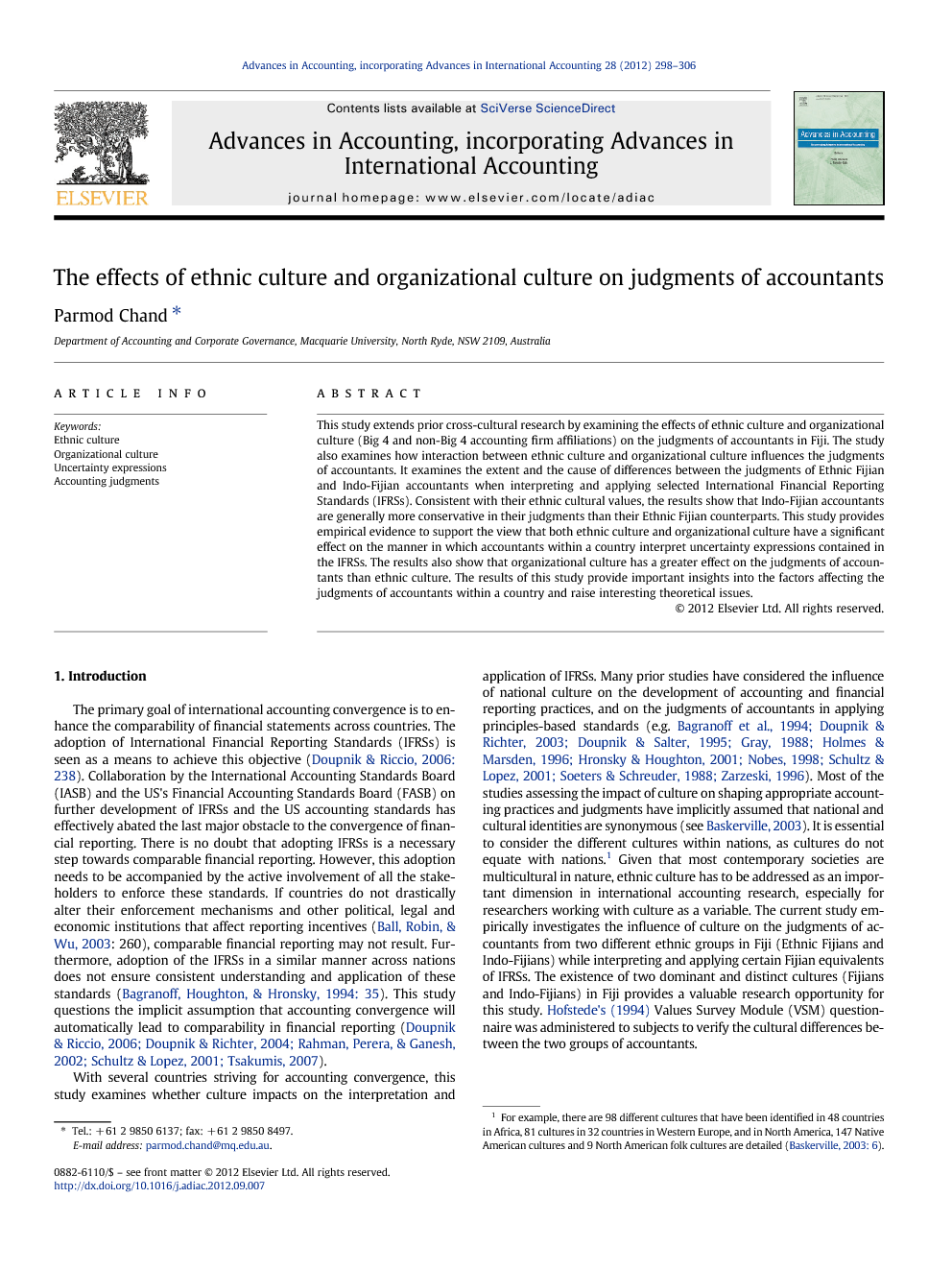 The primary goal of international accounting convergence is to enhance the comparability of financial statements across countries. The adoption of International Financial Reporting Standards (IFRSs) is seen as a means to achieve this objective (Doupnik & Riccio, 2006: 238). Collaboration by the International Accounting Standards Board (IASB) and the US's Financial Accounting Standards Board (FASB) on further development of IFRSs and the US accounting standards has effectively abated the last major obstacle to the convergence of financial reporting. There is no doubt that adopting IFRSs is a necessary step towards comparable financial reporting. However, this adoption needs to be accompanied by the active involvement of all the stakeholders to enforce these standards. If countries do not drastically alter their enforcement mechanisms and other political, legal and economic institutions that affect reporting incentives (Ball, Robin, & Wu, 2003: 260), comparable financial reporting may not result. Furthermore, adoption of the IFRSs in a similar manner across nations does not ensure consistent understanding and application of these standards (Bagranoff, Houghton, & Hronsky, 1994: 35). This study questions the implicit assumption that accounting convergence will automatically lead to comparability in financial reporting (Doupnik and Riccio, 2006, Doupnik and Richter, 2004, Rahman et al., 2002, Schultz and Lopez, 2001 and Tsakumis, 2007). With several countries striving for accounting convergence, this study examines whether culture impacts on the interpretation and application of IFRSs. Many prior studies have considered the influence of national culture on the development of accounting and financial reporting practices, and on the judgments of accountants in applying principles-based standards (e.g. Bagranoff et al., 1994, Doupnik and Richter, 2003, Doupnik and Salter, 1995, Gray, 1988, Holmes and Marsden, 1996, Hronsky and Houghton, 2001, Nobes, 1998, Schultz and Lopez, 2001, Soeters and Schreuder, 1988 and Zarzeski, 1996). Most of the studies assessing the impact of culture on shaping appropriate accounting practices and judgments have implicitly assumed that national and cultural identities are synonymous (see Baskerville, 2003). It is essential to consider the different cultures within nations, as cultures do not equate with nations.1 Given that most contemporary societies are multicultural in nature, ethnic culture has to be addressed as an important dimension in international accounting research, especially for researchers working with culture as a variable. The current study empirically investigates the influence of culture on the judgments of accountants from two different ethnic groups in Fiji (Ethnic Fijians and Indo-Fijians) while interpreting and applying certain Fijian equivalents of IFRSs. The existence of two dominant and distinct cultures (Fijians and Indo-Fijians) in Fiji provides a valuable research opportunity for this study. Hofstede's (1994) Values Survey Module (VSM) questionnaire was administered to subjects to verify the cultural differences between the two groups of accountants. This study uses questionnaire surveys to empirically test the extent and the cause of differences between the judgments of Ethnic Fijian and Indo-Fijian accountants when interpreting and applying certain IFRSs which contain uncertainty expressions. First, this study investigates the influence of ethnic culture on professional accountants' application of accounting rules within Fiji, in the context of Gray's (1988) accounting value of conservatism.2 It is expected that the interpretation of uncertainty expressions contained in the IFRSs might be affected by the degree of conservatism shared by Ethnic Fijian and Indo-Fijian accountants. Second, the study examines the influence of organizational culture on the judgments of accountants in Fiji. It is expected that the accountants in the Big 4 firms may interpret and apply accounting standards that require the exercise of professional judgments differently from those in the non-Big 4 firms. Third, this study also examines the interaction between ethnic culture and organizational culture in influencing the judgments of accountants. It is expected that the similarities in the organizational culture, particularly of the Big 4 firms, will moderate the effects of the ethnic culture of its accountants. Fourth, the influence of other variables including professional accountants' gender, age, level of formal education, years of work experience, level of familiarity with the Fijian equivalents of the IFRSs and the perceived level of complexity associated with the practical scenarios used in this study are also examined. Cross-cultural accounting researchers (such as Baskerville, 2003, Chow et al., 2002 and Harrison and McKinnon, 1999) have stressed the need to go beyond the aggregate cross-national level of analysis and explore cultural differences at organizational levels and within-national level. In response to this call, the findings of this study provide insights on the impact of both ethnic culture and organizational culture on the judgments of accountants within a country. Countries adopting the IFRSs should consider whether the IFRSs that have been adopted are applied in a consistent manner within their respective jurisdictions. The empirical results of this study will also provide evidence to assist in understanding the cultural and non-cultural factors that cause differences in the judgments of accountants when interpreting and applying a set of accounting standards within a country. An understanding of these factors should facilitate the move towards the convergence of accounting practices, thereby improving the quality and comparability of international accounting information, systems and procedures. The ultimate aim of convergence is to ensure that the financial reports of companies in different countries are comparable, but if IFRSs are not applied in a consistent manner, then comparable financial reports will not result even if countries have adopted the IFRSs.