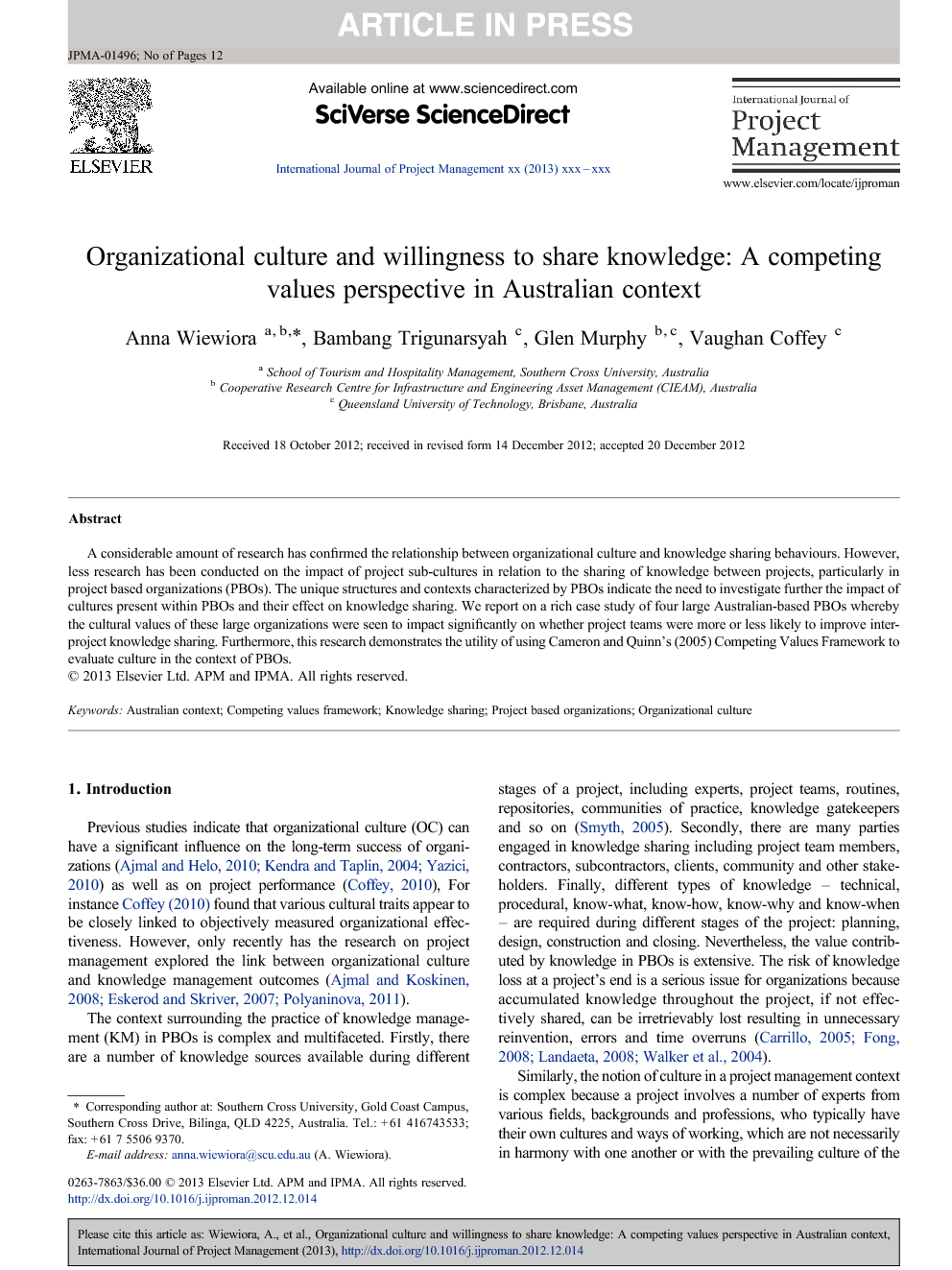 A considerable amount of research has confirmed the relationship between organizational culture and knowledge sharing behaviours. However, less research has been conducted on the impact of project sub-cultures in relation to the sharing of knowledge between projects, particularly in project based organizations (PBOs). The unique structures and contexts characterized by PBOs indicate the need to investigate further the impact of cultures present within PBOs and their effect on knowledge sharing. We report on a rich case study of four large Australian-based PBOs whereby the cultural values of these large organizations were seen to impact significantly on whether project teams were more or less likely to improve inter-project knowledge sharing. Furthermore, this research demonstrates the utility of using Cameron and Quinn's (2005) Competing Values Framework to evaluate culture in the context of PBOs.

Previous studies indicate that organizational culture (OC) can have a significant influence on the long-term success of organizations (Ajmal and Helo, 2010, Kendra and Taplin, 2004 and Yazici, 2010) as well as on project performance (Coffey, 2010), For instance Coffey (2010) found that various cultural traits appear to be closely linked to objectively measured organizational effectiveness. However, only recently has the research on project management explored the link between organizational culture and knowledge management outcomes (Ajmal and Koskinen, 2008, Eskerod and Skriver, 2007 and Polyaninova, 2011). The context surrounding the practice of knowledge management (KM) in PBOs is complex and multifaceted. Firstly, there are a number of knowledge sources available during different stages of a project, including experts, project teams, routines, repositories, communities of practice, knowledge gatekeepers and so on (Smyth, 2005). Secondly, there are many parties engaged in knowledge sharing including project team members, contractors, subcontractors, clients, community and other stakeholders. Finally, different types of knowledge – technical, procedural, know-what, know-how, know-why and know-when – are required during different stages of the project: planning, design, construction and closing. Nevertheless, the value contributed by knowledge in PBOs is extensive. The risk of knowledge loss at a project's end is a serious issue for organizations because accumulated knowledge throughout the project, if not effectively shared, can be irretrievably lost resulting in unnecessary reinvention, errors and time overruns (Carrillo, 2005, Fong, 2008, Landaeta, 2008 and Walker et al., 2004). Similarly, the notion of culture in a project management context is complex because a project involves a number of experts from various fields, backgrounds and professions, who typically have their own cultures and ways of working, which are not necessarily in harmony with one another or with the prevailing culture of the entire project (Ajmal and Koskinen, 2008). These cultural differences can either be a source of creativity and broad perspectives on organizational issues or they can be a source of difficulty and miscommunication (Anbari et al., 2010). It is therefore important that those within PBOs are aware of the type of cultures evident within various projects in order to better predict the potential consequences of cultural-related behaviours on knowledge sharing outcomes and arguably, on overall project performance. The concepts of OC and KM as foundations to understanding how organizations behave and gain competitive advantage both have strong theoretical and empirical support (Alavi et al., 2006, Davenport and Prusak, 1998, De Long and Fahey, 2000 and Sackmann, 1992). These two concepts are highly related and existing research suggests in the main that OC underpins KM activities (Gray and Densten, 2005). To be truly effective, KM requires an understanding of the culture in which it is embedded (De Long and Fahey, 2000 and Fong and Kwok, 2009) and this is imperative because OC shapes members' knowledge sharing behaviours and influences how they learn. Overall, some cultural values encourage and others impede KM activities (De Long and Fahey, 2000 and Janz and Prasarnphanich, 2003). However, examining the two concepts of OC and KM in PBOs is especially challenging due to their complexity, multidimensional nature and context dependency. Yazici (2010) highlights that in a project management context, OC is still largely under-examined. Currently very little is known about how OC contributes to the willingness for knowledge sharing between projects. The purpose of this research is to extend previous theory on organizational culture and knowledge management in project environment and explore which cultural values are more likely to drive inter-project knowledge sharing behaviours in the context of Australian PBOs.