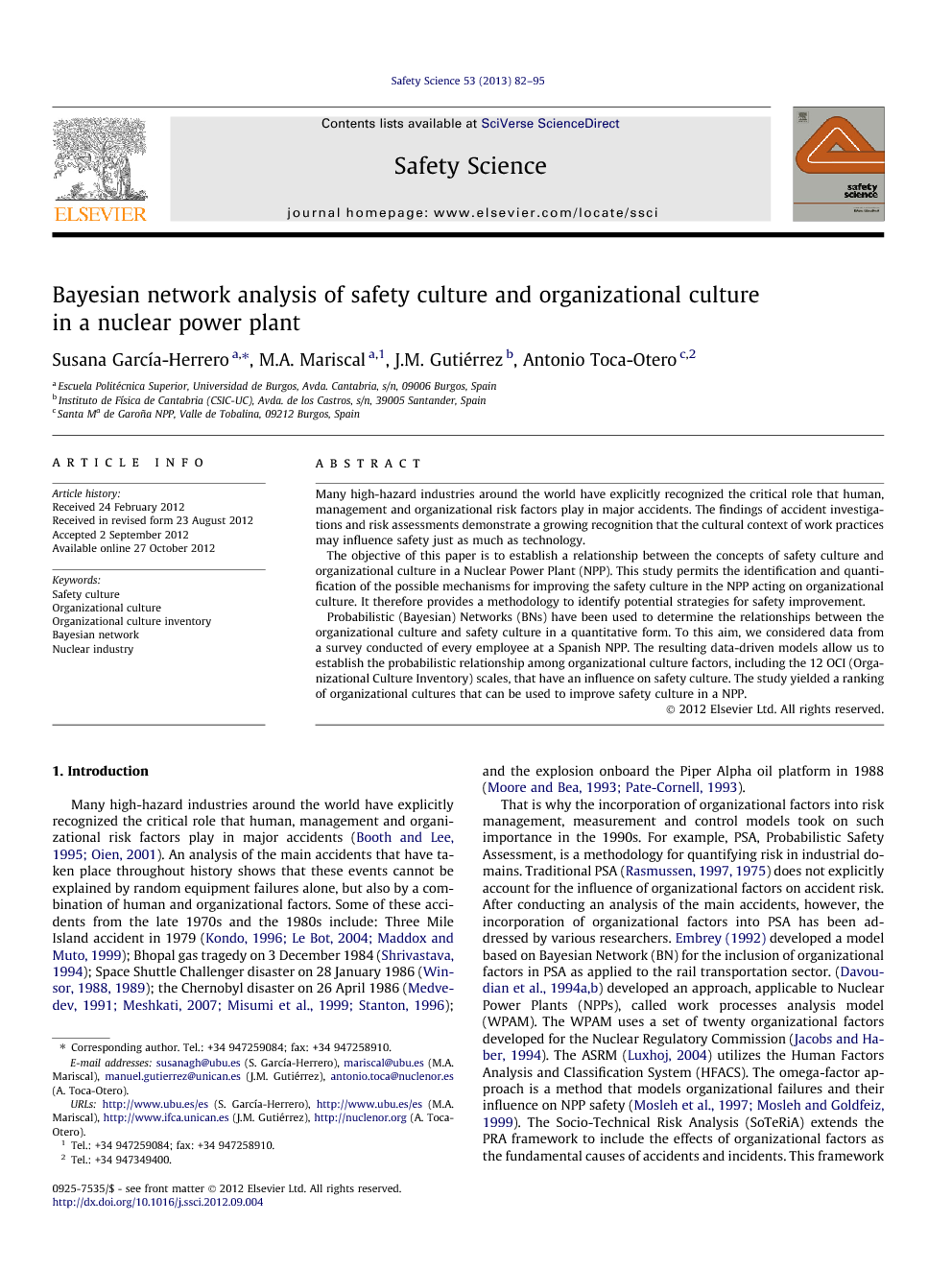 The study presented used probabilistic Bayesian network models to analyze the influence exerted by each of the organizational cultures on safety culture in a NPP. First, it seems that the constructive styles are those that have the greatest influence on the safety culture results. In contrast, the defensive styles do not, in general, exhibit a clear relationship with safety culture. This does not mean that we should forget the defensive style to improve safety culture; the detailed analysis, made with each norm, and above all the global model carried out in this study shows how defensive styles also contribute to improving safety culture. The detailed studies of the four constructive cultural norms (humanistic, affiliative, achievement and self-actualizing) reflect the specific actions that serve to enhance the safety culture in the NPP. Thus, in the humanistic culture, we note the following actions: worrying about the needs of others, involving others in the decisions that affect them, resolving conflicts constructively and being supportive of others and rewarding others. The most influential behaviors in the affiliative culture are: collaborating with others, treating others in a friendly and pleasant manner, thinking in terms of satisfying the group, showing concern for people and behaving tactfully. In the achievement culture, adhering to standards of excellence and knowing the company’s activity are vital to improving the SC. Lastly, in the self-actualizing culture, the behaviors that reinforce the SC are resisting conformism, communicating ideas, being open with oneself and enjoying work. Analyzing the defensive styles even further, we note the existence of four different behaviors. First, the cultural norms that do not correlate: the approval culture, the conventional culture, the power culture and the competitive culture. Second, those that show how specific actions enhance the safety culture, such as the dependent culture. Third include those that are inversely related to safety culture, such as the avoidance culture. And lastly involves those featuring variables that favor and oppose the safety culture, such as the oppositional and perfectionistic culture. Below are the specified defensive actions that enhance or harm the safety culture in the NPP. In the dependent culture, reviewing decisions with superiors enhances the safety culture. The avoidance culture exhibits an inverse relationship with safety culture, which are realized in actions such as: keeping out of sight when difficult situations arise and never being the one blamed for mistakes. Within the oppositional culture, looking for errors, adopting an impartial and completely objective attitude, and pointing out flaws, help to improve the safety culture; on the other hand, remaining on the sidelines is a type of behavior that does not favor the safety culture. In the perfectionistic culture a behavior that is directly related to the safety cultures is diligence and persistence. Finally, a global model has been constructed in order to identify the behaviors that play the greatest role in improving SC. This model involves all of the organizational cultural norms and includes the most relevant variables having thus been identified in the detailed studies. These most influential behaviors on SC, classified by cultures, are specified below. Within the humanistic culture are: resolving conflicts constructively, involving others in those decisions that affect them, worrying about the needs of others and being supportive of them. In the affiliative culture the following stand out: collaborating with others, treating others in a friendly and pleasant manner and thinking in terms of satisfying the group. Negative influences in the avoidance culture include: keeping out of sight when difficult situations arise and avoiding being blamed for mistakes. In the oppositional culture, looking for errors, pointing out flaws and not remaining on the sidelines have an exceedingly high influence on SC. Within the achievement culture includes knowing the company’s activity. And lastly, in the self-actualizing culture, communicating ideas. The principal advances of knowledge made with the approach, developed in the present research, are the identification of the three principal norms and behaviors necessaries to achieve maximum results in safety culture. These behaviors, classified in order of importance, are: looking for errors, not keeping out of sight when difficult situations arise, and resolving conflicts constructively. In addition the model shows others behaviors that also contribute to improve safety culture. Taking steps to improve these behaviors has been identified as paving the way to enhancing safety culture at a NPP. For future research it would be advisable to compare safety culture and organizational culture in others companies. It would be interesting to know if the organizational cultural norms have the same influence in safety culture in chemical, manufacturing, mining and others industries.