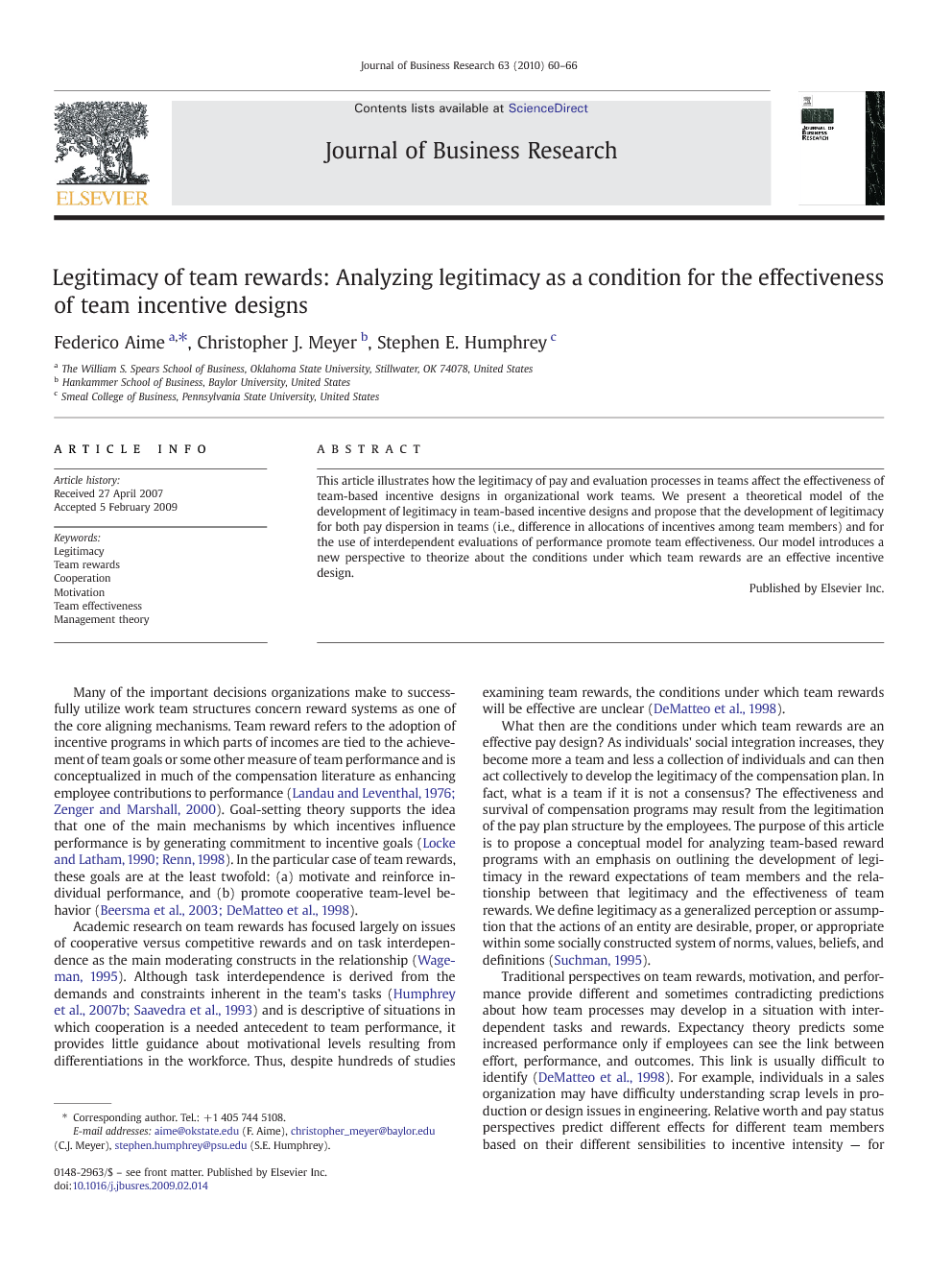 This article illustrates how the legitimacy of pay and evaluation processes in teams affect the effectiveness of team-based incentive designs in organizational work teams. We present a theoretical model of the development of legitimacy in team-based incentive designs and propose that the development of legitimacy for both pay dispersion in teams (i.e., difference in allocations of incentives among team members) and for the use of interdependent evaluations of performance promote team effectiveness. Our model introduces a new perspective to theorize about the conditions under which team rewards are an effective incentive design.

Organizations and students of organizations are puzzled by the fact that organizations are becoming more thoroughly interconnected and yet more intricately partitioned. Technical and managerial knowledge has become ever more specific and differentiated over the past two decades, and organizations require concurrent effort of many diverse sets of employees to tackle increasing complexity. Thus, team-based work has become a priority of organizations and organizational researchers (Ilgen, 1999 and Rau, 2006). Moreover, these teams have extended their time horizons beyond constrained project durations, developing a need for self-actualization and sustainability over time. Legitimacy of pay dispersion is important to the team as well as to the organization. Legitimacy provides the opportunity for the organization to institute a normative process for different reward structures. As Ashforth and Gibbs (1989) tell us, this legitimacy is a double-edged sword. The organization or team is afforded legitimacy through the consensus of the membership, but pursuit of legitimacy can make the organization seem manipulative and illegitimate. There is then a fine line to walk in the pursuit of legitimacy, especially when it comes to the outcomes that one receives from the organization. Team incentives or rewards have been widely studied during the last three decades. However, most of the research focuses on individual drivers for team performance; the complexity of the collective mechanisms that may affect team rewards has seldom been examined. An important contribution of this model is the use of legitimation as a framework to contextualize the mechanisms by which team rewards affect outcomes at the team level and may help outline empirical strategies to close the gap that casts doubt about when, how, and to what degree dispersion in pay and incentives help or constrain collective performance. Legitimation provides an explanation of individual behaviors in the context of teams and addresses processes that predict behaviors, which may help integrate some conflicting results from previous research on team rewards. It addresses the DeMatteo et al. (1998) call to address the question of how and why rewards should affect team functioning and under what circumstances they will be most effective. Interaction between the allocation and evaluation components of team rewards is not clearly specified and studied in most of the team rewards research, which may also be a reason for some of the variability in findings. The guidance that the explicit description of this interaction and of the team mechanisms that affect it may be another contribution that this model provides to future research on team rewards. Designs of incentive programs for teams may benefit from considering both interdependence and the need for individual differentiation of team members. Looking at the reference structures available for team members may help define team membership and roles in a more effective way (Humphrey et al., 2009), provide an economic balance to the distribution of available resources, and guide implementation in terms of the need to (a) promote the salience of some specific referential structures and (b) explicitly manipulate social psychological distance in the team. In summary, the current theorizing makes several contributions to the literature: (1) we enhanced research on team rewards and pay dispersion effects by integrating team-level theories of legitimacy and P–G fit in a predictive model of pay effectiveness, (2) we provided a generalizable model for analyzing team reward configurations across cultures and within the dynamics of team developments over time, and (3) we augmented the person–environment literature by modeling its possible contribution to the justice or legitimacy literature and therefore its additional value to models of team performance.