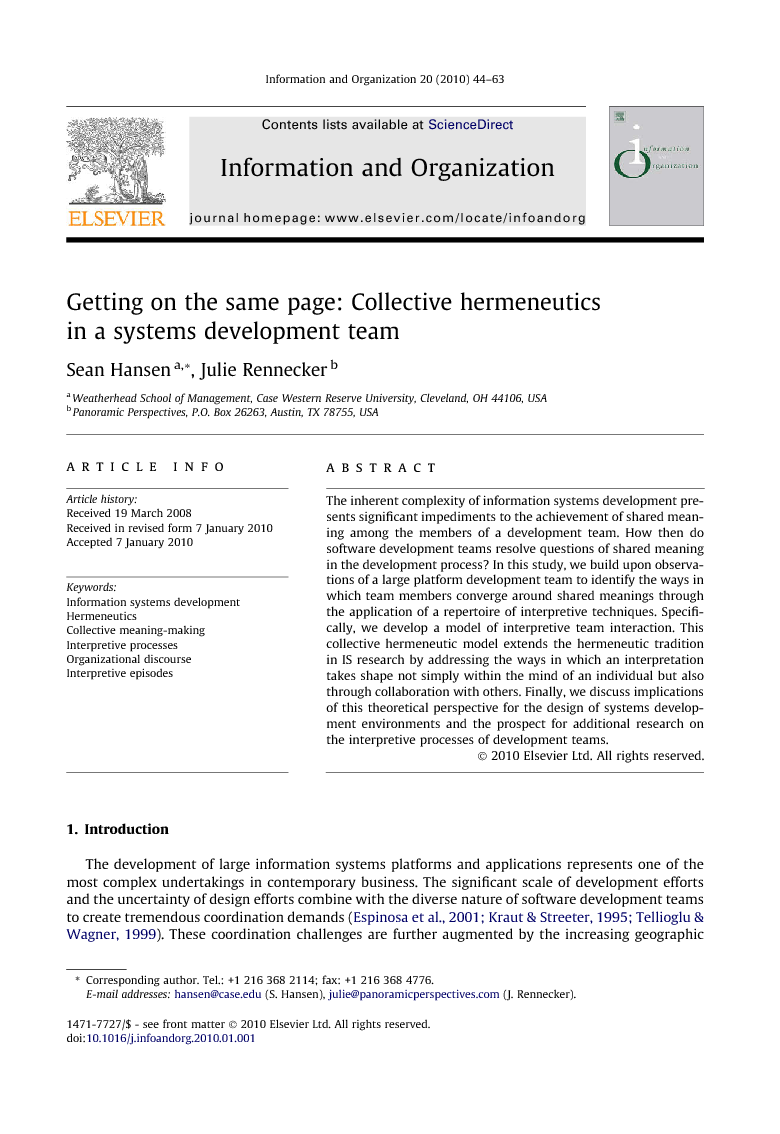 The inherent complexity of information systems development presents significant impediments to the achievement of shared meaning among the members of a development team. How then do software development teams resolve questions of shared meaning in the development process? In this study, we build upon observations of a large platform development team to identify the ways in which team members converge around shared meanings through the application of a repertoire of interpretive techniques. Specifically, we develop a model of interpretive team interaction. This collective hermeneutic model extends the hermeneutic tradition in IS research by addressing the ways in which an interpretation takes shape not simply within the mind of an individual but also through collaboration with others. Finally, we discuss implications of this theoretical perspective for the design of systems development environments and the prospect for additional research on the interpretive processes of development teams.

The development of large information systems platforms and applications represents one of the most complex undertakings in contemporary business. The significant scale of development efforts and the uncertainty of design efforts combine with the diverse nature of software development teams to create tremendous coordination demands (Espinosa et al., 2001, Kraut and Streeter, 1995 and Tellioglu and Wagner, 1999). These coordination challenges are further augmented by the increasing geographic and temporal distribution of development team members (Herbsleb and Mockus, 2003 and Im et al., 2005). Not surprisingly, software development has been repeatedly described as an inherently social process (Faraj and Sproull, 2000 and Hirschheim et al., 1995), rather than a merely technical one. The development team for a large information system requires representation from a range of specialty skill domains, including project managers, analysts, programmers, and network support personnel. Indeed, for very large initiatives, multiple teams are engaged, each focused on a particular aspect of the final system. In addition, development teams must interact with myriad other organizational members as they design, develop, and implement software resources. With each layer of organizational complexity, the challenges of interpersonal and group dynamics are increased (Curtis et al., 1988 and Roberts et al., 2004). Development teams employ a wide range of formal processes and technical artifacts to manage their coordination demands (Im et al., 2005 and Tellioglu and Wagner, 1999). Such resources address the interdependence of development tasks and ensure that most of the development process can proceed without explicit debate over the collective understanding of task objectives. However, in a development process marked by inherent heterogeneity, questions of shared meaning are inevitable. When such circumstances arise, how do software development teams resolve questions of shared meaning in the development process? The current study explores the processes that software development teams employ to arrive at common understandings in the day-to-day conduct of their work. Specifically, we propose that development teams engage in a collective hermeneutic process to explore the variety of interpretations that exist around a given topic and to accomplish collective meaning-making so that the development process can proceed. Broadly understood, hermeneutics refers to the science (or art) of interpretation. While it has its origins in ancient thought, hermeneutics became the source of significant philosophical inquiry in the 20th century (Grondin, 1991). We argue that the process of meaning-making within development teams represents a collective approach to the interpretation of “texts” encountered in the design environment. Drawing upon the work of Ricoeur, 1979 and Ricoeur, 1991, we understand a text to mean something that must be interpreted. As such, a text may include traditional written artifacts as well as utterances or actions intended to convey some meaning within a given context. Similarly, we take discourse to mean a language event – i.e., the message produced through the use of language (Ricoeur, 1979). Taken together, these definitions suggest that a text is the embodiment of a discourse. Building upon an observational study of a software development team on a large platform project, we develop a model of the hermeneutic process that teams employ in the pursuit of collective meaning. In Section 2, we explore the context of software development and some of the challenges of achieving collective understanding. This is followed in Section 3 by a discussion of the literature on group meaning-making and the theoretical foundations for the model developed later in the paper. Section 4 presents the research effort conducted through observation of a large international software development team. Section 5 presents the study findings and the resulting model of a collective hermeneutic process. Section 6 offers a discussion of the key insights from the study and their implications for both the software development process and the study of information systems development. The study concludes with an acknowledgement of the limitations of the study and suggestions for further research.

The inherent complexity of large systems development efforts creates significant impediments to the establishment of shared meaning between members of a project team. Yet communication and coordination of effort remain essential for the effective execution of systems development initiatives. In this study, we have developed a model of the meaning-making efforts of a project team that is based on the concept of a collective hermeneutic process. Through its concerted application of a shared repertoire of interpretive techniques, the Topaz team reveals the ways in which a development team can work together toward resolving the ambiguities of their day-to-day collaboration. Our study illustrates that the need for such collective interpretive processes among the participants in a systems development effort is not limited to the dynamics of newly formed teams. Even among long-standing development teams, the pursuit of shared understanding of the environment and the objectives of the group is a persistent challenge and process to be nurtured. As they consider the adoption of new tools to support their collaborative efforts, development team leaders and participants must remain cognizant of opportunities for collective meaning-making that such resources may provide. They should also explore the ways in which their existing tool sets can be adapted to foster more fluid collective interpretive activity among group members. In addition to providing insight into the workings of contemporary system development teams, the collective hermeneutic model provides a foundational framework for further research into the meaning-making processes of development groups as well as other multi-disciplinary teams. As an exploratory study, this research calls for assessment of the collective hermeneutic model through application to a wider variety of systems development contexts. Are the interpretive processes observed in the creation of a large platform system applicable to the efforts of smaller project teams or those of in-house development projects? How does the degree of geographic distribution of a project team impact the hermeneutic techniques that its members employ? Similarly, what effect does the business context of a firm have on the interpretive mechanisms of its systems development personnel? The investigation of such issues will offer us a better understanding of how IS professionals come together around a shared vision of the future.