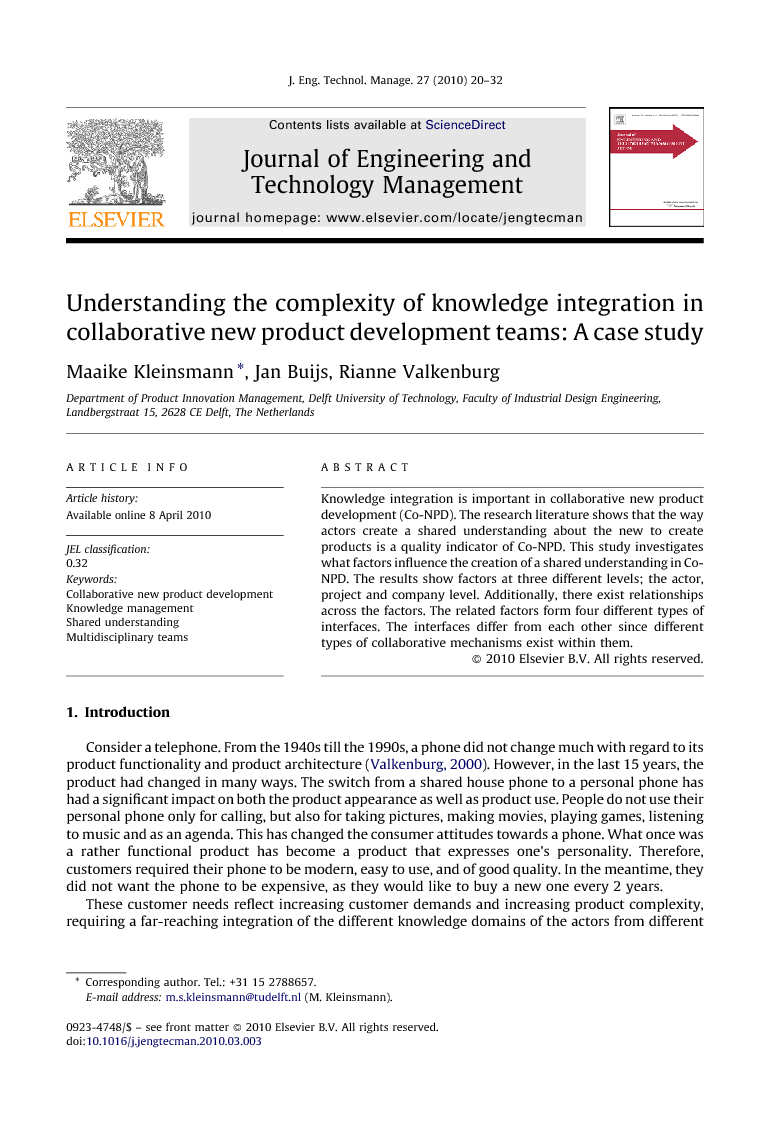 Knowledge integration is important in collaborative new product development (Co-NPD). The research literature shows that the way actors create a shared understanding about the new to create products is a quality indicator of Co-NPD. This study investigates what factors influence the creation of a shared understanding in Co-NPD. The results show factors at three different levels; the actor, project and company level. Additionally, there exist relationships across the factors. The related factors form four different types of interfaces. The interfaces differ from each other since different types of collaborative mechanisms exist within them.

Consider a telephone. From the 1940s till the 1990s, a phone did not change much with regard to its product functionality and product architecture (Valkenburg, 2000). However, in the last 15 years, the product had changed in many ways. The switch from a shared house phone to a personal phone has had a significant impact on both the product appearance as well as product use. People do not use their personal phone only for calling, but also for taking pictures, making movies, playing games, listening to music and as an agenda. This has changed the consumer attitudes towards a phone. What once was a rather functional product has become a product that expresses one's personality. Therefore, customers required their phone to be modern, easy to use, and of good quality. In the meantime, they did not want the phone to be expensive, as they would like to buy a new one every 2 years. These customer needs reflect increasing customer demands and increasing product complexity, requiring a far-reaching integration of the different knowledge domains of the actors from different disciplines during collaborative new product development (Co-NPD) (Garcia and Calantone, 2002, Swink, 2000 and Veryzer, 2005). Granstrand et al. (1992) found that the first generation of cellular phones in the 1980s only required electronic skills to be developed. However, in the 1990s, the development of the third generation of these phones demanded knowledge in physical ergonomics, electronic, mechanical, and computer engineering, and physiological and psychological aspects. In the last 10 years, the knowledge needed to develop today's mobile phones had increased yet again. Since the increased product complexity requires knowledge and skills from different fields, Co-NPD teams within companies have the responsibility to integrate these different knowledge bases (Edmondson and Nembhard, 2009). Knowledge integration appeared to be difficult for them, because actors often had different, interests and perspectives on the new to develop product (Bond and Ricci, 1992, Bucciarelli, 1996, Dougherty, 1992, Emmanuelides, 1993, Griffin and Hauser, 1996, Moenaert and Souder, 1990 and Moenaert et al., 2000). Furthermore, it was demanding for companies manage the actors towards thinking along the same line since actors faced difficulties in interpreting and understanding each other's knowledge (Adams et al., 1998, Bucciarelli, 2002, Dougherty, 1992, Griffin and Hauser, 1996, Hage et al., 2008 and Moenaert and Souder, 1990). The reason for this was that actors from different disciplines used different languages and different representations of the design artefact. Additionally, they often had different interests and responsibilities. Therefore, negotiations and trade-offs were required to make the actors’ efforts coherent (Bucciarelli, 1996). In the case study presented in this paper, Co-NPD is defined as: the process in which actors from different disciplines share their knowledge about both the development process and its content. They do that in order to create shared understanding on both aspects, to be able to integrate and explore their knowledge, and to achieve the larger common objective: the new product to be designed (Kleinsmann, 2006). Knowledge sharing is a critical intervening variable in organizational performance in Co-NPD (Mohrman et al., 2003), which shows the importance of an effective Co-NPD process. Research showed that companies face some major knowledge management challenges during Co-NPD since it thrives upon the exploration of knowledge under a high degree of uncertainty (Berends et al., 2007). Since actors do not have to become experts in each other's fields, they do not have to share all their knowledge. Yet, they have to be able to integrate their knowledge bases in a sensible manner. Therefore, Berends et al. (2007) claimed that, during Co-NPD, knowledge management should focus on knowledge integration instead of focusing on knowledge transfer. They also stated that the effectiveness of knowledge integration required a mutual understanding of the actor's contributions. This is in line with research on design communication, which finds that the quality of the Co-NPD project is dependent on the process of creating a shared understanding (Dong, 2005, Kahn, 1996 and Valkenburg, 2000). In addition, our interviews with product managers revealed that managers need more knowledge on how they could manage the creation of a shared understanding among actors from different disciplines, as the following quote from a product manager illustrates: “…There is no problem that cannot be solved technically. At least I have never experienced that personally. Finally, they always solve it. They use project management tools to map the problem and to find the solution. However, the real problem is the communication among the teams. Did they understand each other and are they critical enough to each other? … Dependent on their discipline, they have a feeling for each other's discipline, but the real details … It is complex to be able to know all parts about every discipline. As a Project Manager, you really have to be aware of this. That is also the reason why I need something to monitor that …” (Project Manager Philips). The study presented in this paper focuses on the process of creating a shared understanding in Co-NPD projects. The paper starts with a literature review about the role of shared understanding in Co-NPD projects. It continues with a description of the case study executed, followed by a description of the learning history method that was used as the research method. The paper concludes with its results, limitations, implications for future research and with a discussion of the results and implications for managerial practice.

The reason for executing this research was that earlier research showed that knowledge sharing and knowledge integration in Co-NPD is important since it has an influence on organizational performance (Berends et al., 2007, Jassawalla and Sashittal, 1998, Hoegl and Gemuenden, 2001, Hoegl et al., 2004, Kahn, 1996, Kahn, 2001, Mohrman et al., 2003 and Tessarolo, 2007). The literature also stated that the successfulness of knowledge integration is dependent of the ability of the actors to a shared understanding during Co-NPD, which was the focus of our study (Berends et al., 2007, Dong, 2005, Kahn, 1996 and Valkenburg, 2000). The results of this case study provides a deeper understanding of the role of shared understanding in Co-NPD projects in relation to the quality of the knowledge integration process. The holistic approach chosen allowed mapping the complexity knowledge integration in Co-NPD projects. In our study, we found factors that influenced the process of creating a shared understanding. These factors existed on three different organizational levels; the actor, project and company level. This means that the quality of knowledge integration is not only dependent on face-to-face communication, but also on project management and project organization. This case study was not the only study in which such a relationship has been identified (Adams et al., 1998, Dougherty, 1992 and Kleinsmann and Valkenburg, 2008). Dougherty (1992) recommended that firms should develop an organizational context that enables collective action. However, recent interviews with managers of Co-NPD have revealed that they still struggle with the organization of their development team and the embedding of the team in the organization. This makes it necessary to execute more research on knowledge integration and knowledge management systems by taking project management and project organization into account in addition to face-to-face communication. The results of this study also showed that there existed four different types of interfaces within the Co-NPD project studied. Within each type of interface, actors had to integrate different types of knowledge. Additionally, different factors for the creation of a shared understanding played a role. This shows the importance of taking the type of interface into account while studying knowledge integration in Co-NPD.