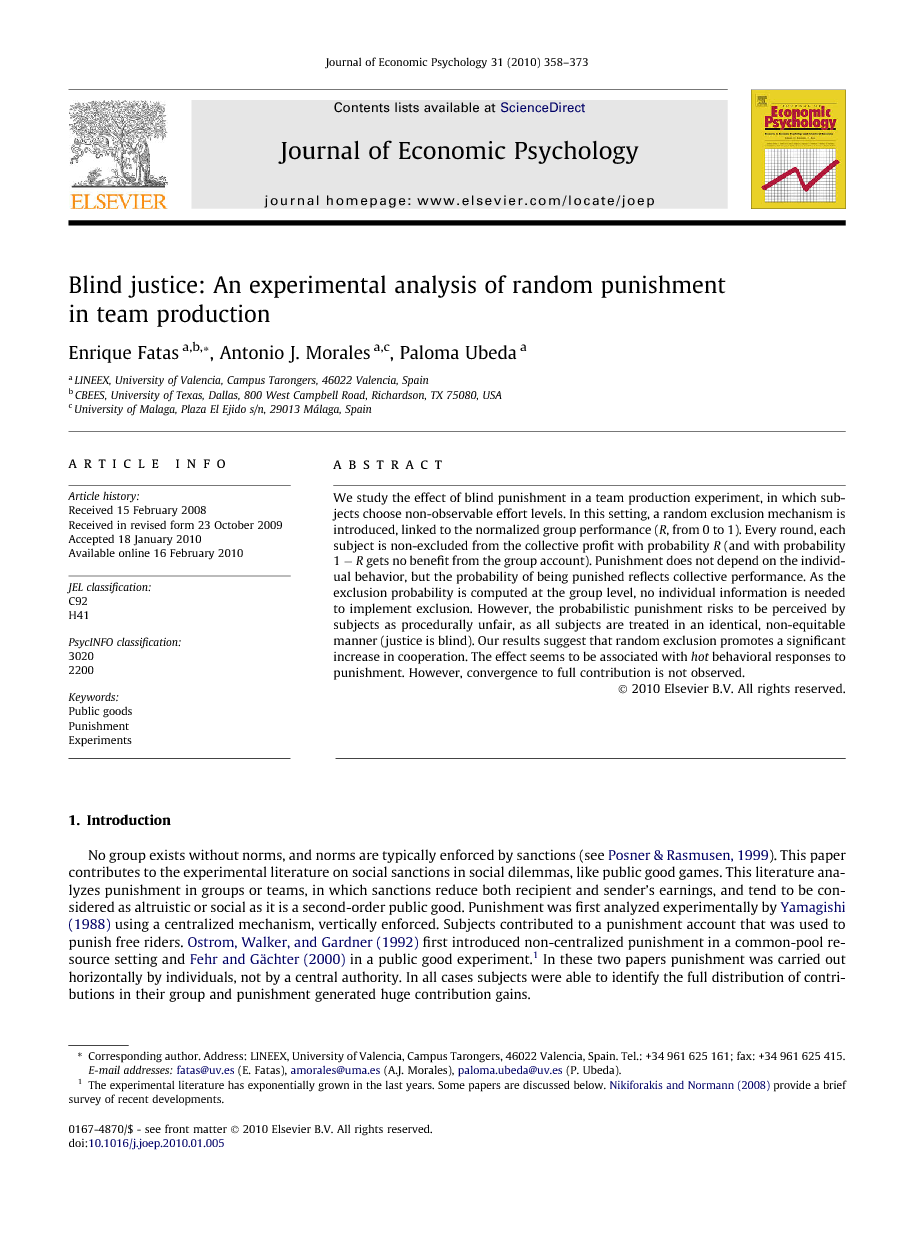 We study the effect of blind punishment in a team production experiment, in which subjects choose non-observable effort levels. In this setting, a random exclusion mechanism is introduced, linked to the normalized group performance (R, from 0 to 1). Every round, each subject is non-excluded from the collective profit with probability R (and with probability 1 − R gets no benefit from the group account). Punishment does not depend on the individual behavior, but the probability of being punished reflects collective performance. As the exclusion probability is computed at the group level, no individual information is needed to implement exclusion. However, the probabilistic punishment risks to be perceived by subjects as procedurally unfair, as all subjects are treated in an identical, non-equitable manner (justice is blind). Our results suggest that random exclusion promotes a significant increase in cooperation. The effect seems to be associated with hot behavioral responses to punishment. However, convergence to full contribution is not observed.

Groups sanction defectors. Sometimes they do it on an individual basis, making free riders to contribute, as Croson et al. (2006) shows. Sometimes individual information is not available but individuals still punish members depending on their collective performance. In this paper, we have analyzed the impact of random punishment in an experimental public good setting. Each round, a member of a group receives her share of the public good with a probability that matches the relative aggregate contribution to the public good. The main advantage of random punishment relative to other punishment schemes considered in the literature is that the information requirements are low: no information at individual level is required at all. Hence, a mechanism of this sort seems especially applicable in situations where only information on the group level is available. In our experiments, random sanctions do not eliminate the usual contribution decline, but contributions are significantly larger than in a baseline without any random sanction. Moreover, this result is independent of the way the excluded share is distributed (or not distributed at all) among group members. However, the minimal informational requirements impose a kind of a compromise between information (the input feeding random exclusion) and efficiency (the output) of the mechanism. In other words, we minimize the informational requirements at a cost. Free riders and co-operators within the same group will be treated equally, and punished with the same probability. It seems natural to consider that the blindness nature of the mechanism might jeopardize the basis of public good provision in games: conditional cooperation. A conditional co-operator contributes to the public good as long as she observes others contributing. In a public good game with horizontal punishment, conditional co-operators may punish free riders to eliminate the advantages of defection. In a public good game with blind sanctions, punishment is not driven by individual behaviour but by collective performance. So, random exclusions might lower contributions to the public good by cooperative subjects if they anticipate that both co-operators and free riders will be excluded from the public goods benefits with the same common probability. Our experimental results support the positive rationale of using this unfair rule, in the sense that even when top contributors negatively react to being unfairly treated, punishment generates significant contributions gains. We want to finish the paper with the following straightforward interpretation of our findings: blind justice is better than no justice at all. Conditional co-operators survive the perverse effects of random punishment and are able to generate large contribution gains, even when defectors do not take the hint when punished.