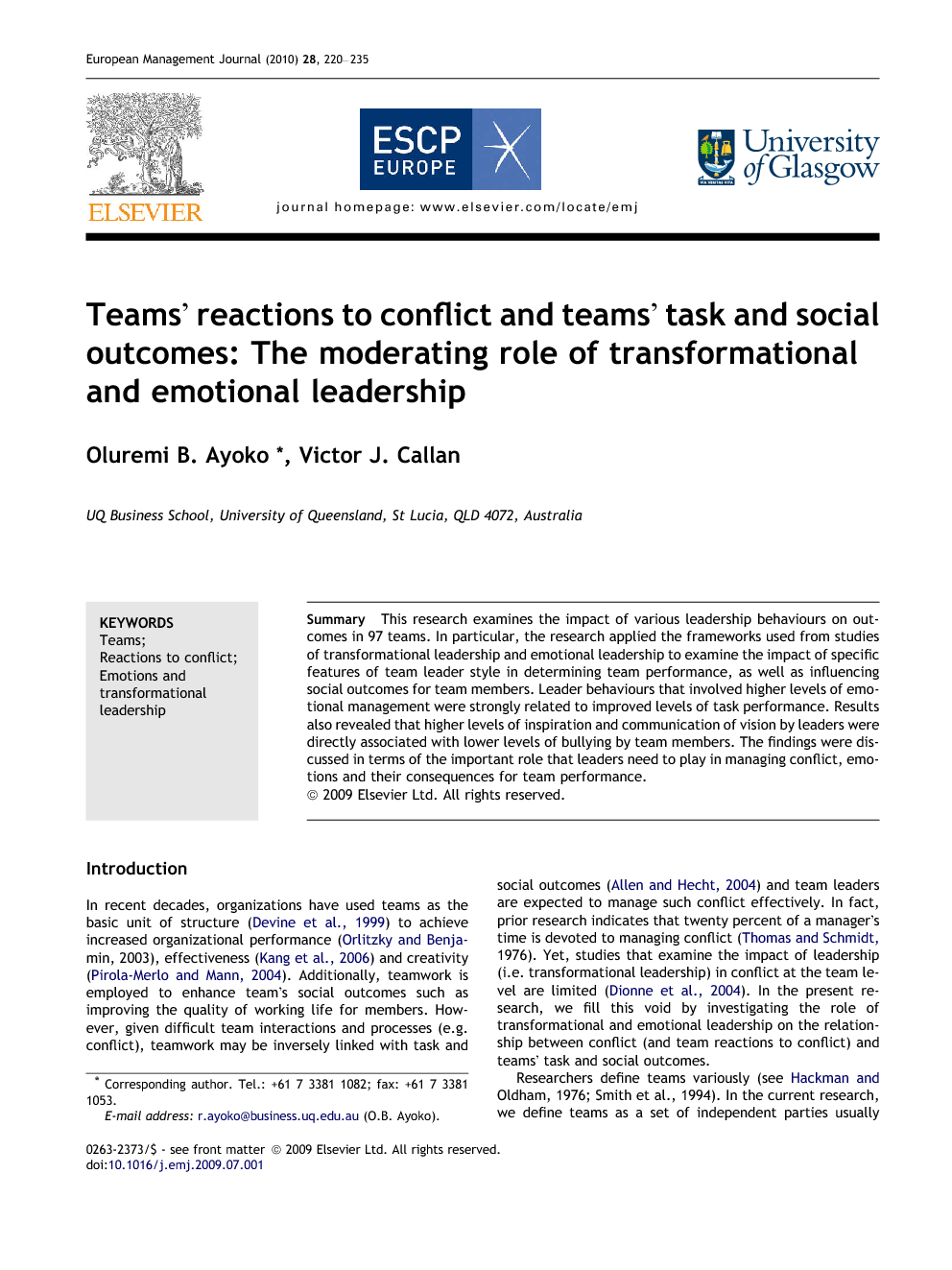 This research examines the impact of various leadership behaviours on outcomes in 97 teams. In particular, the research applied the frameworks used from studies of transformational leadership and emotional leadership to examine the impact of specific features of team leader style in determining team performance, as well as influencing social outcomes for team members. Leader behaviours that involved higher levels of emotional management were strongly related to improved levels of task performance. Results also revealed that higher levels of inspiration and communication of vision by leaders were directly associated with lower levels of bullying by team members. The findings were discussed in terms of the important role that leaders need to play in managing conflict, emotions and their consequences for team performance.

In recent decades, organizations have used teams as the basic unit of structure (Devine et al., 1999) to achieve increased organizational performance (Orlitzky and Benjamin, 2003), effectiveness (Kang et al., 2006) and creativity (Pirola-Merlo and Mann, 2004). Additionally, teamwork is employed to enhance team’s social outcomes such as improving the quality of working life for members. However, given difficult team interactions and processes (e.g. conflict), teamwork may be inversely linked with task and social outcomes (Allen and Hecht, 2004) and team leaders are expected to manage such conflict effectively. In fact, prior research indicates that twenty percent of a manager’s time is devoted to managing conflict (Thomas and Schmidt, 1976). Yet, studies that examine the impact of leadership (i.e. transformational leadership) in conflict at the team level are limited (Dionne et al., 2004). In the present research, we fill this void by investigating the role of transformational and emotional leadership on the relationship between conflict (and team reactions to conflict) and teams’ task and social outcomes. Researchers define teams variously (see Hackman and Oldham, 1976 and Smith et al., 1994). In the current research, we define teams as a set of independent parties usually small in number who recognize themselves as a team, have some degree of shared accountability (see also Cohen and Bailey, 1997) and who are collectively in charge of the achievement of one or several tasks as defined by the organization (Gladstein, 1984). Our research is focused on traditional teams where to a large extent, team members’ activities are directed by the leader (De Souza and Klein, 1995). Although research indicates that integrating individuals in team work is linked with increased innovation and employee satisfaction (Katzenbach and Smith, 2005), there is an overwhelming evidence to suggest that team work does not always bring success to organizations (Allen and Hecht, 2004, Rentsch et al., 1994 and Salas et al., 1995). For instance, prior research suggests that the need for team members to establish interdependency around achieving the task (Van der Vegt and Van de Vliert, 2002), often leads to team dynamics that have the potential to produce conflict (Jehn, 1997). Extant conflict research suggests that conflict may be a double–edged sword producing desirable outcomes such as innovation (Jehn, 1997), but also undesirable social outcomes such as animosity (Jehn, 1995). Furthermore, scholars report that conflict is beneficial for organizations and can assist in stimulating organizational performance (Tjosvold, 1991 and Jehn, 1994). Nevertheless, the results of a meta- analysis conducted by De Dreu and Weingart (2003) suggest that conflict has a damaging impact on team outcomes. Based on the above, we propose that two major reasons may be accountable for the mixed findings about the relationship between conflict and team outcomes. First, few studies have examined the separate impact of team members’ reactions to conflict. Second, we argue that the lack of attention to the role of some aspects of team leadership behaviours might further explain the consistent mixed outcomes for conflict in teams. Although, some studies have examined the impact of leaders’ behaviours and emotions on team outcomes, fewer studies have investigated the specific impact of leader behaviours (e.g. transformational and emotional) on team outcomes in the presence of conflict. Consequently, this current study focuses not only on team members’ reactions to conflict and on their impacts on team outcomes, but also on the moderating role of transformational and emotional leaders’ behavioural style upon team members’ reactions to conflict and team outcomes. Our study makes several contributions. First, the current study departs from the tradition of studying conflict and reactions to conflict in a composite form (see Jehn, 1995). Specifically, we build on the work of Jehn, 1995, Jehn, 1997, Pelled, 1996 and Jehn and Chatman, 2000 to test the impact of team members’ reactions to conflict on various team outcomes. Secondly, we focus on teams’ social outcome such as bullying (Einarsen, 1999) that has the potential to increase stress and reduce team members’ well-being (Sheehan, 1999). Thirdly, given the work of George, 2000, Druskat and Wolff, 2001 and McColl-Kennedy and Anderson, 2002, we extend the leadership literature by exploring more fully how transformational and emotional styles of leadership moderate the relationship between team members’ reactions to conflict and teams’ outcomes. To achieve this, we developed and tested a model that specifies links between team members’ reactions to conflict, transformational and emotional leadership behaviours and teams’ task and social outcomes.