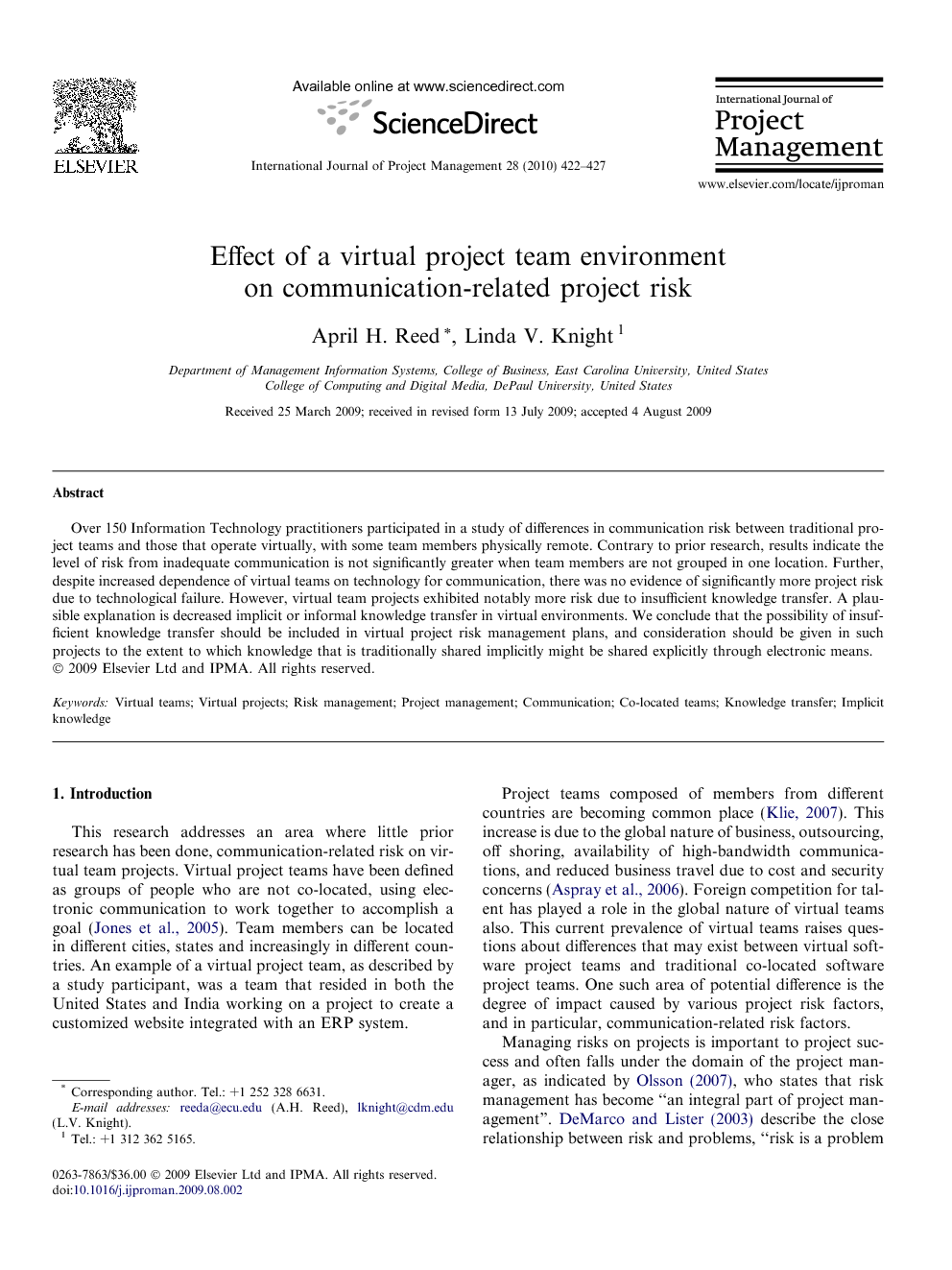 Over 150 Information Technology practitioners participated in a study of differences in communication risk between traditional project teams and those that operate virtually, with some team members physically remote. Contrary to prior research, results indicate the level of risk from inadequate communication is not significantly greater when team members are not grouped in one location. Further, despite increased dependence of virtual teams on technology for communication, there was no evidence of significantly more project risk due to technological failure. However, virtual team projects exhibited notably more risk due to insufficient knowledge transfer. A plausible explanation is decreased implicit or informal knowledge transfer in virtual environments. We conclude that the possibility of insufficient knowledge transfer should be included in virtual project risk management plans, and consideration should be given in such projects to the extent to which knowledge that is traditionally shared implicitly might be shared explicitly through electronic means.

This research addresses an area where little prior research has been done, communication-related risk on virtual team projects. Virtual project teams have been defined as groups of people who are not co-located, using electronic communication to work together to accomplish a goal (Jones et al., 2005). Team members can be located in different cities, states and increasingly in different countries. An example of a virtual project team, as described by a study participant, was a team that resided in both the United States and India working on a project to create a customized website integrated with an ERP system. Project teams composed of members from different countries are becoming common place (Klie, 2007). This increase is due to the global nature of business, outsourcing, off shoring, availability of high-bandwidth communications, and reduced business travel due to cost and security concerns (Aspray et al., 2006). Foreign competition for talent has played a role in the global nature of virtual teams also. This current prevalence of virtual teams raises questions about differences that may exist between virtual software project teams and traditional co-located software project teams. One such area of potential difference is the degree of impact caused by various project risk factors, and in particular, communication-related risk factors. Managing risks on projects is important to project success and often falls under the domain of the project manager, as indicated by Olsson (2007), who states that risk management has become “an integral part of project management”. DeMarco and Lister (2003) describe the close relationship between risk and problems, “risk is a problem that has yet to occur, and a problem is a risk that has already materialized” (DeMarco and Lister, 2003). This relationship between a risk and a problem suggests a link between project risk and project failure. Unmitigated risks that escalate into problems can result in effects ranging from unmet user requirements and performance issues to loss of dollars and lost opportunities, not to mention complete project failure (Boehm, 1991 and Wallace and Keil, 2004). The negative impact of software project risk has been measured for years by the Standish Group. Their CHAOS survey and report has shown overall from 1996 to 2006 the percentage of challenged and cancelled projects has decreased slightly, by between 3% and 13% while the percentage of successful projects overall increased by 1% to as much as 6% (Standish Group, 1999, 2001, 2004, 2006). These numbers support perceptions of the continuing existence of project problems and failures, whose general prevention is the goal of project management. Identification and knowledge of project risk factors has been cited as a method of decreasing the severity and the impact of risk (Boehm, 1991). Consequently, multiple researchers in project management created lists of top project risks on software projects (Boehm, 1991; Barki et al., 1993, Keil, 1998 and Wallace and Keil, 2004). One of the original lists was created by Boehm (1991) and consisted of the “top ten software risk items”: personnel shortfalls, unrealistic schedules and budgets, developing the wrong functions and properties, developing the wrong user interface, gold-plating, continuing stream of requirements changes, shortfalls in externally furnished components, shortfalls in externally performed tasks, real-time performance shortfalls, and straining computer-science capabilities. By and large, these prior project risk studies were conducted at a time when projects involved traditional, co-located teams. By comparison, little is known about risks on virtual projects. This paper investigates the risk management aspects of project management by exploring the differences on virtual versus co-located software project teams for some specific communication-related risks, an area of risk identified by Wallace (1999). We report here on the communication risk portion of a larger research study. The main purpose of this manuscript is to address the following research question: What, if any, are the significant differences in communication-related risk between virtual and co-located Information Technology projects? Three specific project risk factors relating to communication were distilled from past research, along with a combination of focus groups and pilot studies. Note that the focus group and pilot studies are described later in the methodology section.

We have demonstrated that there is a significant communication-related difference between projects employing traditional co-located teams and those using virtual teams, but that differences do not appear in all of the areas that have been suggested by prior research. Contrary to much conventional wisdom, there were no significant differences between co-located and virtual project teams on two communication-related risk factors: inadequate communication and technological problems hindering communication. Inadequate communication appears to be an important risk on projects of both types, while technological problems hindering communication does not appear to be a key risk for either type of project. The level playing field with respect to these two risks may in part reflect changes that have occurred over the years in the way projects are managed, including new tools and methods of communication and improvements in the technical aspects of electronic communication. Perhaps digital communications mitigate these communication-related risks similarly on both types of projects. Insufficient knowledge transfer was found to have a significantly stronger negative impact on virtual software projects than on co-located software projects. A plausible explanation is an inability to transfer certain types of implicit knowledge or expertise successfully via electronic communication methods or without face-to-face communication. Knowledge transfer problems are exacerbated by the failure of the virtual environment to provide substantial opportunities to provide for the casual exchange of knowledge. We need further research on the specifics of differences in knowledge transfer between virtual and co-located project teams, as well as exploration of methods for enhancing implicit knowledge sharing on virtual projects. Additionally, future research is needed to investigate how levels of project risk vary with specific features of the knowledge being shared and its transfer process. While such research is in progress, managers of virtual projects should include the possibility of insufficient knowledge transfer in their risk management plans, and consider mitigating that risk to the extent possible by arranging to share knowledge electronically that would otherwise have been shared only implicitly.