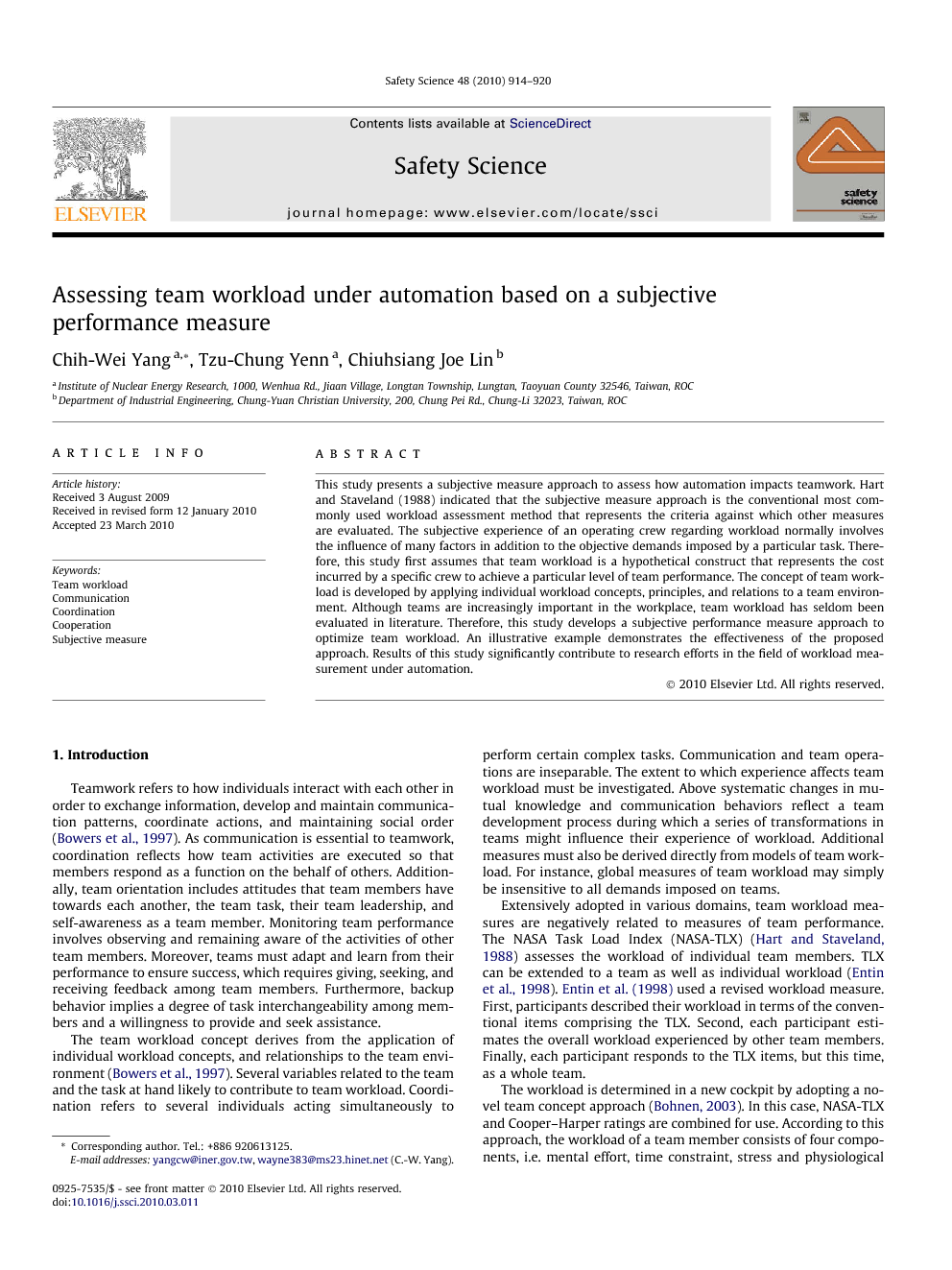 This study presents a subjective measure approach to assess how automation impacts teamwork. Hart and Staveland (1988) indicated that the subjective measure approach is the conventional most commonly used workload assessment method that represents the criteria against which other measures are evaluated. The subjective experience of an operating crew regarding workload normally involves the influence of many factors in addition to the objective demands imposed by a particular task. Therefore, this study first assumes that team workload is a hypothetical construct that represents the cost incurred by a specific crew to achieve a particular level of team performance. The concept of team workload is developed by applying individual workload concepts, principles, and relations to a team environment. Although teams are increasingly important in the workplace, team workload has seldom been evaluated in literature. Therefore, this study develops a subjective performance measure approach to optimize team workload. An illustrative example demonstrates the effectiveness of the proposed approach. Results of this study significantly contribute to research efforts in the field of workload measurement under automation.

This study has developed a refined subjective measure, C3 + C2 approach, to assess how automation impacts teamwork. An illustrative example demonstrates the effectiveness of the proposed approach. Analytical results indicate that the proposed approach can evaluate team workload concisely. This approach emphasizes two dimensions, teamwork activities and HIP functions. Workload is essential in control room design (Sebok, 2000). The advanced human–system interface (HSI) appears to maintain an appropriate team workload. However, a higher workload is found in the advanced plant condition, and does not support vendor assumptions that computerized interfaces and plant design features automatically reduce the workload of an operating crew. Consideration should be made of workload before staffing levels are reduced in advanced nuclear power plant control rooms. Like NASA-TLX, the proposed “C3 + C2” approach is a subjective, post hoc workload assessment tool. These two approaches both ask users to perform subjective workload assessments on operator(s) working with various human–machine systems. NASA-TLX is a multi-dimensional rating procedure that derives an individual-centered workload score based on a weighted average of ratings on six subscales, includes mental demands, physical demands, temporal demands, own performance, effort and frustration. Oppositely, the proposed “C3 + C2” approach provides a diverse view of team workload and a systematic questionnaire approach (unlike TPAB, an experimental approach) in the operating conditions of an advanced nuclear power plant control room based on a weighted average of ratings on communication, coordination, cooperation plus command and control. Analytical results indicate that shift supervisor and reactor operator differ in team workload. Moreover, the sources of these differences are analyzed in detail. A future study should investigate anticipated changes to the HSI in the control room and rearrangement of the staffing level.