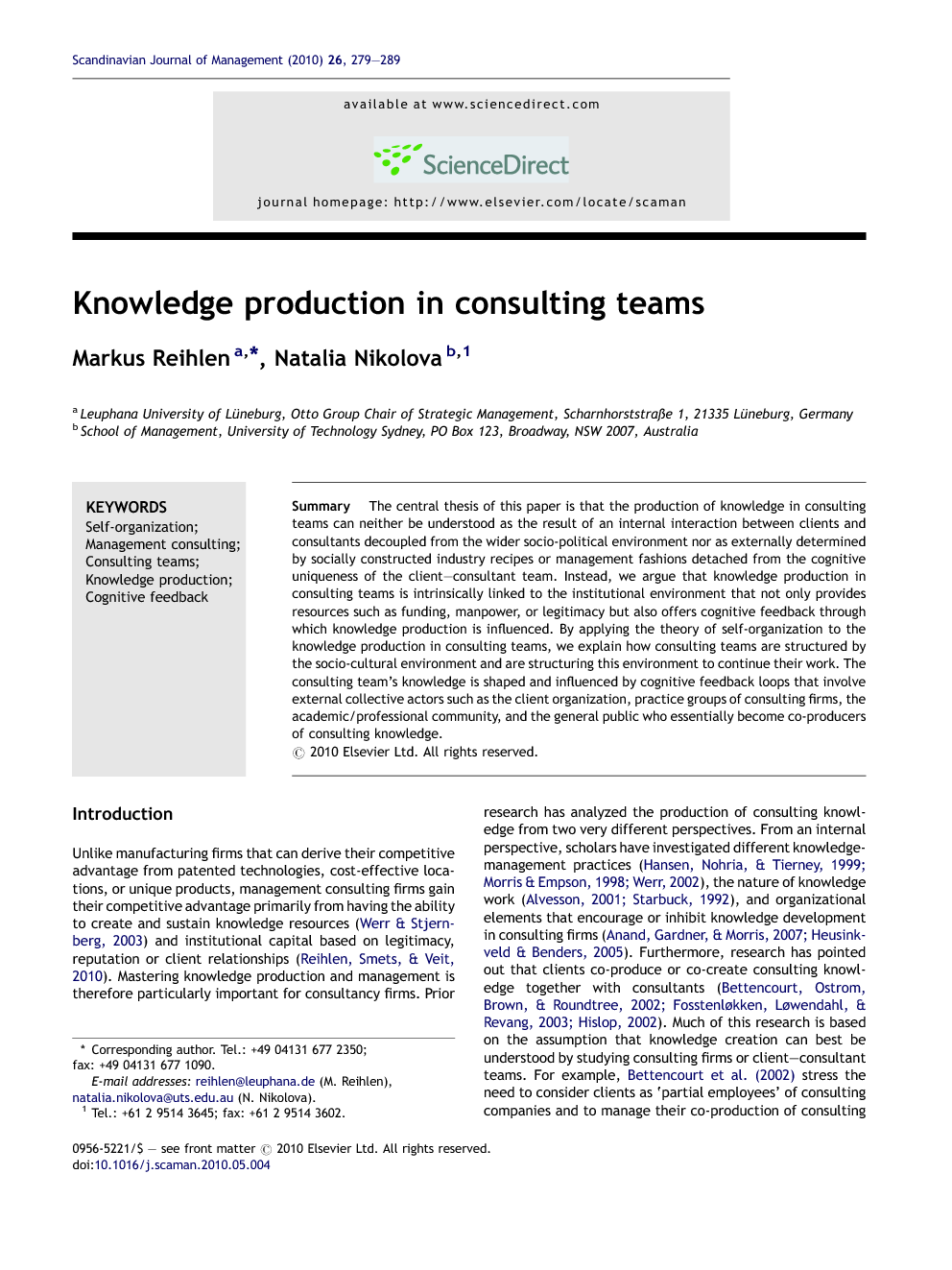 The central thesis of this paper is that consulting knowledge is an outcome of endless processes of influence and mutual adjustment between professional teams and multiple networks of collective actors in which they are embedded. By applying the theory of self-organization to knowledge production in client–consultant teams and making use of existing empirical research on consulting, we reveal how clients, consultants and external actors interact and shape each other's cognitive orientations and consequently, the knowledge production within client–consultant teams. We show that this influence takes complex forms and pathways resulting in a view of knowledge production in client–consultant teams as a circular, multidimensional, and interactive social process. One contribution of this paper is that it further elaborates on the active roles that clients play in the process of consulting knowledge production, which has been outlined in recent research (e.g., Alvesson et al., 2009, Sturdy et al., 2009a and Sturdy et al., 2009b). We argue that clients influence knowledge production within consulting teams on a number of levels: (1) clients as team members are directly involved in problem-solving and knowledge development (see also Fosstenløkken et al., 2003 and Hislop, 2002); (2) external, non-involved clients influence the direction of problem-solving and knowledge development through their support or resistance to particular ideas and solutions developed by client–consultant teams as well through their influence through the provision of financial resources and the selection of team members; (3) through their support for or resistance to consulting concepts, clients as members of industry groups influence the generation and dissemination of consulting fads. Furthermore, this paper sheds more light on the mechanisms by which other external collective actors, such as practice groups, the media, business schools, and the general public influence consulting and consulting knowledge by outlining the nature of the cognitive feedback loops that bind consulting teams to their environment. In this way, we contribute to a better understanding of the micro processes of knowledge production and dissemination and their interrelation with the macro processes of creation and institutionalization of new management concepts and models, an issue which is still under-researched in the existing literature. Future research may benefit from extending our work theoretically and empirically. On a more fundamental level, we suggest that knowledge should neither be investigated by an individualist (e.g., Felin & Hesterly, 2007) nor by a collectivist tradition (e.g., Dougherty, 1992) since neither of them recognizes the co-evolutionary and interactionist nature of knowledge creation. Quite contrary to both traditions, we see more promising work explicitly focusing on the interaction between socio-cultural and individual forces working together to create knowledge (Bandura, 1986, Bunge, 1996 and Ringberg and Reihlen, 2008). That is, the dynamic processes involved in knowledge production can only be fully appreciated if researchers take into account both cognitive dispositions of clients/consultants (individualism) and social feedback mechanisms (collectivism). Knowledge creation is thus predicated on influences from both the socio-cultural environment and the intentional mind. Furthermore, what is of particular interest is to explore how the professional team and external actors react to each other's interpretations and actions fuelling an endless process of instability and mutual adjustment (Nicolini, 2009). This process is by no means free of political agendas and dominance. Rather, the negotiation processes taking place between professional teams and their environment influence, and are influenced by, relations of power and dominance. This interaction between the cognitive and political dimensions of knowledge production is still poorly understood. On a more specific level, the presumed interactions between the client–consultant team and external collective actors involved in the production of consulting knowledge should be studied empirically. One route to accomplish this is to conduct in-depth case studies (Eisenhardt, 1989 and Yin, 2003) with different actors in the consulting industry, through which central mechanisms of mutual influence and interaction can be revealed and their influence assessed. Such studies would contribute to developing empirically grounded theories (Glaser, 1992 and Strauss and Corbin, 1998) on the social embeddedness of the production of consulting knowledge. Furthermore, empirical research is needed to access how client–consultant teams as self-organizing systems process external cognitive feedback and influences in a non-deterministic way and what are the results of different ‘paths of influence’. In other words, we need to learn more about the path-dependency of the social production of knowledge. Another avenue for future research would be to empirically study socio-cognitive interactions within other types of professional teams, particularly those that are regulated through professional associations, i.e. accounting, architecture, engineering and law. It is important to find out to what extent cognitive feedback loops differ between different professions in order to better understand differences and similarities in the knowledge development processes of these professional services. As Malhotra and Morris (2009, p. 896) point out, ‘systematic inter-professional comparisons of firms are non-existent.’ We regard our contribution in this paper as merely a starting point for research in these directions.