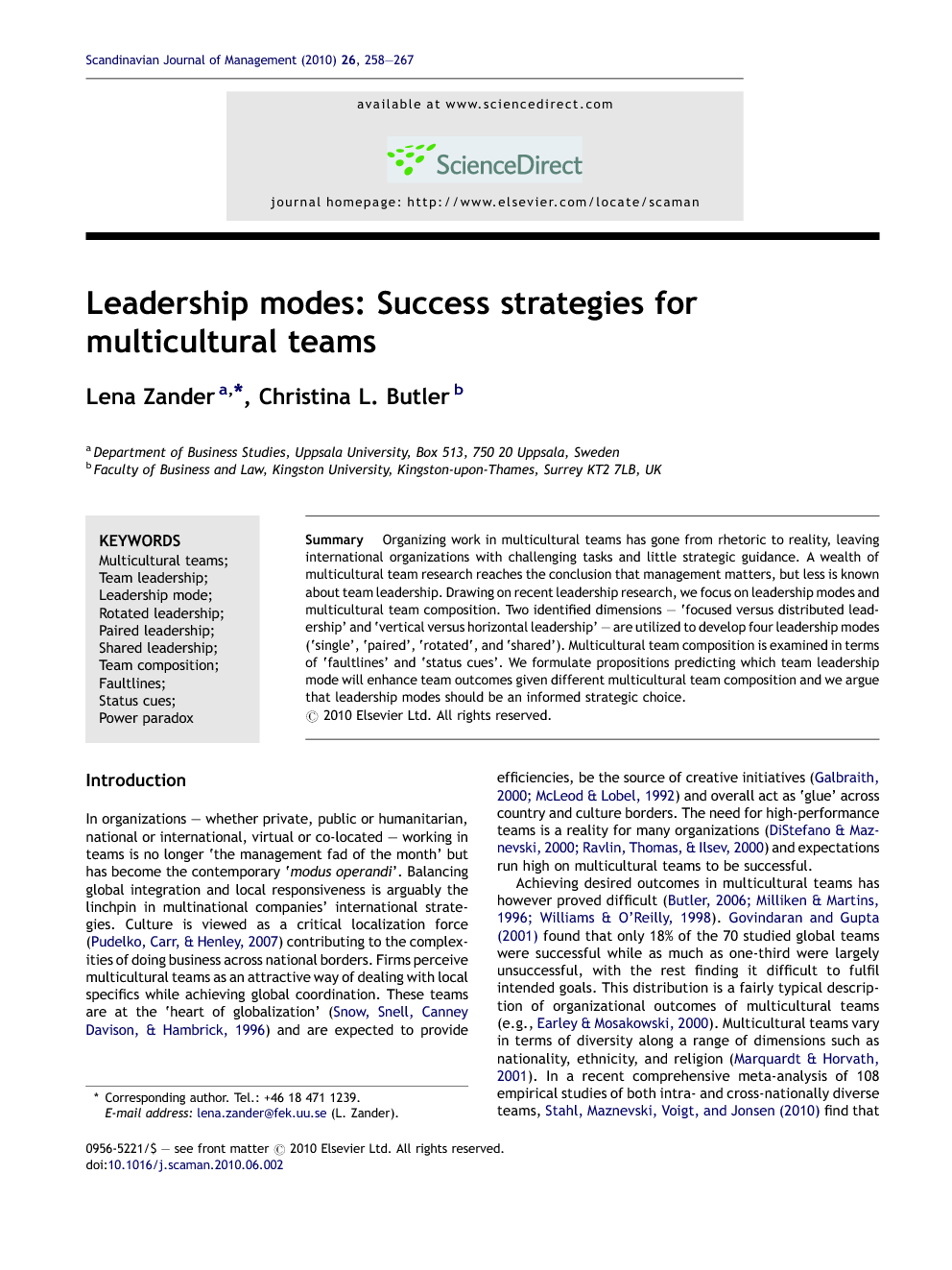 In organizations – whether private, public or humanitarian, national or international, virtual or co-located – working in teams is no longer ‘the management fad of the month’ but has become the contemporary ‘modus operandi’. Balancing global integration and local responsiveness is arguably the linchpin in multinational companies’ international strategies. Culture is viewed as a critical localization force (Pudelko, Carr, & Henley, 2007) contributing to the complexities of doing business across national borders. Firms perceive multicultural teams as an attractive way of dealing with local specifics while achieving global coordination. These teams are at the ‘heart of globalization’ (Snow, Snell, Canney Davison, & Hambrick, 1996) and are expected to provide efficiencies, be the source of creative initiatives ( Galbraith, 2000 and McLeod and Lobel, 1992) and overall act as ‘glue’ across country and culture borders. The need for high-performance teams is a reality for many organizations ( DiStefano and Maznevski, 2000 and Ravlin et al., 2000) and expectations run high on multicultural teams to be successful. Achieving desired outcomes in multicultural teams has however proved difficult (Butler, 2006, Milliken and Martins, 1996 and Williams and O’Reilly, 1998). Govindaran and Gupta (2001) found that only 18% of the 70 studied global teams were successful while as much as one-third were largely unsuccessful, with the rest finding it difficult to fulfil intended goals. This distribution is a fairly typical description of organizational outcomes of multicultural teams (e.g., Earley & Mosakowski, 2000). Multicultural teams vary in terms of diversity along a range of dimensions such as nationality, ethnicity, and religion (Marquardt & Horvath, 2001). In a recent comprehensive meta-analysis of 108 empirical studies of both intra- and cross-nationally diverse teams, Stahl, Maznevski, Voigt, and Jonsen (2010) find that cultural diversity leads to process losses through decreased social integration and increased conflict but also to process gains from increased team creativity and member satisfaction. With this article Stahl et al. (2010) convincingly demonstrate the commonly professed resolution that process management matters (see, e.g., DiStefano & Maznevski, 2000). Management obviously matters but yet multicultural team research, in stark contrast to single-culture team research, is curiously silent on the topic of team leadership. Burke et al. (2006) alert us to the need for specific ‘team leadership’ research, arguing that traditional leadership theories are often applied in team research ignoring the complexity and dynamics of managing a team instead of individuals. Such concern is of particular relevance for multicultural teams as culture increases the complexity by kind, not just in degree, resulting amongst other in different interpersonal dynamics. Inspired by recent work to focus on leadership rather than leaders (Crevani et al., 2009 and Morgeson et al., 2010), we identify and outline leadership modes. We also draw on leadership research suggesting that leadership is becoming a shared phenomenon in organizations (Avolio, Walumbwa, & Weber, 2009; Carson, Tesluk, & Marrone, 2007). By using two leadership dimensions – ‘focused versus distributed’ leadership activities (specifically practices and functions) and ‘vertical versus horizontal’ leadership authority (specifically decision-making authority) based on work by Gibb (1954), Pearce and Sims (2002), and Carson, Tesluk, and Marrone (2007) – we identify and outline four leadership modes. We specifically examine (1) single leadership, (2) paired leadership, (3) rotated leadership, and (4) shared leadership as possible team leadership modes for multicultural teams. Instead of contrasting one extreme of the archetypical hierarchical authoritarian individual-based leadership with the archetypical truly contemporary collective leadership (where all team members are involved) and pushing for a one-best-leadership (as is common in the leadership discourse), we advocate for a contingency perspective. Prior research has firmly established that team composition has an impact on team performance (Morgeson et al., 2010) and that team composition is often a given rather than a choice. Managing the ‘cultural composition’ of multicultural teams, as Butler (2006) argues, is critical to achieve positive team outcomes. Subsequently, Butler and Zander (2008) propose ‘faultlines’ (Lau & Murnighan, 1998) and ‘status cues’ (Berger, Webster, Ridgeway, & Rosenholtz, 1986) as two powerful theoretical approaches for understanding how team compositions underlies creativity in multicultural teams. In this conceptual article, we further these ideas and use faultlines and status cues to provide the theoretical underpinnings for our proposed choice of leadership modes. We draw on conceptual developments and empirical findings in both the leadership and team literatures to develop a model and propositions around the relationship between multicultural team composition and effective leadership modes. Our contribution is to propose specific leadership modes that are geared to bringing out the best in multicultural teams. They precede, facilitate, and at best lessen the burden of management by making the leadership mode (single, paired, rotated, and shared) based on the team composition (characterized by faultlines and status cues) a strategic choice at the outset. It is our contention that the team process will start off more smoothly and is more likely to facilitate team success when considering team leadership as a strategic choice. The article is structured as follows: We will begin with discussing team leadership before identifying and outlining the four leadership modes (single, paired, rotated, and shared) by drawing on extant team research. We will then turn to faultlines and status cues when discussing multicultural team diversity and configuration. Subsequently, we develop propositions to determine which leadership modes could be more efficient for a given team composition and thus be predicted to lead to successful team outcomes. This is followed by a discussion about the model and its limitations before concluding the article. Team leadership

By drawing on the recent leadership and team literature, we have turned our attention to the function of leadership, not the properties of leaders, when developing our four team leadership modes (single, paired, rotated, and shared). To avoid falling into the ‘culture-free trap’ and assuming universal applicability of leadership research on teams, we have used two theoretical approaches (faultlines and status cues) for mapping cultural team composition in a generalized way. As a first attempt to come to grips with the complexity posed by multicultural team composition, we propose that an informed strategic choice of team leadership mode should be contingent on team composition. The team leadership modes differ based on focused and distributed leadership in terms of activities (e.g., functions and practices) as well as on vertical and horizontal allocation of the decision-making authority. For multinational companies to effectively tackle multicultural team leadership challenges, management matters. Just as teams are often ‘composed’ based on expertise (and possibly on other communication, fairness or political considerations), so too are the leadership possibilities restricted to individual managers already in relevant positions or available for selection. At the same time, we believe that informed team leadership includes a strategic choice of leadership mode. It is our contention that the probability of success increases when the multicultural team composition with respect to faultlines and status cues is taken into account. Our novel contribution to international management in general, and multicultural team research in particular, is to propose four leadership modes to choose between and formulate propositions for when to choose which mode. We offer alternatives for managing the challenges associated with multicultural team leadership, such as the power paradox, leveraging creativity and innovativeness in situations with polarized power play, as well as bringing out the best in teams characterized by hierarchical patterns. Our propositions for the choice of team leadership mode can be helpful both when deciding on the leadership of planned long-term project teams as well as of so-called ‘Cheetah teams’ (Engwall & Svensson, 2004). The Cheetah teams are an extreme form of temporary organization, often launched ad hoc to deal with critical problems. By examining team composition in terms of faultlines and status cues, a team leadership mode with a high probability of succeeding can be chosen. Apart from high-performance demands placed on teams in general, the fact that Cheetah teams are put together to deal with unanticipated and urgent problems increases the need for better leadership. In these cases, the chosen team leadership mode must also work well immediately, as there is less time for learning. In the face of limited empirical evidence of positive outcomes (with most results pointing towards problems and unrealized objectives) in planned multicultural teams with varying complex and interdependent tasks at hand, the choice of team leadership mode becomes a high priority. We are aware of how critical leaders at all levels are for successful strategy implementation (O’Reilly, Caldwell, Chatman, Lapiz, & Self, 2010). We propose that deciding on the appropriate team leadership mode to start the team process on a positive note and invoke virtuous circles is a vital strategic choice. In sum, we have tried to outline the relationship between multicultural team composition and team leadership modes with the aim of bringing out the best in multicultural teams and increase the potential for successful and/or creative organizational outcomes. Teams are frequently formed to address multifaceted issues, solve complex problems, and generate creative solutions as members are generally chosen based on their specific skills and competencies. Therefore, the fact that highly competent teams are in search of the proper leadership rather than the other way around should guide successful strategies in multinational companies.