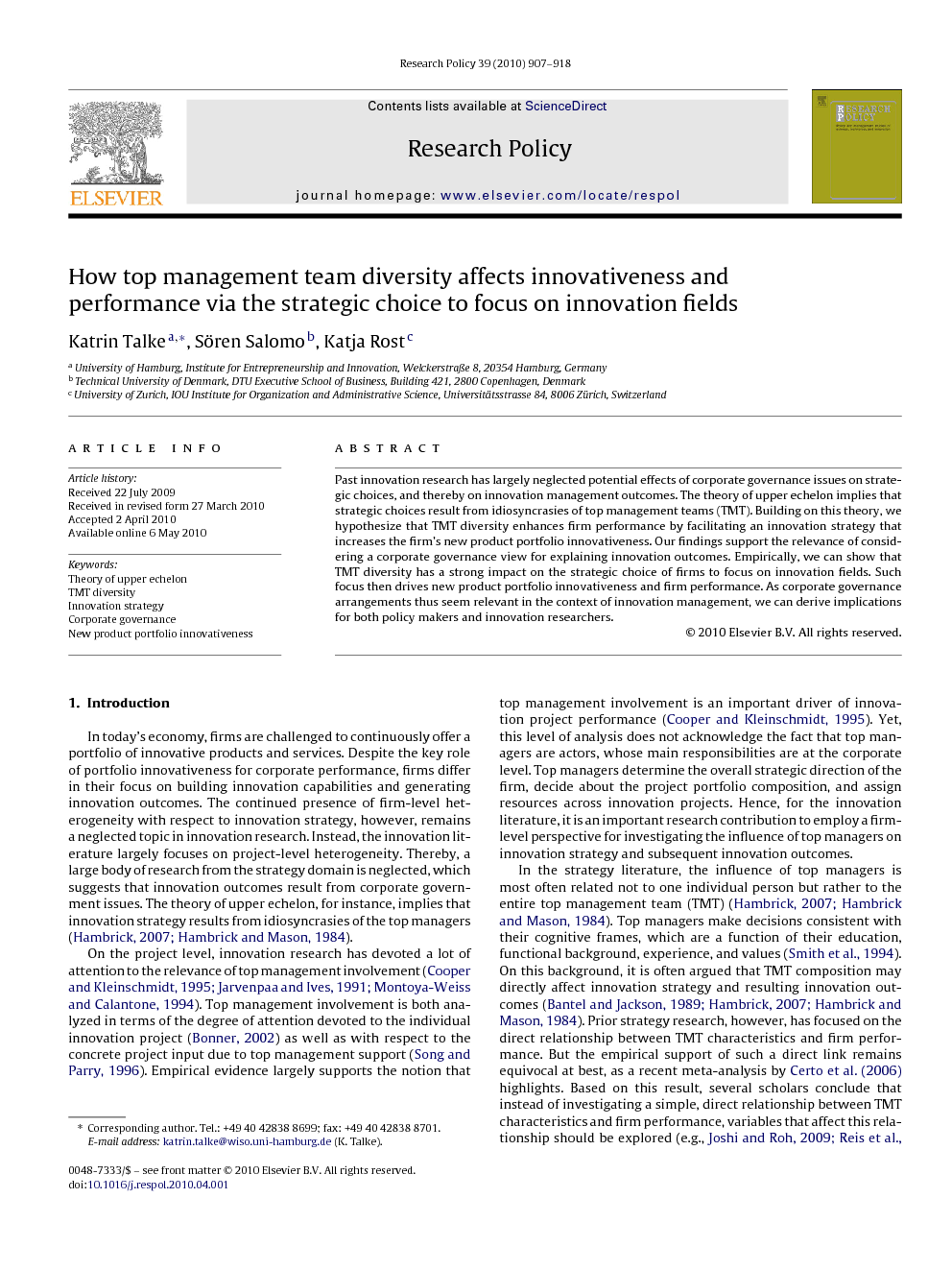 Past innovation research has largely neglected potential effects of corporate governance issues on strategic choices, and thereby on innovation management outcomes. The theory of upper echelon implies that strategic choices result from idiosyncrasies of top management teams (TMT). Building on this theory, we hypothesize that TMT diversity enhances firm performance by facilitating an innovation strategy that increases the firm's new product portfolio innovativeness. Our findings support the relevance of considering a corporate governance view for explaining innovation outcomes. Empirically, we can show that TMT diversity has a strong impact on the strategic choice of firms to focus on innovation fields. Such focus then drives new product portfolio innovativeness and firm performance. As corporate governance arrangements thus seem relevant in the context of innovation management, we can derive implications for both policy makers and innovation researchers.

In today's economy, firms are challenged to continuously offer a portfolio of innovative products and services. Despite the key role of portfolio innovativeness for corporate performance, firms differ in their focus on building innovation capabilities and generating innovation outcomes. The continued presence of firm-level heterogeneity with respect to innovation strategy, however, remains a neglected topic in innovation research. Instead, the innovation literature largely focuses on project-level heterogeneity. Thereby, a large body of research from the strategy domain is neglected, which suggests that innovation outcomes result from corporate government issues. The theory of upper echelon, for instance, implies that innovation strategy results from idiosyncrasies of the top managers (Hambrick, 2007 and Hambrick and Mason, 1984). On the project level, innovation research has devoted a lot of attention to the relevance of top management involvement (Cooper and Kleinschmidt, 1995, Jarvenpaa and Ives, 1991 and Montoya-Weiss and Calantone, 1994). Top management involvement is both analyzed in terms of the degree of attention devoted to the individual innovation project (Bonner, 2002) as well as with respect to the concrete project input due to top management support (Song and Parry, 1996). Empirical evidence largely supports the notion that top management involvement is an important driver of innovation project performance (Cooper and Kleinschmidt, 1995). Yet, this level of analysis does not acknowledge the fact that top managers are actors, whose main responsibilities are at the corporate level. Top managers determine the overall strategic direction of the firm, decide about the project portfolio composition, and assign resources across innovation projects. Hence, for the innovation literature, it is an important research contribution to employ a firm-level perspective for investigating the influence of top managers on innovation strategy and subsequent innovation outcomes. In the strategy literature, the influence of top managers is most often related not to one individual person but rather to the entire top management team (TMT) (Hambrick, 2007 and Hambrick and Mason, 1984). Top managers make decisions consistent with their cognitive frames, which are a function of their education, functional background, experience, and values (Smith et al., 1994). On this background, it is often argued that TMT composition may directly affect innovation strategy and resulting innovation outcomes (Bantel and Jackson, 1989, Hambrick, 2007 and Hambrick and Mason, 1984). Prior strategy research, however, has focused on the direct relationship between TMT characteristics and firm performance. But the empirical support of such a direct link remains equivocal at best, as a recent meta-analysis by Certo et al. (2006) highlights. Based on this result, several scholars conclude that instead of investigating a simple, direct relationship between TMT characteristics and firm performance, variables that affect this relationship should be explored (e.g., Joshi and Roh, 2009, Reis et al., 2007 and van Knippenberg and Schippers, 2007). As of yet, however, little research attention has been devoted to such mediating processes (Hambrick, 2007), and those scholars who have (e.g., Knight et al., 1999, Li and Hambrick, 2005, Simons et al., 1999 and Smith et al., 1994) were mainly interested in the influence of TMT diversity on the TMT's social behavior. Hence, empirical evidence for mediated relationships is still rare, particularly when it comes to mediated relationships that consider aspects of innovation strategy and innovation outcomes. Improving the understanding of the role of these aspects in such mediated relationships would thus be a valuable contribution for the innovation literature. From a project perspective, innovation research may provide insight from a related topic. For cross-functional teams, vast evidence implies mainly positive effects on innovation outcome measures, like product innovativeness and product performance (Brown and Eisenhardt, 1995, Hoegl and Proserpio, 2004, Ittner and Larcker, 1997, Keller, 2001 and Lovelace et al., 2001). It is found that diversity among innovation team members can have a positive impact on creativity, task reflexivity, and information sharing, which then leads to superior innovation outcomes (e.g., Dahlin et al., 2005). Still, the question whether these diversity findings can be transferred to TMTs, and hence, to the firm level, remains to be answered. Answering this question is of particular relevance as in many firms TMT diversity is rather limited (Daily et al., 2003 and Gallen, 2009). If empirical evidence for the positive effect of team diversity for innovation outcome would also materialize for TMTs, this could have major implications for designing effective TMTs. Building on these research gaps, this study contributes to the literature by putting the corporate governance view on innovation management to an empirical test. For firms with a dominant or single-product business, we investigate whether TMT diversity enhances firm performance by facilitating an innovation strategy that increases the firm's new product portfolio innovativeness. Thereby, we contribute to the innovation literature by employing a firm-level perspective for investigating the influence of team diversity on innovation strategy and subsequent innovation outcomes. In addition, also the strategy literature can benefit from our research. By investigating the mediating role of a firm's innovation strategy and its new product portfolio innovativeness, we bridge the gap between TMT characteristics and firm performance. The paper proceeds as follows: in the following section, we review the strategy literature, which suggests that TMT composition affects strategic choices and performance. We then discuss the relevance of considering the influence of TMT composition on innovation strategy, new product portfolio innovativeness, and firm performance and develop hypotheses for both direct and indirect relationships. Following the empirical assessment of these hypotheses, we discuss our findings and derive implications for both policy makers and innovation researchers.