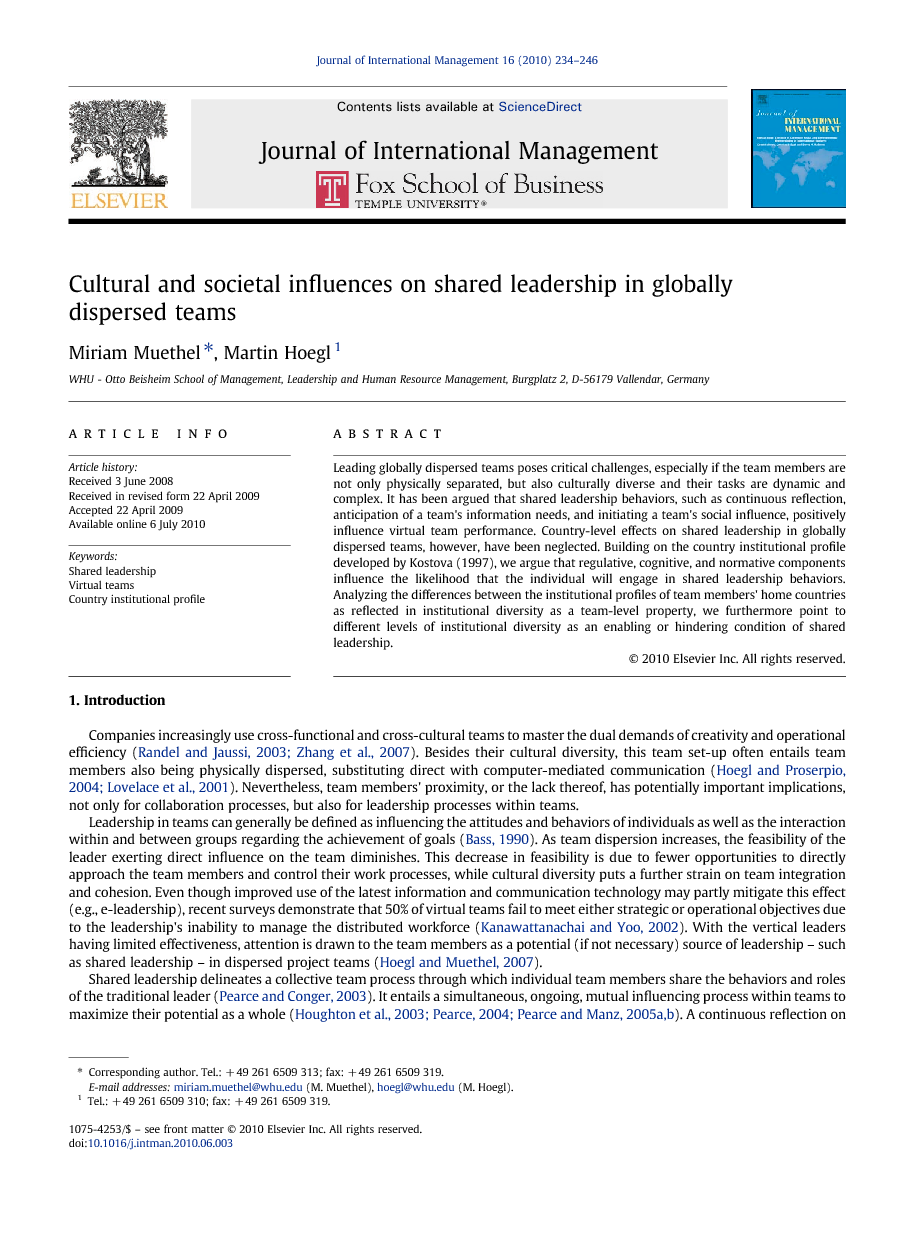 Leading globally dispersed teams poses critical challenges, especially if the team members are not only physically separated, but also culturally diverse and their tasks are dynamic and complex. It has been argued that shared leadership behaviors, such as continuous reflection, anticipation of a team's information needs, and initiating a team's social influence, positively influence virtual team performance. Country-level effects on shared leadership in globally dispersed teams, however, have been neglected. Building on the country institutional profile developed by Kostova (1997), we argue that regulative, cognitive, and normative components influence the likelihood that the individual will engage in shared leadership behaviors. Analyzing the differences between the institutional profiles of team members' home countries as reflected in institutional diversity as a team-level property, we furthermore point to different levels of institutional diversity as an enabling or hindering condition of shared leadership.

Companies increasingly use cross-functional and cross-cultural teams to master the dual demands of creativity and operational efficiency (Randel & Jaussi, 2003 and Zhang et al., 2007). Besides their cultural diversity, this team set-up often entails team members also being physically dispersed, substituting direct with computer-mediated communication (Hoegl & Proserpio, 2004 and Lovelace et al., 2001). Nevertheless, team members' proximity, or the lack thereof, has potentially important implications, not only for collaboration processes, but also for leadership processes within teams. Leadership in teams can generally be defined as influencing the attitudes and behaviors of individuals as well as the interaction within and between groups regarding the achievement of goals (Bass, 1990). As team dispersion increases, the feasibility of the leader exerting direct influence on the team diminishes. This decrease in feasibility is due to fewer opportunities to directly approach the team members and control their work processes, while cultural diversity puts a further strain on team integration and cohesion. Even though improved use of the latest information and communication technology may partly mitigate this effect (e.g., e-leadership), recent surveys demonstrate that 50% of virtual teams fail to meet either strategic or operational objectives due to the leadership's inability to manage the distributed workforce (Kanawattanachai and Yoo, 2002). With the vertical leaders having limited effectiveness, attention is drawn to the team members as a potential (if not necessary) source of leadership – such as shared leadership – in dispersed project teams (Hoegl and Muethel, 2007). Shared leadership delineates a collective team process through which individual team members share the behaviors and roles of the traditional leader (Pearce and Conger, 2003). It entails a simultaneous, ongoing, mutual influencing process within teams to maximize their potential as a whole (Houghton et al., 2003, Pearce, 2004, Pearce & Manz, 2005a and Pearce & Manz, 2005b). A continuous reflection on the interrelationships between team tasks and on the environmental changes, as well as the anticipation of the team's information needs and the subsequent initiation of social influence is central to this concept (Hoegl and Muethel, 2007). The international dispersion of innovation teams leads to country-level effects influencing shared leadership processes. Although it has been maintained that shared leadership behaviors are generally beneficial in dispersed teams (Hoegl and Muethel, 2007), we argue that individuals' shared leadership behaviors are possibly influenced by country-level determinants. Country-level effects on organizational behavior are reflected by cultural as well as institutional characteristics. Concepts of national culture, such as those developed by Hofstede (2003), House et al., 2004 and Trompenaars & Wooliams, 2005, focus on culture dimensions, such as power distance and uncertainty avoidance. An alternative way of describing the relevant country-level characteristics that potentially influence the behaviors of individuals, teams, and entire organizations, is to examine a country's social institutional environment. Examples of different institutions are a nation's economy, polity, prevailing family structure, and educational system (Cullen et al., 2004 and Messner & Rosenfeld, 2001). Our aim is to consolidate both types of conceptualizations, the cultural and the institutional, and specify their effects on dispersed teams to offer a comprehensive conceptual analysis of how shared leadership is enacted in cross-cultural projects. We therefore offer the following contributions. First, we contribute to context-specific approaches to leadership, which several authors have recently demanded (Porter & McLaughlin, 2006 and Uhl-Bien et al., 2007), as our discussion of shared leadership relates to team collaboration processes in internationally dispersed projects (Furst et al., 2004). Second, our analysis offers insights into cross-cultural influences on shared leadership, thus contributing to discussions in the area of cross-cultural leadership, which are currently dominated by publications on the GLOBE Study (see, for example, Den Hartog et al., 1999, House et al., 2002, Ashkanasy et al., 2002, Howell et al., 2007, Javidan and House, 2002 and Szabo et al., 2002). Third, we extend the traditional view of culture as an exclusive country-level determinant to a more comprehensive view that integrates social institutions (Cullen et al., 2004, Kostova, 1997a and Kostova, 1997b) such as the education system (Meyer, 1977), economic freedom (Kane et al., 2007), and civil liberties (Freedom House, 2007). Fourth, by linking national-level determinants with individual employees' shared leadership behaviors, we contribute to a growing stream of cross-level international research (Cullen et al., 2004, Kostova, 1997a, Kostova, 1997b and Parboteeah & Cullen, 2003). Finally, by applying the differences in team members' institutional profile as team property, we pursue research on team diversity. Institutional diversity, defined as the difference between the institutional profiles of team members' home countries, allows us to analyze how the minimal and maximal differences between team members' profiles influence the team's shared leadership behavior. We begin by presenting shared leadership as one way of successfully dealing with vertical leadership's limited social influence on globally dispersed teams. Thereafter, we describe the societal and cultural characteristics of dispersed team members and offer propositions regarding their influence on shared leadership. We introduce institutional diversity as a team-level property, subsequently developing propositions on the relationship between minimum and maximum levels of institutional diversity and team shared leadership. We conclude by discussing the theoretical implications and consequences for managerial practice.