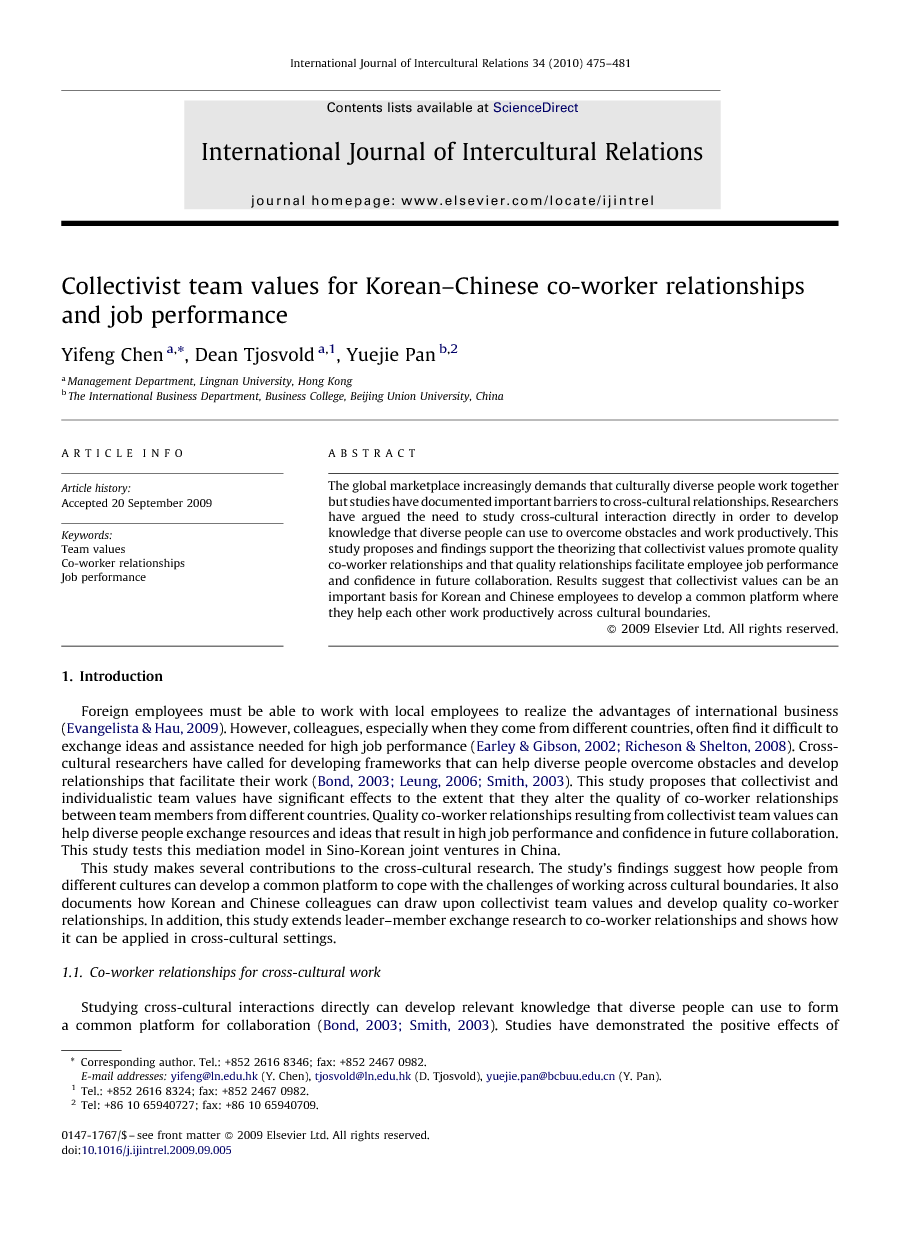 The global marketplace increasingly demands that culturally diverse people work together but studies have documented important barriers to cross-cultural relationships. Researchers have argued the need to study cross-cultural interaction directly in order to develop knowledge that diverse people can use to overcome obstacles and work productively. This study proposes and findings support the theorizing that collectivist values promote quality co-worker relationships and that quality relationships facilitate employee job performance and confidence in future collaboration. Results suggest that collectivist values can be an important basis for Korean and Chinese employees to develop a common platform where they help each other work productively across cultural boundaries.

Foreign employees must be able to work with local employees to realize the advantages of international business (Evangelista & Hau, 2009). However, colleagues, especially when they come from different countries, often find it difficult to exchange ideas and assistance needed for high job performance (Earley and Gibson, 2002 and Richeson and Shelton, 2008). Cross-cultural researchers have called for developing frameworks that can help diverse people overcome obstacles and develop relationships that facilitate their work (Bond, 2003, Leung, 2006 and Smith, 2003). This study proposes that collectivist and individualistic team values have significant effects to the extent that they alter the quality of co-worker relationships between team members from different countries. Quality co-worker relationships resulting from collectivist team values can help diverse people exchange resources and ideas that result in high job performance and confidence in future collaboration. This study tests this mediation model in Sino-Korean joint ventures in China. This study makes several contributions to the cross-cultural research. The study's findings suggest how people from different cultures can develop a common platform to cope with the challenges of working across cultural boundaries. It also documents how Korean and Chinese colleagues can draw upon collectivist team values and develop quality co-worker relationships. In addition, this study extends leader–member exchange research to co-worker relationships and shows how it can be applied in cross-cultural settings. 1.1. Co-worker relationships for cross-cultural work Studying cross-cultural interactions directly can develop relevant knowledge that diverse people can use to form a common platform for collaboration (Bond, 2003 and Smith, 2003). Studies have demonstrated the positive effects of high-quality relationships in leader–member dyads (Graen and Uhl-Bien, 1995 and Liden and Maslyn, 1994). As defined by Graen and his associates (e.g., Liden & Graen, 1980), a high-quality relationship is an in-group exchange characterized by high levels of information, communication, mutual support, informal influence, trust, and negotiating latitude. Previous research on high- and low-quality relationships has focused on leaders and subordinates and has found that quality relationships between managers and employees are key to effective leadership and result in trust and commitment that in turn help employees perform useful tasks (Graen and Uhl-Bien, 1995 and Howell and Hall-Merenda, 1999). Graen and Uhl-Bien (1995) suggested that high-quality relationship exchanges between co-workers can lead to improved influence and coordination between teammates, much as these exchanges do for leaders and employees. When a team has a high average level of co-worker relationships, members can readily feel that everyone is “pulling their weight” and develop a strong sense of group identity (Ford and Seers, 2006 and Seers et al., 2001). Based on the above reasoning, it is hypothesized that: H1. To the extent that Chinese employees develop high-quality co-worker relationships with their Korean teammates, Korean employees perform their jobs effectively and they become confident that they will collaborate effectively in the future. It cannot be assumed that the collectivist values of Koreans and Chinese insure quality relationships. Indeed, collectivists have been found to discriminate more and develop stronger out-group attitudes than individualists (Morales, Lopez-Saez, & Vega, 1999). Chinese have a much stronger tendency to divide people into categories (Chen, Huang, & Tjosvold, 2008) and may exploit people not considered part of their in-group more than people from individualist cultures (Chen, Peng, & Saparito, 2002). The next section argues that Korean and Chinese teammates can draw upon their common culture of collectivism to strengthen their relationships. 1.2. Collectivist team values as a common framework Collectivist compared to individualistic values emphasize a social rather than personal self, that in-group goals are important rather than personal goals, and that social norms rather than individual attitudes should determine behavior (Kim et al., 1994 and Triandis, 1995). A recent meta-analysis suggested that more empirical evidence is needed to document the processes by which these values have their effects on people and their interaction (Oyserrman, Coon, & Kemmelmeier, 2002). Eby and Dobbins (1997) argued that the team orientation of collectivistic values is critical for developing cooperative, productive teams and found that team collectivistic values predicted to team members’ behavior. Team values may well have a stronger, more demonstrable relationship to team member interaction and collaboration than values measured at the individual or cultural level (Hong, Wyer, & Fong, 2008). Based on the above reasoning, it is hypothesized that: H2. To the extent that Korean employees work in teams with collectivist values, they develop high-quality co-worker relationships with Chinese teammates. H3. To the extent that Korean employees work in teams with individualistic values, they develop low quality co-worker relationships with Chinese teammates. Overall, the study proposes a mediation model (Fig. 1). The quality of co-worker relationship between team members from different countries is expected to mediate between collectivist and individualistic team values on job performance and confidence in future collaboration.