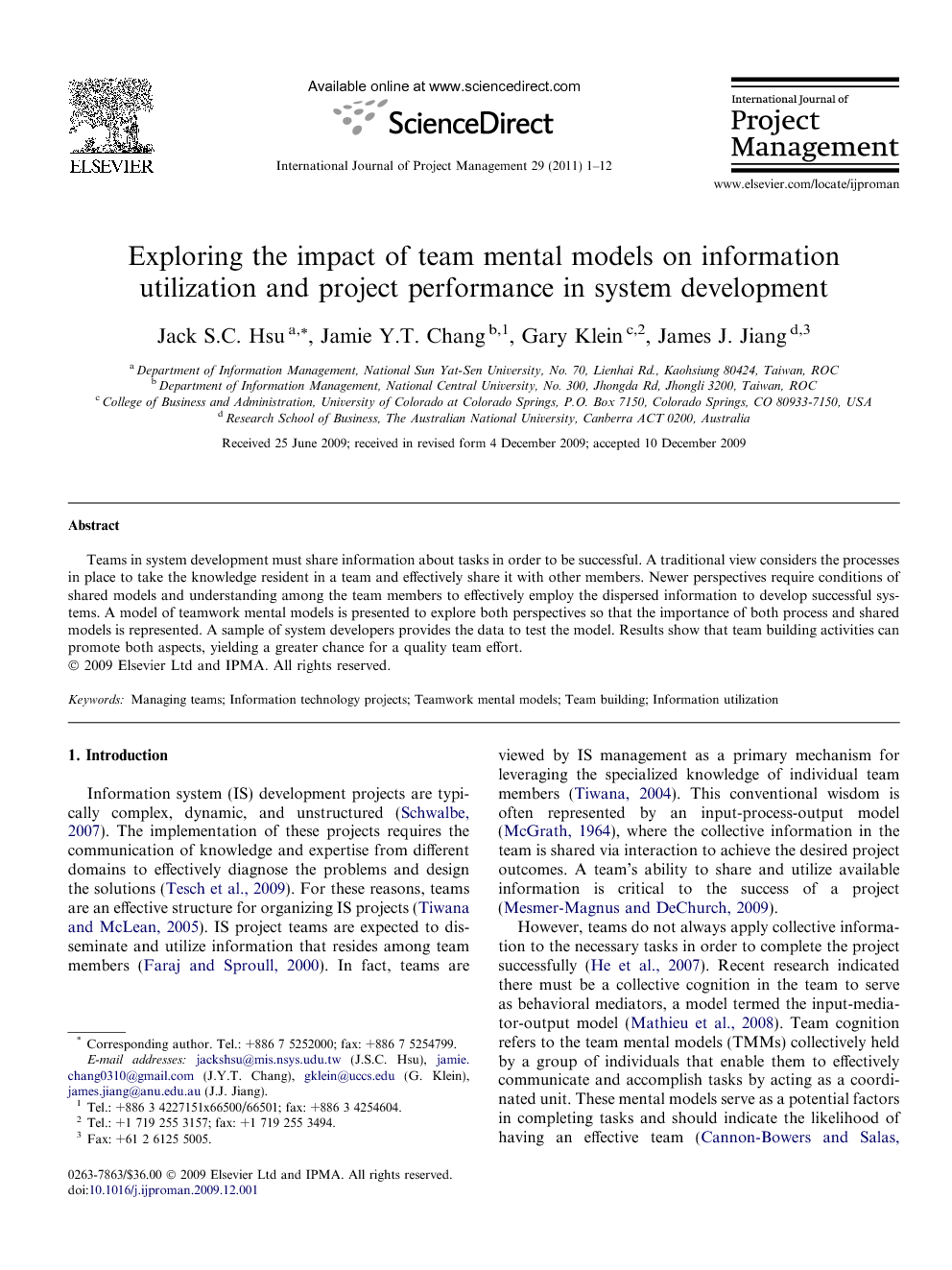 Teams in system development must share information about tasks in order to be successful. A traditional view considers the processes in place to take the knowledge resident in a team and effectively share it with other members. Newer perspectives require conditions of shared models and understanding among the team members to effectively employ the dispersed information to develop successful systems. A model of teamwork mental models is presented to explore both perspectives so that the importance of both process and shared models is represented. A sample of system developers provides the data to test the model. Results show that team building activities can promote both aspects, yielding a greater chance for a quality team effort.

Information system (IS) development projects are typically complex, dynamic, and unstructured (Schwalbe, 2007). The implementation of these projects requires the communication of knowledge and expertise from different domains to effectively diagnose the problems and design the solutions (Tesch et al., 2009). For these reasons, teams are an effective structure for organizing IS projects (Tiwana and McLean, 2005). IS project teams are expected to disseminate and utilize information that resides among team members (Faraj and Sproull, 2000). In fact, teams are viewed by IS management as a primary mechanism for leveraging the specialized knowledge of individual team members (Tiwana, 2004). This conventional wisdom is often represented by an input-process-output model (McGrath, 1964), where the collective information in the team is shared via interaction to achieve the desired project outcomes. A team’s ability to share and utilize available information is critical to the success of a project (Mesmer-Magnus and DeChurch, 2009). However, teams do not always apply collective information to the necessary tasks in order to complete the project successfully (He et al., 2007). Recent research indicated there must be a collective cognition in the team to serve as behavioral mediators, a model termed the input-mediator-output model (Mathieu et al., 2008). Team cognition refers to the team mental models (TMMs) collectively held by a group of individuals that enable them to effectively communicate and accomplish tasks by acting as a coordinated unit. These mental models serve as a potential factors in completing tasks and should indicate the likelihood of having an effective team (Cannon-Bowers and Salas, 2001 and Mohammed and Dumville, 2001). Mediational factors that intervene and translate the influence of team inputs to outcomes are not processes but better conceived as cognitive, motivational, or affective states – referred as emergent states (Ilgen et al., 2005). Team collective cognition is one of the most critical emergent states for team performance (Marks et al., 2001). However, the importance of shared mental models will vary under different contingencies, making the study of such models in system development projects more relevant (Kozlowski and Ilgen, 2006). In the literature, researchers have studied the formation and evolution of team cognition in the IS development project context (He et al., 2007). They observed a positive impact between shared task understanding and project performance. From these two independent streams of work, it appears both processes and mediation are important. Empirical analyses in other disciplines indicate that emergent states and processes are often highly correlated (Barrick et al., 2007 and Kiffin-Petersen, 2004). Thus, studies that consider only one feature variable type (either process or emergent state) are susceptible to problems associated with omitted or 3rd variable issues (Mathieu et al., 2008). In other words, the standard input-process-output models and input-mediator-output models should be merged. Does the logic hold such that there is a relationship between the emergent state of shared team mental models and the process of information utilization as shown in prior work in other disciplines (Mesmer-Magnus and DeChurch, 2009). Team members with a better understanding of how to interact should be able to effectively exchange and utilize the information collectively held by the group. If true, would common management mechanisms, such as continual team building activities, promote an improvement to the shared mental models that then improve performance? The purpose of this study is, therefore, to explore the relationship of team cognition in the form of mental models to their potential impact on IS project performance. Specifically, we argue that a teamwork mental model (teammate model of domain information and interaction model of task completion knowledge) will be positively associated with information utilization. Both the shared mental model presence and effective information utilization (mediation and process) will lead to improved project performance. This argues for the importance of both an input-process-output and input-mediator-output model to explain IS project performance. Finally, we argue that common managerial interventions can help form a common understanding among team members. Team building strategies are often adopted by managers during the team formation stage to enhance teamwork and improve the quality of interaction among team members (Lee-Kelley and Blackman, 2005). Continuation of the activities can serve to reinforce the lessons and further improve chances for eventual success (Jones, 2008). Survey data of IS developers from IS service firms located in India was collected to explore the proposed model. The results indicate that activities associated with team building intervention leads to higher shared TMMs, which in turn facilitate better information utilization within the team. IN addition, IS project performance is influenced by the levels of TMMs and information utilization. In other words, information utilization serves as a partial mediator between TMMs and final project performance.