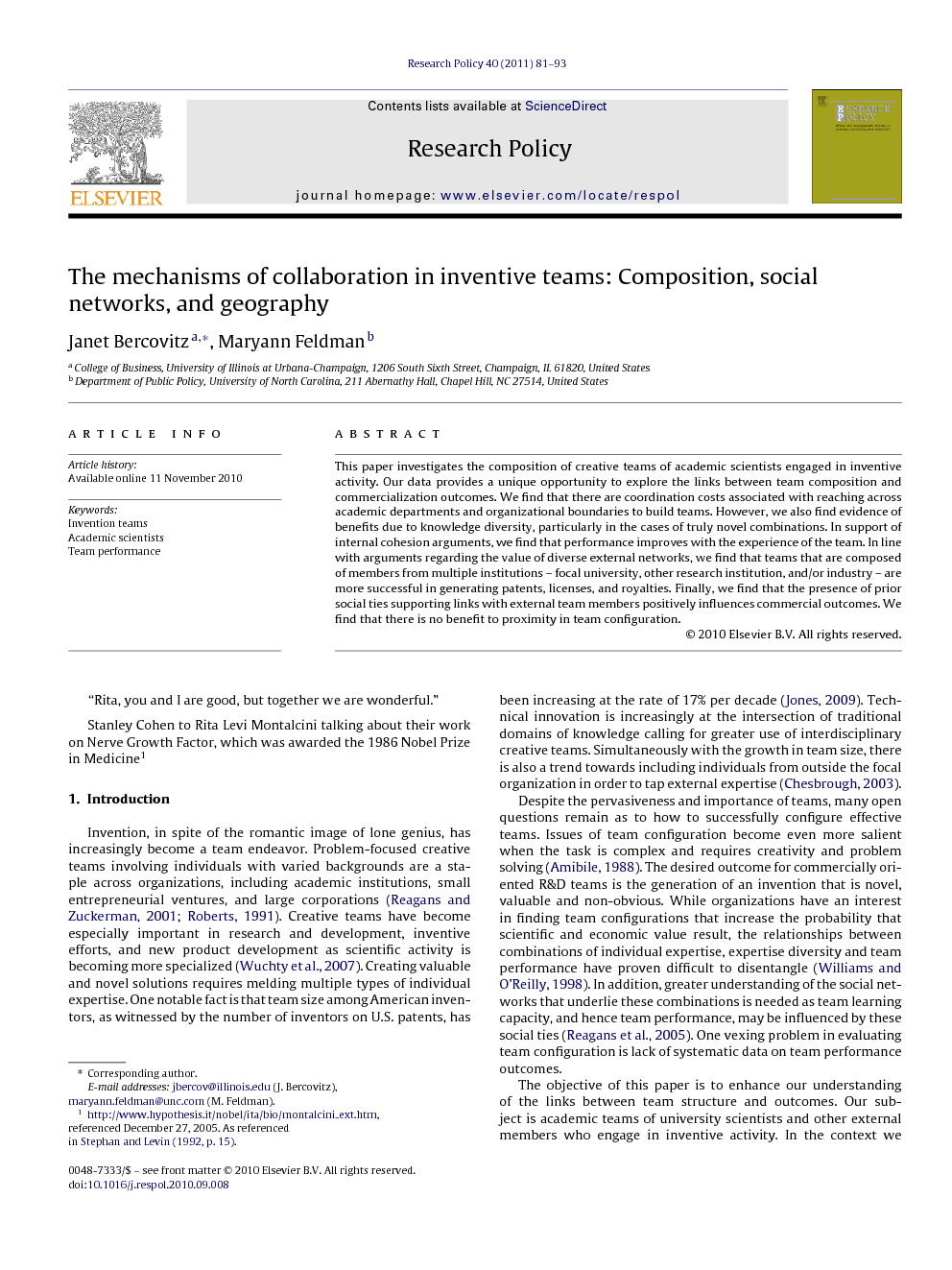 This paper investigates the composition of creative teams of academic scientists engaged in inventive activity. Our data provides a unique opportunity to explore the links between team composition and commercialization outcomes. We find that there are coordination costs associated with reaching across academic departments and organizational boundaries to build teams. However, we also find evidence of benefits due to knowledge diversity, particularly in the cases of truly novel combinations. In support of internal cohesion arguments, we find that performance improves with the experience of the team. In line with arguments regarding the value of diverse external networks, we find that teams that are composed of members from multiple institutions – focal university, other research institution, and/or industry – are more successful in generating patents, licenses, and royalties. Finally, we find that the presence of prior social ties supporting links with external team members positively influences commercial outcomes. We find that there is no benefit to proximity in team configuration.

Invention, in spite of the romantic image of lone genius, has increasingly become a team endeavor. Problem-focused creative teams involving individuals with varied backgrounds are a staple across organizations, including academic institutions, small entrepreneurial ventures, and large corporations (Reagans and Zuckerman, 2001 and Roberts, 1991). Creative teams have become especially important in research and development, inventive efforts, and new product development as scientific activity is becoming more specialized (Wuchty et al., 2007). Creating valuable and novel solutions requires melding multiple types of individual expertise. One notable fact is that team size among American inventors, as witnessed by the number of inventors on U.S. patents, has been increasing at the rate of 17% per decade (Jones, 2009). Technical innovation is increasingly at the intersection of traditional domains of knowledge calling for greater use of interdisciplinary creative teams. Simultaneously with the growth in team size, there is also a trend towards including individuals from outside the focal organization in order to tap external expertise (Chesbrough, 2003). Despite the pervasiveness and importance of teams, many open questions remain as to how to successfully configure effective teams. Issues of team configuration become even more salient when the task is complex and requires creativity and problem solving (Amibile, 1988). The desired outcome for commercially oriented R&D teams is the generation of an invention that is novel, valuable and non-obvious. While organizations have an interest in finding team configurations that increase the probability that scientific and economic value result, the relationships between combinations of individual expertise, expertise diversity and team performance have proven difficult to disentangle (Williams and O’Reilly, 1998). In addition, greater understanding of the social networks that underlie these combinations is needed as team learning capacity, and hence team performance, may be influenced by these social ties (Reagans et al., 2005). One vexing problem in evaluating team configuration is lack of systematic data on team performance outcomes. The objective of this paper is to enhance our understanding of the links between team structure and outcomes. Our subject is academic teams of university scientists and other external members who engage in inventive activity. In the context we study, team composition is internally managed rather than externally assigned or determined. This means that teams are able to self-organize, providing an ability to experiment with different configurations of individuals, including adding members from different departments or even other organizations. We have detailed data on the individuals that comprise the invention team. We are able to follow inventive teams from the initial reporting or disclosure of their invention and the progress the idea makes towards realizing commercial value. In this process there are a variety of outcome measures such as the granting of a patent based on the invention, the subsequent licensing of that intellectual property to a commercial firm, and finally, the generation of royalties from the license. Thus, we can test how different constructs of team composition affect team performance using econometric methods. This provides a unique opportunity to study how team composition affects outcomes and productivity. The paper is organized as follows. Section 2 provides a review of the literature and develops hypotheses about creative team composition and effectiveness. Section 3 introduces our data and study context and develops our empirical measures. Section 4 presents results and Section 5 concludes.