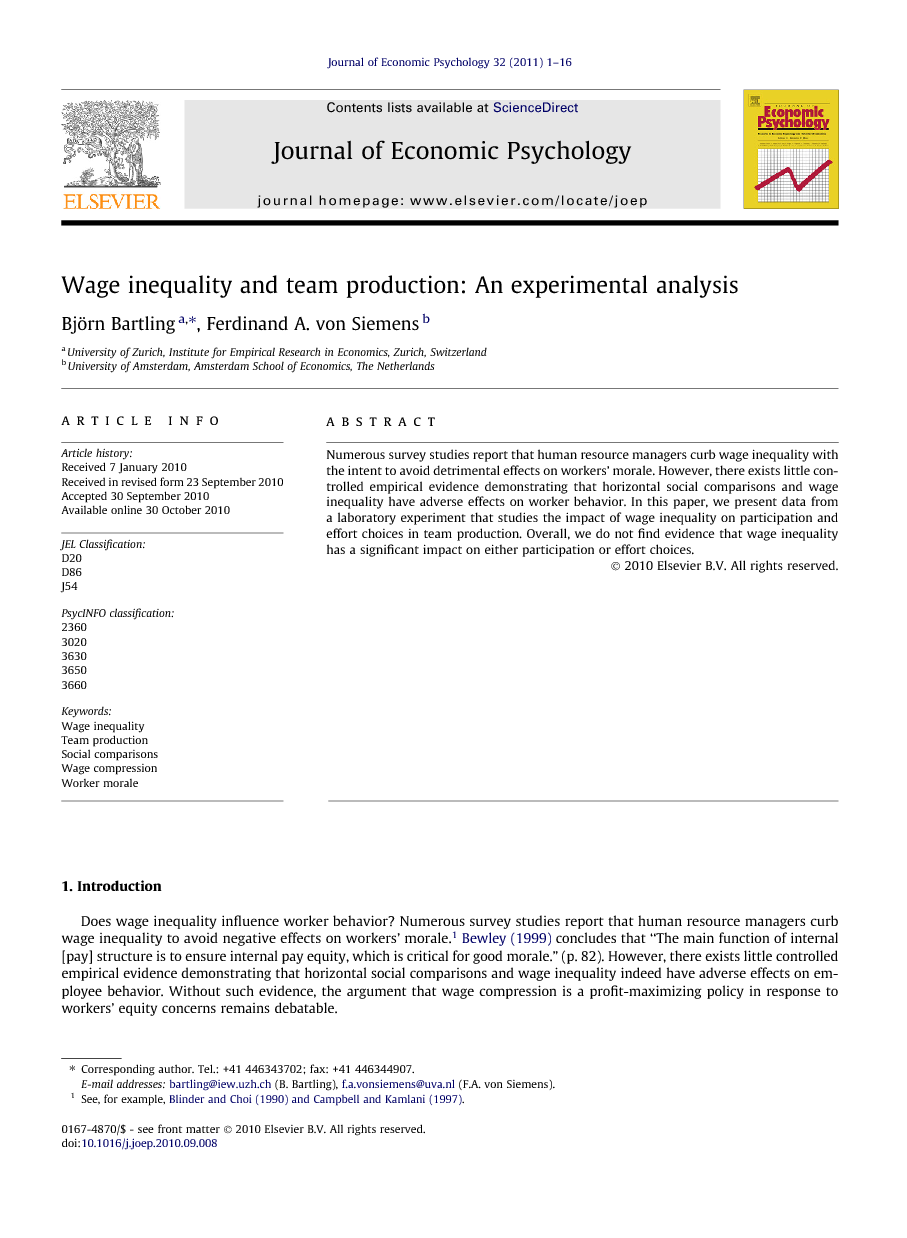 Does wage inequality influence worker behavior? Numerous survey studies report that human resource managers curb wage inequality to avoid negative effects on workers’ morale.1Bewley (1999) concludes that “The main function of internal [pay] structure is to ensure internal pay equity, which is critical for good morale.” (p. 82). However, there exists little controlled empirical evidence demonstrating that horizontal social comparisons and wage inequality indeed have adverse effects on employee behavior. Without such evidence, the argument that wage compression is a profit-maximizing policy in response to workers’ equity concerns remains debatable. In this paper, we report data from a laboratory experiment that studies the impact of wage inequality on participation and effort choices in team production. In our experiment, subjects must first decide whether or not to engage in team production. If they join a team, they can contribute costly effort to produce some joint team output. In return they receive a wage payment. Wage payments increase in team output but they are also influenced by individual stochastic shocks. In our experiments, we vary the correlation of these wage shocks: in one treatment the shocks are perfectly positively correlated so that both team members always get the same wage (“Equal Wages”). In another treatment the shocks are perfectly negatively correlated so that wages always differ (“Unequal Wages”). The important feature of the experimental design is the following: for given team output expected wages and thus monetary incentives to exert effort are identical in both treatments, but expected wage inequality differs decidedly. In a formal model we explicitly show that if sufficiently many agents are inequity averse and suffer utility losses from wage inequality, we should observe a clear treatment effect: average effort levels should be lower and agents should be less keen in participating in team production. In contrast, if all agents are purely self-interested, the treatment difference should not affect effort and participation choices. We study the impact of wage inequality on subjects’ team participation choices and effort levels by analyzing behavior across subjects in our two treatments. Overall, our experimental data cannot reject the null-hypothesis that expected wage inequality has no impact on either participation or effort choices. Our paper complements several recent laboratory experiments that analyze horizontal social comparisons in employment relationships. In Abeler, Altmann, Kube, and Wibral (forthcoming) workers exert effort which firms can then reward with discretionary bonus payments. They find that forcing firms to pay the same bonus to both workers reduces worker effort. The reason is that reciprocity considerations are violated when different effort levels lead to identical bonus payments, and agents who suffer from a violation of their reciprocity considerations subsequently withdraw effort. Maximiano, Sloof, and Sonnemans (2007) study a gift-exchange situation in which firms can offer several workers high fixed wages to induce them to reciprocate with high voluntary effort. They find that the reciprocity relationship between firms and workers is not affected by the number of workers per firm. However, the impact of wage inequality on workers’ participation and effort decisions cannot be studied since they restrict firms to offer equal wages. Charness and Kuhn (2007) extend Maximiano, Sloof, and Sonnemans by allowing firms to offer different wages to different workers whose productivities differ. They find that workers’ effort choices do not depend on co-workers’ wages. In contrast to the seminal theoretical contributions by Akerlof, 1982 and Akerlof and Yellen, 1990, the experimental literature thus largely suggests that wage compression relative to productivity does not seem to be an optimal firm response to co-worker equity concerns.2. Our paper differs in important ways from the existing experimental studies. First, in our experiment we have no subjects acting as firms or principals who set wages. Vertical fairness concerns between firm and worker thus cannot overshadow horizontal social comparisons among workers. Second, the absence of a subject in the role of the principal who sets wages allows us to exogenously vary wage inequality in our treatments. In contrast, Charness and Kuhn implemented productivity differences to induce principals to pay different wages, and such productivity differences might justify wage differences. Third, in our experiment workers jointly produce output that is distributed among them. This payoff interdependence should, if it has any behavioral effect, amplify horizontal social comparisons. Despite these design features, which were all implemented to foster horizontal social comparisons, our results corroborate the existing laboratory evidence that wage inequality does not have adverse behavioral consequences. Our experimental study also contributes to a series of recent theory papers that investigate the impact of horizontal equity concerns on optimal contracts in moral hazard situations with multiple agents.3 Two major effects of equity concerns emerge in this literature. First, agents with other-regarding preferences (such as inequity aversion as formulated by Fehr & Schmidt (1999)) must be compensated for expected wage inequality if their participation constraint is binding. Second, wage inequality affects agents’ effort choices if by exerting more or less effort agents can reduce wage inequality. We do not explicitly test any particular one of the existing theory models. Rather, we concentrate on finding evidence for these two major effects that were formulated in this literature and that should (as we formally derive below) show up in our experimental setting if sufficiently many agents are inequity averse and compare wages. However, our data does not suggest that wage inequality has an impact on agents’ participation decision, nor do we find that wage inequality affects effort choices. The remainder of the paper is organized as follows. Section 2 develops a simple model of wage inequality in team production. The model allows us to formally derive our hypothesis on the impact of wage inequality on effort and participation decisions in our experimental team production game. Section 3 explains the experimental design and procedures in detail and states our hypothesis. Section 4 presents the results of our study. Section 5 concludes.

In this paper we report on a laboratory experiment that investigates the impact of wage inequality on participation and effort decisions in team production. The data suggest that wage inequality has no significant behavioral effects. These results are in line with recent laboratory experiments that call the importance of horizontal social comparisons in labor relationships into question. In particular, Charness and Kuhn (2007) study a gift-exchange setting with one principal and two agents whose productivites differ. They find that effort is highly sensitive to own wages but detect little or no response of effort to co-worker wages. Their experimental design, however, has three features that might attenuate horizontal social comparisons. First, the existence of a subject in the role of a principal induces vertical comparisons. These might overshadow horizontal social comparisons. Second, while an agent is in a direct exchange relation with the principal, there is no interaction among the agents. It is thus not clear why the agents should compare themselves to each other. Third, the agents differ in their productivites, which might justify wage differences. Our experimental design addresses these concerns. First, we have no subjects acting as principals who are setting wages. Vertical fairness concerns thus cannot overshadow horizontal social comparisons. Second, in our experiment workers jointly produce output, which should induce participants to see the other team member as a salient point of comparison. Third, team members are ex ante identical, i.e. no productivity difference might justify unequal wage payments. Despite the elimination of the features that might dampen the effects of horizontal social comparisons, our results support Charness and Kuhn’s finding that wage inequality does not have an adverse effect on effort choices. Moreover, we also included a participation decision in our experimental design. Even if effort choices do not decline in reaction to wage inequality, subjects might still find it less attractive to join a team that is characterized by wage inequality. We again fail to find such a pattern in the data. Human resource managers believe that workers’ perceptions of fairness affect productivity (Bewley, 1999). Why do our results not confirm this belief? One explanation is that wage inequality does not have an adverse effect on worker morale (as suggested by the experimental evidence) and that the frequent reference to fairness norms is an attempt to strengthen workers’ position in union wage bargaining. For example, Kole and Lehn (2000) describe wage bargaining in the wake of the merger of two firms in the oil industry. Referring to fairness norms, employees of the firm that paid lower wages prior to the merger negotiated a substantial pay increase. While the increased wage costs severely reduced the profitability of the merger, it remains unproven that an adverse reaction on worker morale had occurred had the management not given into the wage adjustment. Another explanation for the absence of an effect of wage inequality on worker morale is that our experimental setting does not display the relevant inequality. In our production environment, each subject had the same chance of getting the high or the low wage, i.e. team members were ex ante identical. If subjects only dislike ex ante but do not care about ex post wage inequality, social comparisons would have no effect in our treatment with unequal wages. Finally, the experimental design might simply have failed to establish the respective other team member as a relevant reference point. In real live work environments, social interactions are often on a long-term basis and they are certainly much more intense compared to anonymous laboratory interactions. Indeed, some labor market field experiments – maybe because they are more capable of establishing a natural work environment – do find effects of wage inequality on worker behavior.16 In sum, our results suggest that more research is needed to consolidate our understanding of the effects of horizontal social comparisons on worker behavior in labor relationships.