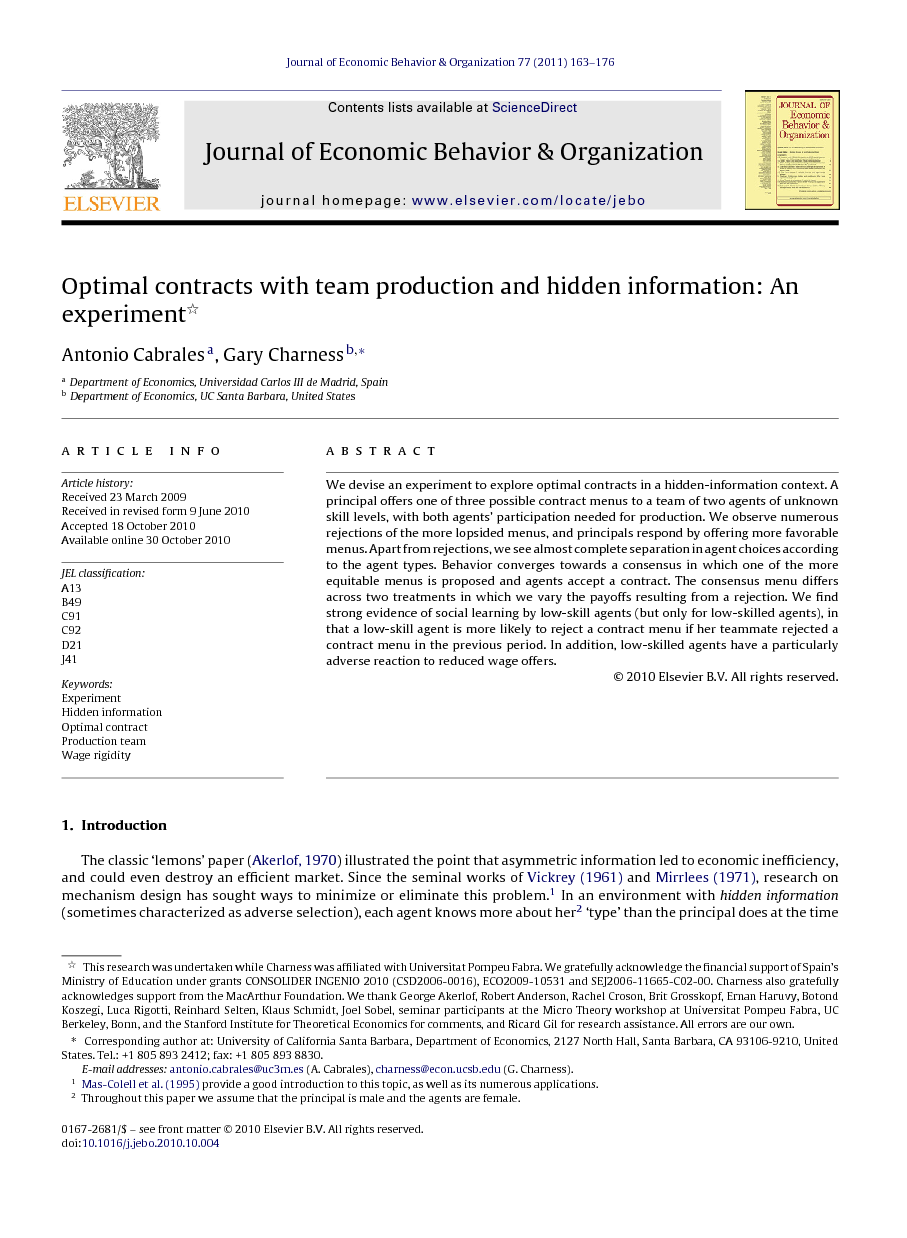 We devise an experiment to explore optimal contracts in a hidden-information context. A principal offers one of three possible contract menus to a team of two agents of unknown skill levels, with both agents’ participation needed for production. We observe numerous rejections of the more lopsided menus, and principals respond by offering more favorable menus. Apart from rejections, we see almost complete separation in agent choices according to the agent types. Behavior converges towards a consensus in which one of the more equitable menus is proposed and agents accept a contract. The consensus menu differs across two treatments in which we vary the payoffs resulting from a rejection. We find strong evidence of social learning by low-skill agents (but only for low-skilled agents), in that a low-skill agent is more likely to reject a contract menu if her teammate rejected a contract menu in the previous period. In addition, low-skilled agents have a particularly adverse reaction to reduced wage offers.

We explore the problem of optimal contract menus with hidden information and team production in a laboratory experiment matching a principal with two agents of unknown level of skill. Agents of both types often reject the most unfavorable contract menu, and principals respond to rejections of their proposals by offering more agent-favorable menus. After the principals learn the (evolving and heterogeneous) standard for menu acceptability, the production team functions in a relatively efficient manner, with agents choosing contracts in accordance with their types and nearly complete separation. Rejection rates are much higher in Treatment 1, where the reservation payoffs are higher. This difference in reservation payoffs also leads to a different prevailing contract menu in our two treatments, and there is a substantial degree of heterogeneity in the behavior of both principals and agents. We also find strong social learning by low-skill agents, who are more likely to reject a contract menu if they have observed a rejection from the other agent in the previous period, perhaps updating their views about the social norms and adjusting their values accordingly. The likelihood of rejection by high-skill agents is not sensitive to observed rejections by other agents, perhaps because only the more motivated high-skill agents will sacrifice the larger offered payoff. Agents are less likely to reject a menu when it is an improvement over the one assigned in the previous period. Low-skill agents are considerably more likely to reject a particular menu when it offers a lower wage than the menu offered in the previous period, although we do not see this effect for high agents. Thus, we see downward rigidity in wages for the disadvantaged agent. The nearly complete separation by agent types suggests that incentive-compatible contract menus can be very effective, provided that they are not considered unfair. Since there is so much heterogeneity regarding what is unfair, it may be difficult to develop a contract menu that is optimal for all agents; however, it may be that social learning is helpful in eventually achieving a consensus. In any event, since more effective contracts are likely to lead to better economic outcomes, we echo the view (Güth et al., 2001, p. 85) that “there is a need for behavioral contract theory, based on empirical findings.” It is clear that further evidence on contracts and agent behavior is needed.