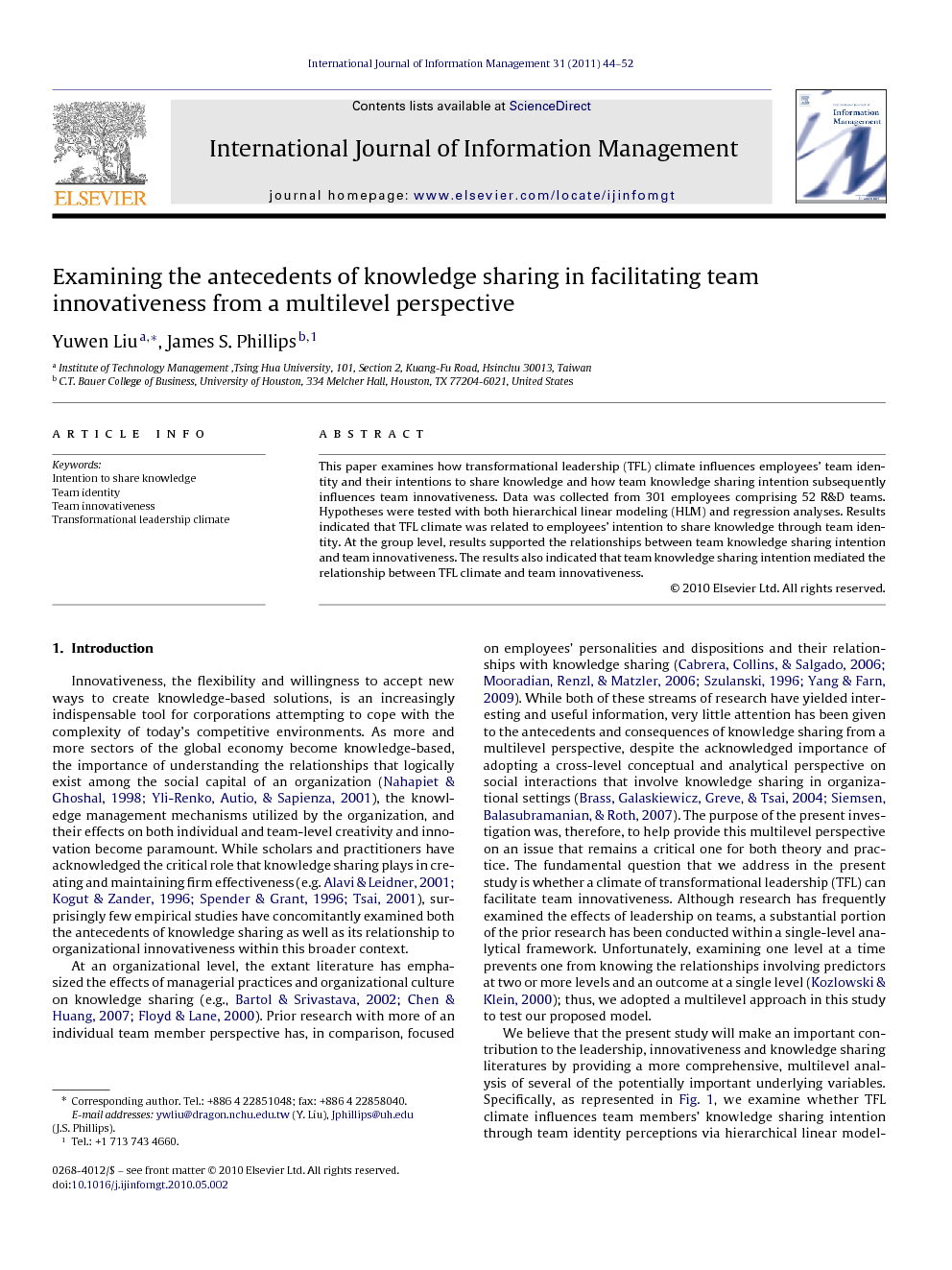 Innovativeness, the flexibility and willingness to accept new ways to create knowledge-based solutions, is an increasingly indispensable tool for corporations attempting to cope with the complexity of today's competitive environments. As more and more sectors of the global economy become knowledge-based, the importance of understanding the relationships that logically exist among the social capital of an organization (Nahapiet and Ghoshal, 1998 and Yli-Renko et al., 2001), the knowledge management mechanisms utilized by the organization, and their effects on both individual and team-level creativity and innovation become paramount. While scholars and practitioners have acknowledged the critical role that knowledge sharing plays in creating and maintaining firm effectiveness (e.g. Alavi and Leidner, 2001, Kogut and Zander, 1996, Spender and Grant, 1996 and Tsai, 2001), surprisingly few empirical studies have concomitantly examined both the antecedents of knowledge sharing as well as its relationship to organizational innovativeness within this broader context. At an organizational level, the extant literature has emphasized the effects of managerial practices and organizational culture on knowledge sharing (e.g., Bartol and Srivastava, 2002, Chen and Huang, 2007 and Floyd and Lane, 2000). Prior research with more of an individual team member perspective has, in comparison, focused on employees’ personalities and dispositions and their relationships with knowledge sharing (Cabrera et al., 2006, Mooradian et al., 2006, Szulanski, 1996 and Yang and Farn, 2009). While both of these streams of research have yielded interesting and useful information, very little attention has been given to the antecedents and consequences of knowledge sharing from a multilevel perspective, despite the acknowledged importance of adopting a cross-level conceptual and analytical perspective on social interactions that involve knowledge sharing in organizational settings (Brass et al., 2004 and Siemsen et al., 2007). The purpose of the present investigation was, therefore, to help provide this multilevel perspective on an issue that remains a critical one for both theory and practice. The fundamental question that we address in the present study is whether a climate of transformational leadership (TFL) can facilitate team innovativeness. Although research has frequently examined the effects of leadership on teams, a substantial portion of the prior research has been conducted within a single-level analytical framework. Unfortunately, examining one level at a time prevents one from knowing the relationships involving predictors at two or more levels and an outcome at a single level (Kozlowski & Klein, 2000); thus, we adopted a multilevel approach in this study to test our proposed model. We believe that the present study will make an important contribution to the leadership, innovativeness and knowledge sharing literatures by providing a more comprehensive, multilevel analysis of several of the potentially important underlying variables. Specifically, as represented in Fig. 1, we examine whether TFL climate influences team members’ knowledge sharing intention through team identity perceptions via hierarchical linear modeling (HLM; Raudenbush & Bryk, 2002); and subsequently whether these enhanced team knowledge sharing intentions can explain the relationship between leadership climate and team innovativeness.

It has become nearly axiomatic that knowledge sharing among team members, especially those who are performing complex, interdependent tasks such as R&D work is essential for maintaining high levels of group and organizational productivity (Haas and Hansen, 2007 and Liao, 2008). As such, there is a growing need for research to explore both the antecedents and the consequences of knowledge sharing intentions. Clearly, however, since both intragroup and intergroup communications are embedded in a larger, socially rich context, no one study can fully capture all of the antecedents and consequences of knowledge sharing at one, let alone multiple levels of analysis. Nonetheless, the overall pattern of results that already exists in the organizational literature suggested to us that a workgroup climate characterized by high levels of transformational leadership (TFL) should have positive effects on team members’ knowledge sharing intention through a meditational effect on team identity. This proposition was tested among 52 intact work teams in Taiwanese organizations and the results of our investigation were generally supportive. Using multilevel analytic techniques we found that TFL climate was indeed positively related to knowledge sharing intentions and this effect could be in part explained by the strength of members’ identification with the team. Moreover, we found that TFL climate was positively related to team innovativeness through a meditational effect of team knowledge sharing intention. What implications does this study have for researchers and practitioners? Based on our results, we would first suggest that the role that our proposed antecedents to knowledge sharing play on team innovativeness is more thoroughly understood when it is viewed from a multilevel perspective. Although there are undoubtedly a number of important single-level inputs, the complex interactive nature of individual, group, and organizational processes cannot be fully appreciated without this multilevel approach. In other words, although the decision to share knowledge may occur at an individual level, we simply cannot ignore the potentially powerful influences of team or organizational level variables on employees’ intention to share knowledge. To our knowledge, the present research is the first to study the effect of knowledge sharing on team innovativeness from both individual and group level perspectives. As such, this study will hopefully allow researchers and practitioners alike to adopt a more comprehensive model for enhancing knowledge sharing intentions among work group members. Taken as a whole, the results of the present investigation were consistent with prior research on leadership, knowledge sharing, and group productivity. While we can only speculate at this time, it is nonetheless interesting to consider the possibility that the positive effects of knowledge sharing that occurred in our sample were attributable to a transformational leadership climate's unique capacity to align team members’ individual goals with the team's goals in a way that more traditional transactional leadership climates simply cannot. It is also interesting to speculate about other potential mechanisms through which transformational leadership might positively influence knowledge sharing despite our not having the luxury and/or capability to measure all such mechanisms. Of special interest, given our focus on leadership processes is the potential effect that transformational styles might have on workgroup members’ perceptions of psychological safety (Edmondson, 1999). Since sharing information with colleagues does have inherent risk to one's own standing in an organization (especially if group and individual rewards are not properly aligned), the workgroup's overall sense of trust and cooperation are logically critical to their willingness to share job-relevant knowledge (Siemsen et al., 2007 and Siemsen et al., 2009). Likewise, group efficacy also influences knowledge sharing intentions (Srivastava et al., 2006) and it is also conceptually closely aligned with team identity. Given the focus of transformational leadership styles, it seems quite reasonable to posit that such leadership will have a significantly more positive effect on psychological safety while enhancing team efficacy than would more transactional styles. As such, we would encourage future research to attempt to simultaneously measure all of these conceptually related aspects of a workgroup's climate and its effects on knowledge sharing intentions. The notion that TFL might be an effective way to align team members’ and team's goals, thereby facilitating members’ intentions to share knowledge is especially pertinent in light of the recent work of Haas and Hansen (2007). Their results indicate that more knowledge per se should not necessarily be the actual purpose underlying an organization's desire to increase members’ intention to share information with one another. To the contrary, if an organization wishes to enhance innovativeness through knowledge sharing, it must do so by ensuring that the “correct” type and source of information is disseminated. It is here where TFL climate might play a crucial role, especially in non-routine environments. Without the alignment of members’ and team's goals, knowledge sharing may have little or no positive effect on team innovativeness. This notion reflects the importance of examining the antecedents of knowledge sharing while exploring the effects of knowledge sharing on team innovativeness or productivity. Similarly, in the present study we did not attempt to measure whether knowledge sharing among team members involved primarily explicit, job-relevant information or more implicit or tacit information. In addition to Haas and Hansen's (2007) focus, there clearly could be different psychological climates that foster knowledge sharing depending on what kind of information needs distributed. In an R&D environment, substantial information that may positively influence task performance is, logically, more of a tacit nature. Interestingly, however, one might argue that it is precisely this form of information about which more personal risk is assumed. As we have suggested elsewhere, an organization's reward structures definitely need to align with these knowledge sharing needs if transformational leadership (or any other style for that matter) is going to facilitate the process. Therefore, future research may need to more carefully articulate between both amounts and types of information to gain a thorough understanding of TFL's role in facilitating knowledge sharing among team members.