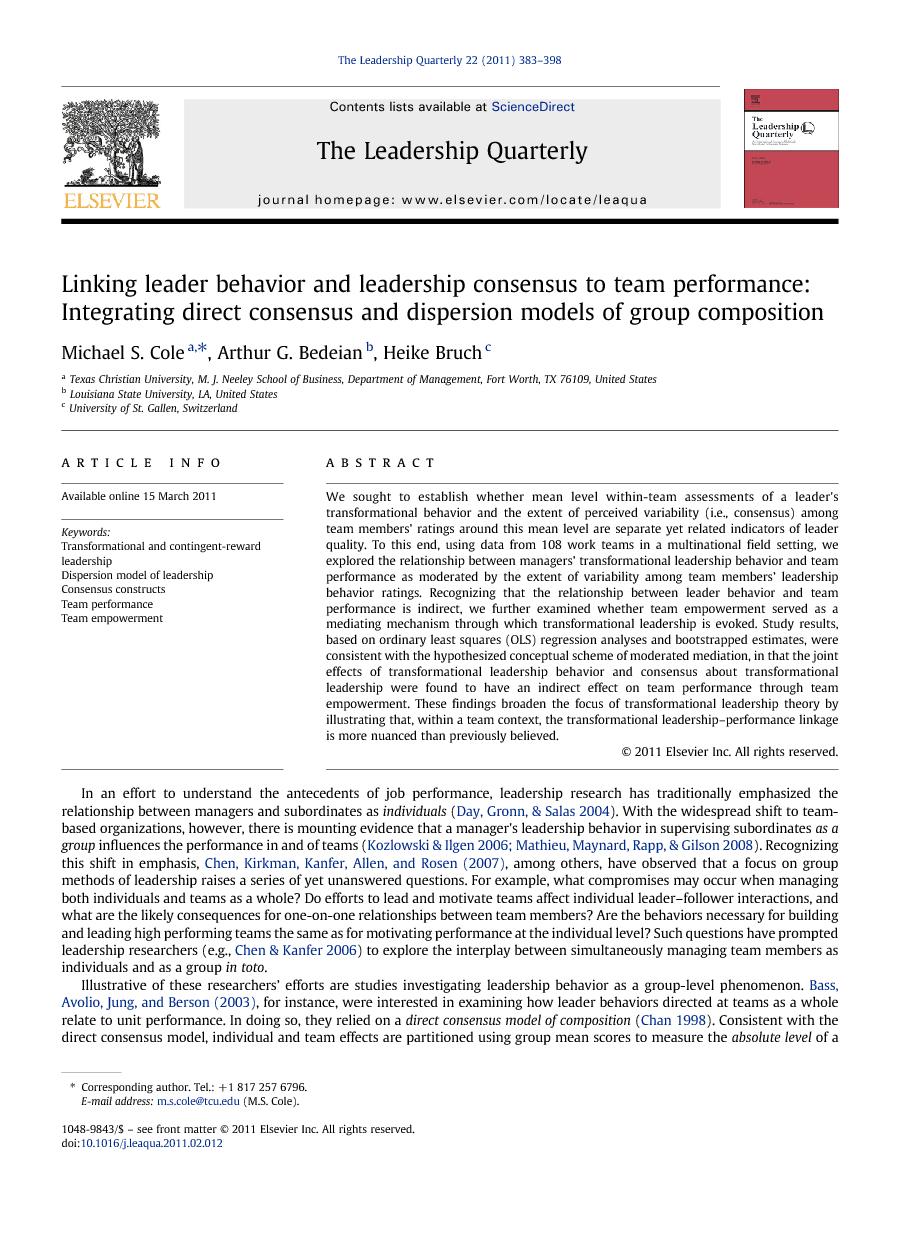 In an effort to understand the antecedents of job performance, leadership research has traditionally emphasized the relationship between managers and subordinates as individuals (Day, Gronn, & Salas 2004). With the widespread shift to team-based organizations, however, there is mounting evidence that a manager's leadership behavior in supervising subordinates as a group influences the performance in and of teams ( Kozlowski and Ilgen, 2006 and Mathieu et al., 2008). Recognizing this shift in emphasis, Chen, Kirkman, Kanfer, Allen, and Rosen (2007), among others, have observed that a focus on group methods of leadership raises a series of yet unanswered questions. For example, what compromises may occur when managing both individuals and teams as a whole? Do efforts to lead and motivate teams affect individual leader–follower interactions, and what are the likely consequences for one-on-one relationships between team members? Are the behaviors necessary for building and leading high performing teams the same as for motivating performance at the individual level? Such questions have prompted leadership researchers (e.g., Chen & Kanfer 2006) to explore the interplay between simultaneously managing team members as individuals and as a group in toto. Illustrative of these researchers’ efforts are studies investigating leadership behavior as a group-level phenomenon. Bass, Avolio, Jung, and Berson (2003), for instance, were interested in examining how leader behaviors directed at teams as a whole relate to unit performance. In doing so, they relied on a direct consensus model of composition (Chan 1998). Consistent with the direct consensus model, individual and team effects are partitioned using group mean scores to measure the absolute level of a leader's behavior. Tests of within-group agreement (e.g., rwg; James, Demaree, & Wolf 1984) are typically then computed to determine whether creating aggregate scores from individual level data is empirically justifiable; unexplained variance is regarded as noise or measurement error (Kozlowski & Klein 2000). In contrast to this view, it has been increasingly argued that unexplained variance among team members’ assessments may convey relevant unit-level information rather than simply reflect error variance (Chan, 1998 and Harrison and Klein, 2007). Exploring this possibility, leadership researchers have recently considered what are termed dispersion models of group composition. In a dispersion composition model, within-group variance (or, alternatively, within-group agreement or consensus) is treated as a meaningful higher level construct rather than a statistical prerequisite for aggregation (Chan 1998). Within the leadership domain, the extent to which team members agree about the quality of their managers’ leadership behavior has been dubbed leadership consensus (Feinberg, Ostroff, & Burke 2005; see also Lindell & Brandt 2000). In a dispersion composition model, leadership consensus is considered high when team members’ perceptions of a leader's behavior are homogenous. Conversely, leadership consensus is considered low when team members’ perceptions of a leader's behavior are heterogonous or dissimilar. In either instance, the degree of consensus is, by definition, a group-level measure of the amount of variability in team members’ perceptions of the quality of their managers’ leadership behavior. As discussed below, evidence from a handful of studies suggests that team members’ consensual perceptions about the quality of their managers’ leadership behavior may be an important explanatory variable for understanding the influence of leadership within teams. The primary aim of the present study was to extend transformational leadership research by integrating a direct consensus model of composition and a dispersion model of group composition within a single framework. To this end, the present study contributes to the leadership literature in two ways. First, it answers recent calls for research exploring whether differences in leadership consensus moderate the relationship between the general (i.e., average) behavior exhibited by a leader and team performance (e.g., Cole and Bedeian, 2007 and Dawson et al., 2008). The current investigation focuses on transformational leader behaviors for two principal reasons: (a) they “dominate” current thinking about leadership research and (b) they are at the core of contemporary leadership theory (Judge & Piccolo 2004, p. 762). Second, recognizing that the relationship between leaders’ transformational behavior and team performance may not be direct, we cast team empowerment as a mediating mechanism in an attempt to replicate prior research (e.g., Chen et al. 2007). In doing so, the present study responds to Schaubroeck, Lam, and Cha's (2007) challenge that leadership researchers go beyond investigating transformational leadership's main effects (at the team level) and to examine not only the boundary conditions under which transformational leadership is most likely to be effective, but also the mediating processes by which transformational leadership exerts its effect on workplace outcomes. Thus, by simultaneously considering leadership consensus and team empowerment in a hypothesized model, we broaden the focus of transformational leadership theory by illustrating that the transformational leadership team performance linkage is more nuanced than previously believed.