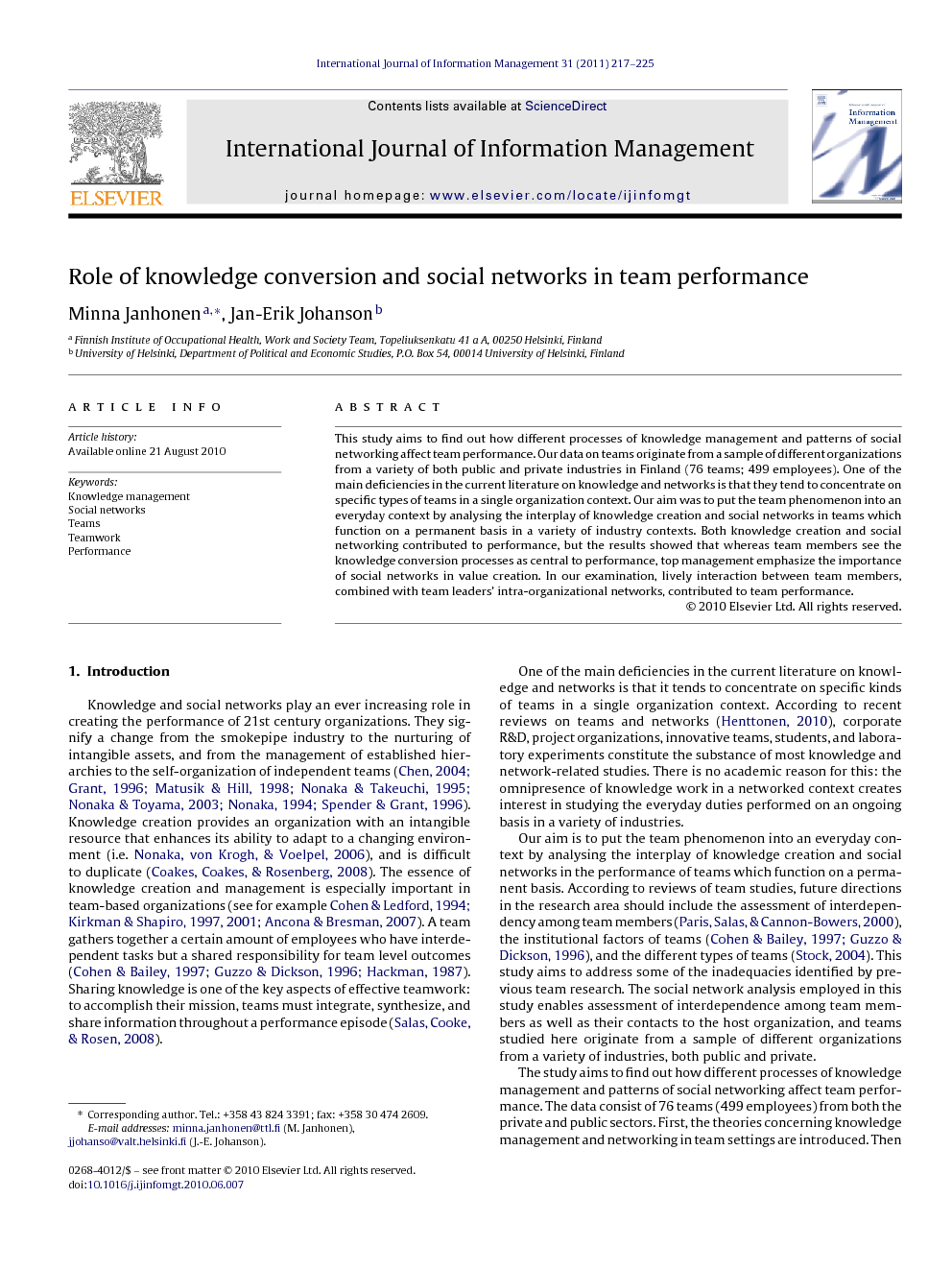 This study aims to find out how different processes of knowledge management and patterns of social networking affect team performance. Our data on teams originate from a sample of different organizations from a variety of both public and private industries in Finland (76 teams; 499 employees). One of the main deficiencies in the current literature on knowledge and networks is that they tend to concentrate on specific types of teams in a single organization context. Our aim was to put the team phenomenon into an everyday context by analysing the interplay of knowledge creation and social networks in teams which function on a permanent basis in a variety of industry contexts. Both knowledge creation and social networking contributed to performance, but the results showed that whereas team members see the knowledge conversion processes as central to performance, top management emphasize the importance of social networks in value creation. In our examination, lively interaction between team members, combined with team leaders’ intra-organizational networks, contributed to team performance.

Knowledge and social networks play an ever increasing role in creating the performance of 21st century organizations. They signify a change from the smokepipe industry to the nurturing of intangible assets, and from the management of established hierarchies to the self-organization of independent teams (Chen, 2004, Grant, 1996, Matusik and Hill, 1998, Nonaka and Takeuchi, 1995, Nonaka and Toyama, 2003, Nonaka, 1994 and Spender and Grant, 1996). Knowledge creation provides an organization with an intangible resource that enhances its ability to adapt to a changing environment (i.e. Nonaka, von Krogh, & Voelpel, 2006), and is difficult to duplicate (Coakes, Coakes, & Rosenberg, 2008). The essence of knowledge creation and management is especially important in team-based organizations (see for example Cohen and Ledford, 1994, Kirkman and Shapiro, 1997, Kirkman and Shapiro, 2001 and Ancona and Bresman, 2007). A team gathers together a certain amount of employees who have interdependent tasks but a shared responsibility for team level outcomes (Cohen and Bailey, 1997, Guzzo and Dickson, 1996 and Hackman, 1987). Sharing knowledge is one of the key aspects of effective teamwork: to accomplish their mission, teams must integrate, synthesize, and share information throughout a performance episode (Salas, Cooke, & Rosen, 2008). One of the main deficiencies in the current literature on knowledge and networks is that it tends to concentrate on specific kinds of teams in a single organization context. According to recent reviews on teams and networks (Henttonen, 2010), corporate R&D, project organizations, innovative teams, students, and laboratory experiments constitute the substance of most knowledge and network-related studies. There is no academic reason for this: the omnipresence of knowledge work in a networked context creates interest in studying the everyday duties performed on an ongoing basis in a variety of industries. Our aim is to put the team phenomenon into an everyday context by analysing the interplay of knowledge creation and social networks in the performance of teams which function on a permanent basis. According to reviews of team studies, future directions in the research area should include the assessment of interdependency among team members (Paris, Salas, & Cannon-Bowers, 2000), the institutional factors of teams (Cohen and Bailey, 1997 and Guzzo and Dickson, 1996), and the different types of teams (Stock, 2004). This study aims to address some of the inadequacies identified by previous team research. The social network analysis employed in this study enables assessment of interdependence among team members as well as their contacts to the host organization, and teams studied here originate from a sample of different organizations from a variety of industries, both public and private. The study aims to find out how different processes of knowledge management and patterns of social networking affect team performance. The data consist of 76 teams (499 employees) from both the private and public sectors. First, the theories concerning knowledge management and networking in team settings are introduced. Then we describe the study setting and methodology. In the empirical part of our inquiry we contrast the knowledge-based and network-based explanations of team performance. To provide further validity to our examination, we included performance indices evaluated by both team members and the top management of the organizations (see Delarue, van Hootegem, Procter, & Burridge, 2008, for a review). In the concluding section, we assess the findings in relation to the practical developments of organizing work, as well as in the theoretical context of knowledge creation and networks.