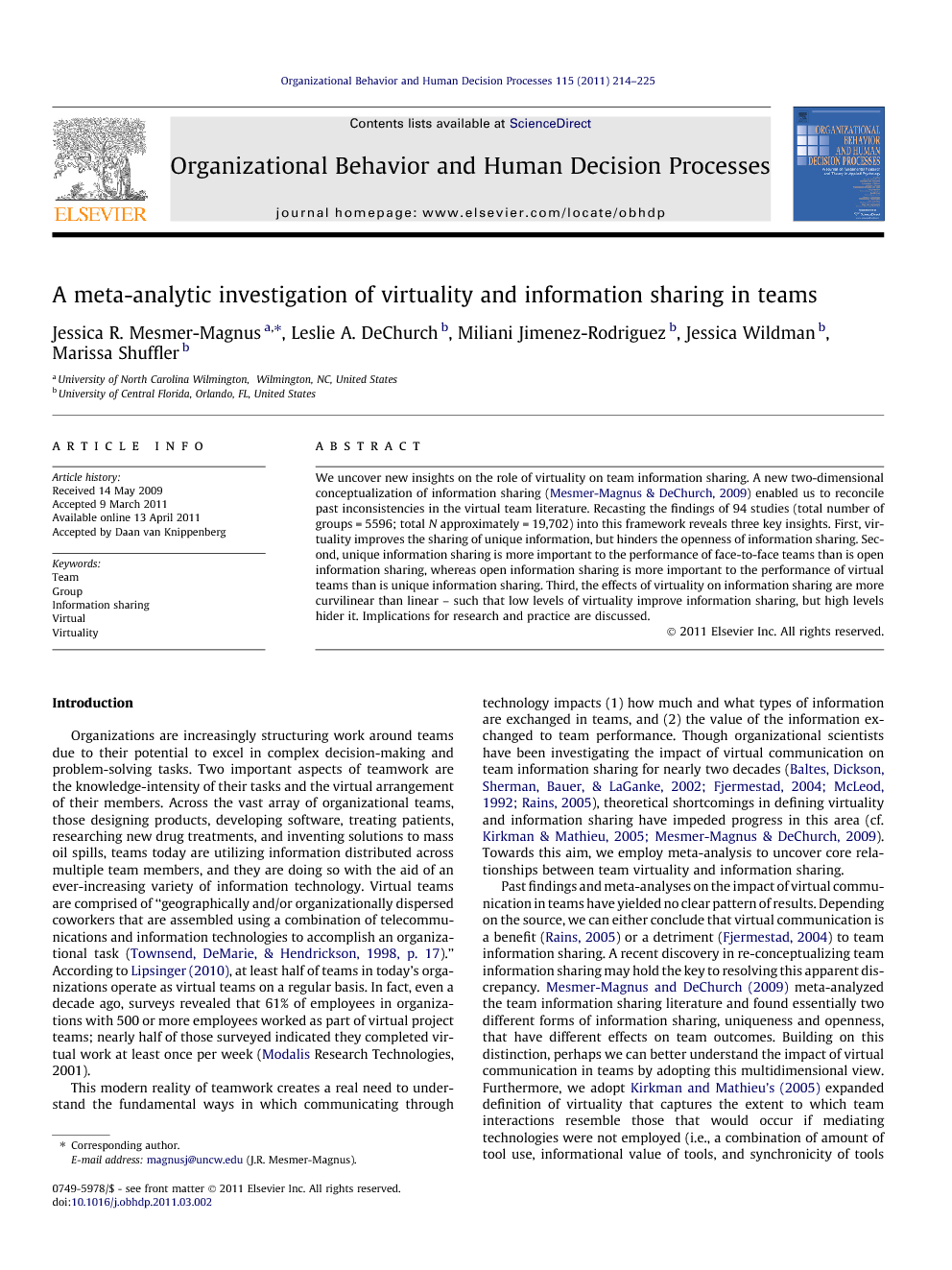 Organizations are increasingly structuring work around teams due to their potential to excel in complex decision-making and problem-solving tasks. Two important aspects of teamwork are the knowledge-intensity of their tasks and the virtual arrangement of their members. Across the vast array of organizational teams, those designing products, developing software, treating patients, researching new drug treatments, and inventing solutions to mass oil spills, teams today are utilizing information distributed across multiple team members, and they are doing so with the aid of an ever-increasing variety of information technology. Virtual teams are comprised of “geographically and/or organizationally dispersed coworkers that are assembled using a combination of telecommunications and information technologies to accomplish an organizational task (Townsend, DeMarie, & Hendrickson, 1998, p. 17).” According to Lipsinger (2010), at least half of teams in today’s organizations operate as virtual teams on a regular basis. In fact, even a decade ago, surveys revealed that 61% of employees in organizations with 500 or more employees worked as part of virtual project teams; nearly half of those surveyed indicated they completed virtual work at least once per week (Modalis Research Technologies, 2001). This modern reality of teamwork creates a real need to understand the fundamental ways in which communicating through technology impacts (1) how much and what types of information are exchanged in teams, and (2) the value of the information exchanged to team performance. Though organizational scientists have been investigating the impact of virtual communication on team information sharing for nearly two decades (Baltes et al., 2002, Fjermestad, 2004, McLeod, 1992 and Rains, 2005), theoretical shortcomings in defining virtuality and information sharing have impeded progress in this area (cf. Kirkman and Mathieu, 2005 and Mesmer-Magnus and DeChurch, 2009). Towards this aim, we employ meta-analysis to uncover core relationships between team virtuality and information sharing. Past findings and meta-analyses on the impact of virtual communication in teams have yielded no clear pattern of results. Depending on the source, we can either conclude that virtual communication is a benefit (Rains, 2005) or a detriment (Fjermestad, 2004) to team information sharing. A recent discovery in re-conceptualizing team information sharing may hold the key to resolving this apparent discrepancy. Mesmer-Magnus and DeChurch (2009) meta-analyzed the team information sharing literature and found essentially two different forms of information sharing, uniqueness and openness, that have different effects on team outcomes. Building on this distinction, perhaps we can better understand the impact of virtual communication in teams by adopting this multidimensional view. Furthermore, we adopt Kirkman and Mathieu’s (2005) expanded definition of virtuality that captures the extent to which team interactions resemble those that would occur if mediating technologies were not employed (i.e., a combination of amount of tool use, informational value of tools, and synchronicity of tools which may yield varying degrees of similarity/dissimilarity with face-to-face interactions). We utilize these expanded views of virtuality and information sharing to address two critical questions. First, to what extent does virtuality affect information sharing uniqueness and openness in teams? Second, do the effects of information sharing uniqueness and openness on team performance depend on the means through which information is transmitted?

Two decades ago, increased technology utilization prompted organizational researchers to systematically explore the impact of computer-mediated communication on information exchange in teams. A decade ago, it was proclaimed that virtual interactions were quickly becoming the norm in many organizations (Cramton, 2001). We submit that today, the fundamental issue for organizational scientists has changed. We no longer need to understand the impact of virtual communication in order to prefer one method to another, or even to prefer one method to another for certain types of communication at certain times, but rather, we need to understand these impacts so that we may ultimately understand how different subsets of team members can optimize communication flows through the variety of media-enabled virtual interactions they are already engaging in.