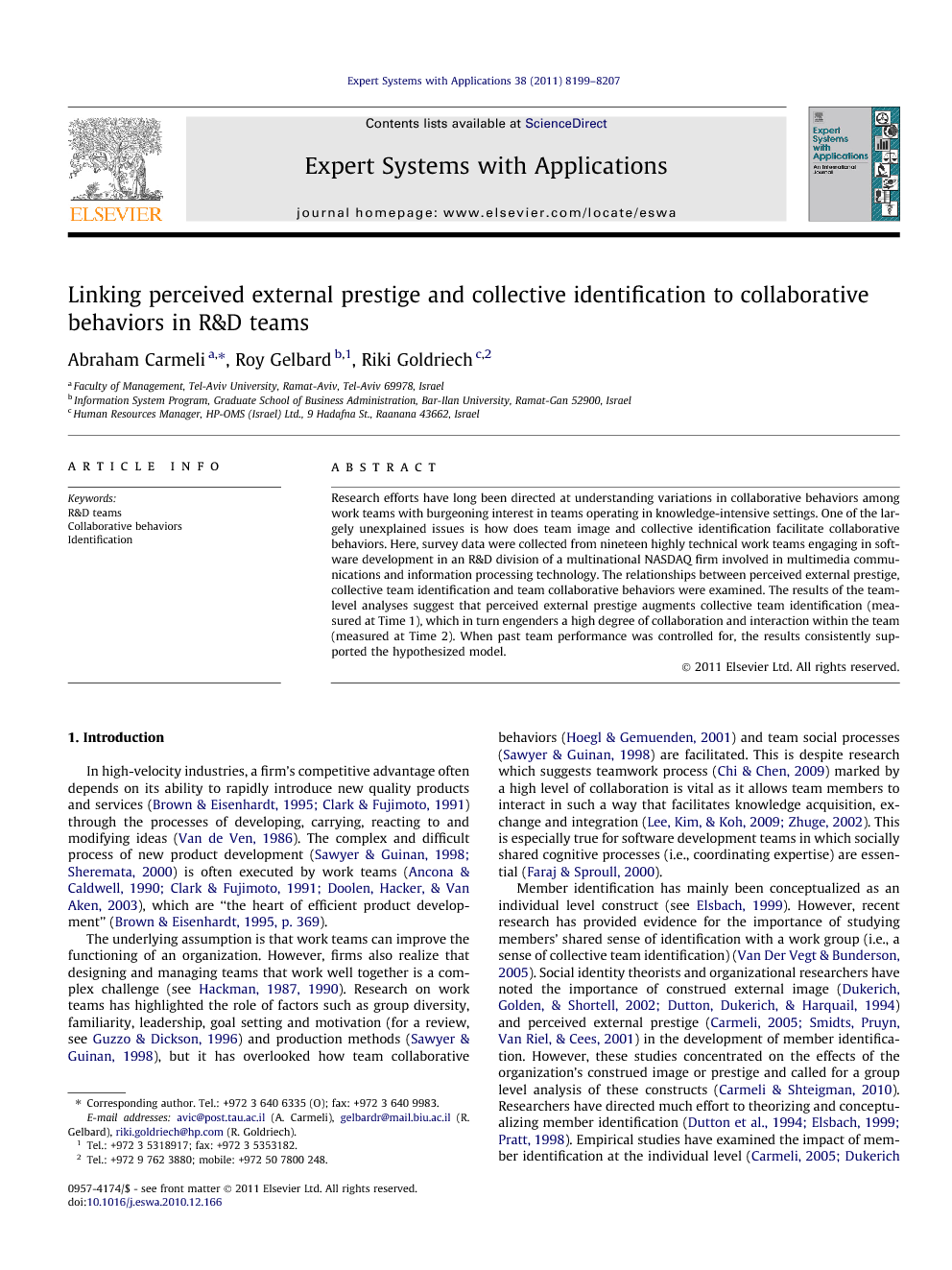 Research efforts have long been directed at understanding variations in collaborative behaviors among work teams with burgeoning interest in teams operating in knowledge-intensive settings. One of the largely unexplained issues is how does team image and collective identification facilitate collaborative behaviors. Here, survey data were collected from nineteen highly technical work teams engaging in software development in an R&D division of a multinational NASDAQ firm involved in multimedia communications and information processing technology. The relationships between perceived external prestige, collective team identification and team collaborative behaviors were examined. The results of the team-level analyses suggest that perceived external prestige augments collective team identification (measured at Time 1), which in turn engenders a high degree of collaboration and interaction within the team (measured at Time 2). When past team performance was controlled for, the results consistently supported the hypothesized model.

In high-velocity industries, a firm’s competitive advantage often depends on its ability to rapidly introduce new quality products and services (Brown and Eisenhardt, 1995 and Clark and Fujimoto, 1991) through the processes of developing, carrying, reacting to and modifying ideas (Van de Ven, 1986). The complex and difficult process of new product development (Sawyer and Guinan, 1998 and Sheremata, 2000) is often executed by work teams (Ancona and Caldwell, 1990, Clark and Fujimoto, 1991 and Doolen et al., 2003), which are “the heart of efficient product development” (Brown & Eisenhardt, 1995, p. 369). The underlying assumption is that work teams can improve the functioning of an organization. However, firms also realize that designing and managing teams that work well together is a complex challenge (see Hackman, 1987 and Hackman, 1990). Research on work teams has highlighted the role of factors such as group diversity, familiarity, leadership, goal setting and motivation (for a review, see Guzzo & Dickson, 1996) and production methods (Sawyer & Guinan, 1998), but it has overlooked how team collaborative behaviors (Hoegl & Gemuenden, 2001) and team social processes (Sawyer & Guinan, 1998) are facilitated. This is despite research which suggests teamwork process (Chi & Chen, 2009) marked by a high level of collaboration is vital as it allows team members to interact in such a way that facilitates knowledge acquisition, exchange and integration (Lee et al., 2009 and Zhuge, 2002). This is especially true for software development teams in which socially shared cognitive processes (i.e., coordinating expertise) are essential (Faraj & Sproull, 2000). Member identification has mainly been conceptualized as an individual level construct (see Elsbach, 1999). However, recent research has provided evidence for the importance of studying members’ shared sense of identification with a work group (i.e., a sense of collective team identification) (Van Der Vegt & Bunderson, 2005). Social identity theorists and organizational researchers have noted the importance of construed external image (Dukerich et al., 2002 and Dutton et al., 1994) and perceived external prestige (Carmeli, 2005 and Smidts et al., 2001) in the development of member identification. However, these studies concentrated on the effects of the organization’s construed image or prestige and called for a group level analysis of these constructs (Carmeli & Shteigman, 2010). Researchers have directed much effort to theorizing and conceptualizing member identification (Dutton et al., 1994, Elsbach, 1999 and Pratt, 1998). Empirical studies have examined the impact of member identification at the individual level (Carmeli, 2005 and Dukerich et al., 2002), but relatively little research has been done at the team level (Carmeli and Shteigman, 2010 and Dimmock et al., 2005). What follows is a study that attempts to theorize and empirically test how team perceived external prestige (the way team members think outsiders [i.e., other teams] view and evaluate their team) helps develop a sense of collective team identification and facilitates collaborative behaviors among R&D team members. Members are likely to develop a shared sense of identification with their work group when they believe outsiders (i.e., other teams in the same organization) favorably evaluate the work group to which they belong. We attempt to extend the Dukerich et al. (2002) model of member identification by (1) investigating the construct of perceived external prestige, which is distinct from the concept of construed external image; (2) applying a group level analysis rather than an individual level construct, and (3) examining how team collaborative behaviors are facilitated using a social identity approach. We argue that collective team identification is a prime motivational source for team members to interact and collaborate with one another and act as a team. We suggest a social identity process that facilitates the development of collective team identification and collaborative behaviors in the context of highly technical software product development teams working in R&D divisions of a multinational corporation that competes in a high-velocity arena.