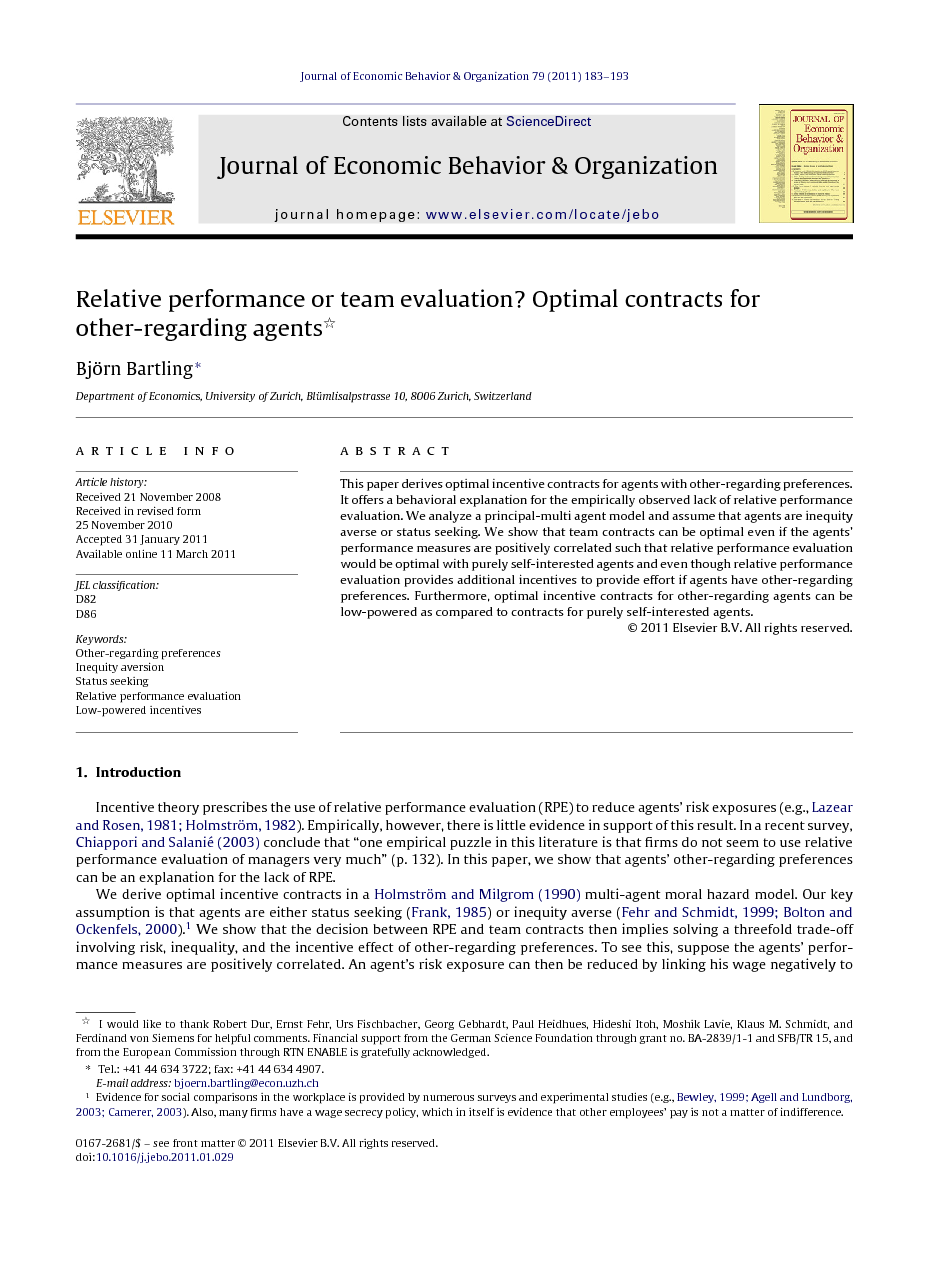 Incentive theory prescribes the use of relative performance evaluation (RPE) to reduce agents’ risk exposures (e.g., Lazear and Rosen, 1981 and Holmström, 1982). Empirically, however, there is little evidence in support of this result. In a recent survey, Chiappori and Salanié (2003) conclude that “one empirical puzzle in this literature is that firms do not seem to use relative performance evaluation of managers very much” (p. 132). In this paper, we show that agents’ other-regarding preferences can be an explanation for the lack of RPE. We derive optimal incentive contracts in a Holmström and Milgrom (1990) multi-agent moral hazard model. Our key assumption is that agents are either status seeking (Frank, 1985) or inequity averse (Fehr and Schmidt, 1999 and Bolton and Ockenfels, 2000).1 We show that the decision between RPE and team contracts then implies solving a threefold trade-off involving risk, inequality, and the incentive effect of other-regarding preferences. To see this, suppose the agents’ performance measures are positively correlated. An agent's risk exposure can then be reduced by linking his wage negatively to other agents’ measures (RPE). While this is optimal with purely self-interested agents, with other-regarding agents there are two additional effects. First, to reduce inequality, an agent's wage should depend positively on other agents’ measures (team contract). Second, other-regarding agents can have additional effort incentives, which are always positive with RPE but potentially negative with team contracts. Hence, to capitalize on these incentives, the principal should use RPE. We show that even though risk reduction and the incentive effect of other-regarding preferences drive contracts towards RPE, team contracts can nevertheless be optimal. The standard arguments against the use of RPE are sabotage and reduced incentives to cooperate (e.g., Lazear, 1989 and Itoh, 1991). Our paper complements these arguments and, in addition, it also applies in situations in which agents cannot affect each other's outcome by way of sabotage or helping. Furthermore, our paper provides a behavioral explanation why incentives are often weaker than predicted by standard moral hazard models (e.g., Williamson, 1985). Holmström and Milgrom (1990) argue that “it has been somewhat of a mystery to organizational observers, why there is so much less reliance on high-powered incentives than basic agency theory would suggest” (p. 93). In our model, given incentive levels cause higher risk exposure compared to the case with purely self-interested agents, and also exposure to inequality. Optimal incentive levels are therefore lower. This result does not only complement the standard multi-tasking argument for low-powered incentives (Holmström and Milgrom, 1991), but it also applies in single-tasking situations. With regard to incentive intensities there is evidence on international differences. Conyon and Murphy (2000) provide a comprehensive comparison of CEO pay practices in the US and UK and document that American CEOs face stronger incentives than British CEOs. Within the framework of standard agency theory, this observation could be explained by differences in risk aversion, effort costs, or performance measurement. The data, however, do not suggest such transatlantic differences. The authors therefore conclude that “the traditional principal-agent model […] does not offer promising explanations for the difference in pay levels and incentives in the two countries” (p. 664). They suggest “cultural differences” (p. 667) as an explanation: “The US, as a society, has historically been more tolerant of income inequality” (p. 667). Alesina et al., 2004, for example, provide evidence that Europeans are indeed more unhappy with inequality in society than Americans. Our paper shows that cultural and agency-theoretic explanations need not be distinct. Different incentive intensities in the US and UK may both reflect equilibrium incentive contracts that differ in the ‘cultural’ dimension of agents’ other-regarding preferences. Moreover, our results imply differences in the use of RPE between the US and UK (or comparable countries), but we are not aware of any empirical work that tested this implication so far. Our paper belongs to a strand of recent papers that analyze the effect of social comparisons in principal-multi agent models. Itoh (2004), Demougin and Fluet (2006), Demougin et al. (2006), and Neilson and Stowe (2010) assume risk neutral agents. In these papers, risk must thus not be traded off against inequality or incentives. Goel and Thakor (2006) and Bartling and von Siemens (2010a) consider risk averse agents. Goel and Thakor employ the first-order approach (Holmström, 1979) and show that envy can lead to low-powered team incentives. Their model is however restricted to envy, uncorrelated performance measures, and wage comparisons. We are, for example, able to analyze the role of effort costs for the sign of the incentive effect of other-regarding preferences. In their model the incentive effect is always positive, but we show that it can be negative if agents account for effort costs, especially under team contracts. Our paper identifies the conditions under which team contracts are nevertheless optimal. Bartling and von Siemens analyze the impact of envy in a Grossman and Hart (1983) moral hazard model. While this model frame is very general, e.g., it is not restricted to linear schemes, it comes at the cost that closed form solutions for optimal incentive contracts cannot be derived. The focus of their paper is the interplay of risk preferences and limited liability constraints on the principal's cost of providing incentives. They show that if and only if agents are risk averse and there are no binding limited liability constraints, then envy unambiguously increases the principal's cost of providing incentives. As Goel and Thakor, they restrict the analysis to the case with envious agents who do not account for effort costs in their comparisons. The remainder of the paper is organized as follows. Section 2 incorporates other-regarding preferences into a Holmström–Milgrom multi-agent moral hazard model. Section 3 derives the optimal incentive contracts. Section 4 concludes.

This paper proposes a behavioral explanation for the empirically observed lack of RPE. We analyze a principal-multi agent model and assume that the agents have other-regarding preferences that can take the form of inequity aversion or status preferences. We show that the principal's decision to offer a team or a RPE contract involves solving a threefold trade-off between risk, inequality, and the incentive effect of other-regarding preferences. The model shows that team contracts can be optimal even if the agents’ performance measures are positively correlated such that RPE is optimal with purely self-interested agents and even though the incentive effect of other-regarding preferences is always positive with RPE but can be negative with team contracts. Moreover, the model shows that optimal incentive contracts for other-regarding agents can be low-powered as compared to contracts for purely self-interested agents. This result can thus contribute to our understanding of why there is less reliance on explicit incentives than suggested by standard principal-agent models.