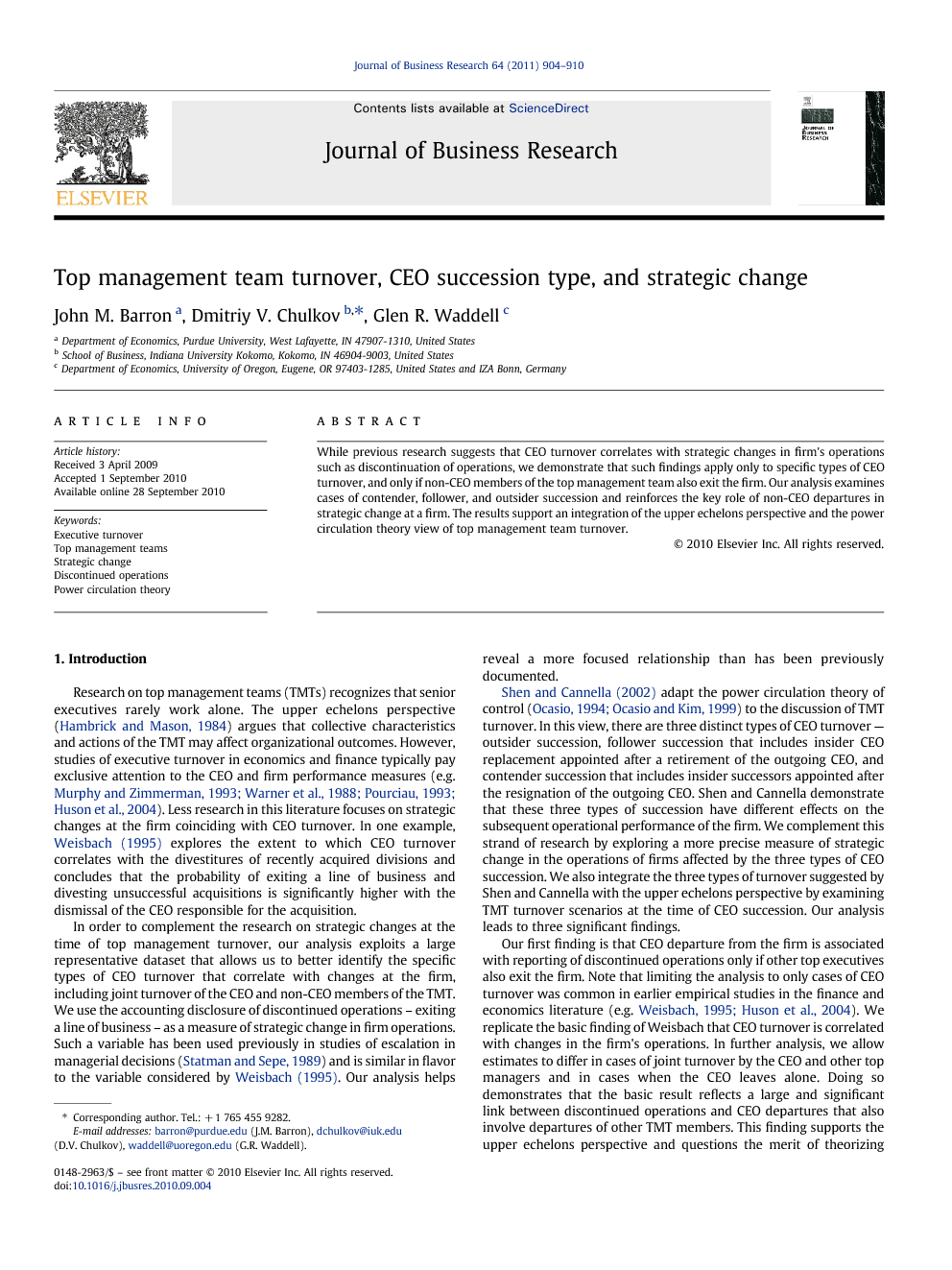 While previous research suggests that CEO turnover correlates with strategic changes in firm's operations such as discontinuation of operations, we demonstrate that such findings apply only to specific types of CEO turnover, and only if non-CEO members of the top management team also exit the firm. Our analysis examines cases of contender, follower, and outsider succession and reinforces the key role of non-CEO departures in strategic change at a firm. The results support an integration of the upper echelons perspective and the power circulation theory view of top management team turnover.

Research on top management teams (TMTs) recognizes that senior executives rarely work alone. The upper echelons perspective (Hambrick and Mason, 1984) argues that collective characteristics and actions of the TMT may affect organizational outcomes. However, studies of executive turnover in economics and finance typically pay exclusive attention to the CEO and firm performance measures (e.g. Murphy and Zimmerman, 1993, Warner et al., 1988, Pourciau, 1993 and Huson et al., 2004). Less research in this literature focuses on strategic changes at the firm coinciding with CEO turnover. In one example, Weisbach (1995) explores the extent to which CEO turnover correlates with the divestitures of recently acquired divisions and concludes that the probability of exiting a line of business and divesting unsuccessful acquisitions is significantly higher with the dismissal of the CEO responsible for the acquisition. In order to complement the research on strategic changes at the time of top management turnover, our analysis exploits a large representative dataset that allows us to better identify the specific types of CEO turnover that correlate with changes at the firm, including joint turnover of the CEO and non-CEO members of the TMT. We use the accounting disclosure of discontinued operations – exiting a line of business – as a measure of strategic change in firm operations. Such a variable has been used previously in studies of escalation in managerial decisions (Statman and Sepe, 1989) and is similar in flavor to the variable considered by Weisbach (1995). Our analysis helps reveal a more focused relationship than has been previously documented. Shen and Cannella (2002) adapt the power circulation theory of control (Ocasio, 1994 and Ocasio and Kim, 1999) to the discussion of TMT turnover. In this view, there are three distinct types of CEO turnover — outsider succession, follower succession that includes insider CEO replacement appointed after a retirement of the outgoing CEO, and contender succession that includes insider successors appointed after the resignation of the outgoing CEO. Shen and Cannella demonstrate that these three types of succession have different effects on the subsequent operational performance of the firm. We complement this strand of research by exploring a more precise measure of strategic change in the operations of firms affected by the three types of CEO succession. We also integrate the three types of turnover suggested by Shen and Cannella with the upper echelons perspective by examining TMT turnover scenarios at the time of CEO succession. Our analysis leads to three significant findings. Our first finding is that CEO departure from the firm is associated with reporting of discontinued operations only if other top executives also exit the firm. Note that limiting the analysis to only cases of CEO turnover was common in earlier empirical studies in the finance and economics literature (e.g. Weisbach, 1995 and Huson et al., 2004). We replicate the basic finding of Weisbach that CEO turnover is correlated with changes in the firm's operations. In further analysis, we allow estimates to differ in cases of joint turnover by the CEO and other top managers and in cases when the CEO leaves alone. Doing so demonstrates that the basic result reflects a large and significant link between discontinued operations and CEO departures that also involve departures of other TMT members. This finding supports the upper echelons perspective and questions the merit of theorizing about the events surrounding CEO turnover separately from those that relate to the turnover of other members of the TMT. Second, we find that a significant relationship between CEO turnover and discontinued operations exists in cases of contender succession, but not follower succession. This result supports the application of power circulation theory to the analysis of TMT turnover and suggests that contender succession and a mandate for strategic re-orientation of the firm coincide. Our third result is that in cases of outsider succession, a higher likelihood of discontinuing operations only occurs if outsider succession coincides with the departure of other TMT executives. In cases when outsider succession does not involve turnover in the TMT, or in cases when the outgoing CEO stayed with the firm in another capacity, we find no significant relationship. Karaevli (2007) summarizes conflicting findings of over fifty studies on outsider succession and recommends better measurement of turnover context. We complement the literature on outsider succession by demonstrating the need for integration of outsider succession studies with the upper echelons perspective. In our extensive sample, the apparent significant relationship between outsider succession and change at the firm is driven by the cases when outsider succession also involves departure of non-CEO top managers from the firm.

Changes in top management teams are important events for a firm. This research focuses on the correlation between different types of turnover in the TMT and strategic change at the firm measured by disclosures of discontinued operations. Using an extensive dataset, we are able to document that CEO turnover significantly increases the likelihood of new discontinued operations, but that this link is limited in three distinct ways. First, we find that discontinued operations are associated with a CEO departure only if at least one other TMT member leaves the firm with the CEO. This result demonstrates the importance of management teams in determining the firm's real investment strategy. Focusing solely on CEO turnover does not provide a complete view of strategic change at the firm. Second, we find a link with discontinued operations in cases of contender succession but not follower succession. This finding supports the power circulation theory and suggests that contender succession coincides with a mandate for strategic change. Our third result is that outsider succession is associated with new discontinued operations only if the prior CEO and prior members of the TMT leave the firm at the time of succession. Failing to distinguish cases of outsider succession that involve TMT turnover from cases that do not may provide for the conflicting results on the effects of the outsider succession discussed by Karaevli (2007). The implications of this study for future theoretical and empirical work on the link between turnover and changes in the firm's portfolio of operations include the idea that such work should not focus solely on the CEO. Integrating the upper echelons perspective with the power circulation theory view of CEO turnover will provide for a better understanding of the impact of changes in organizational leadership on the firm.