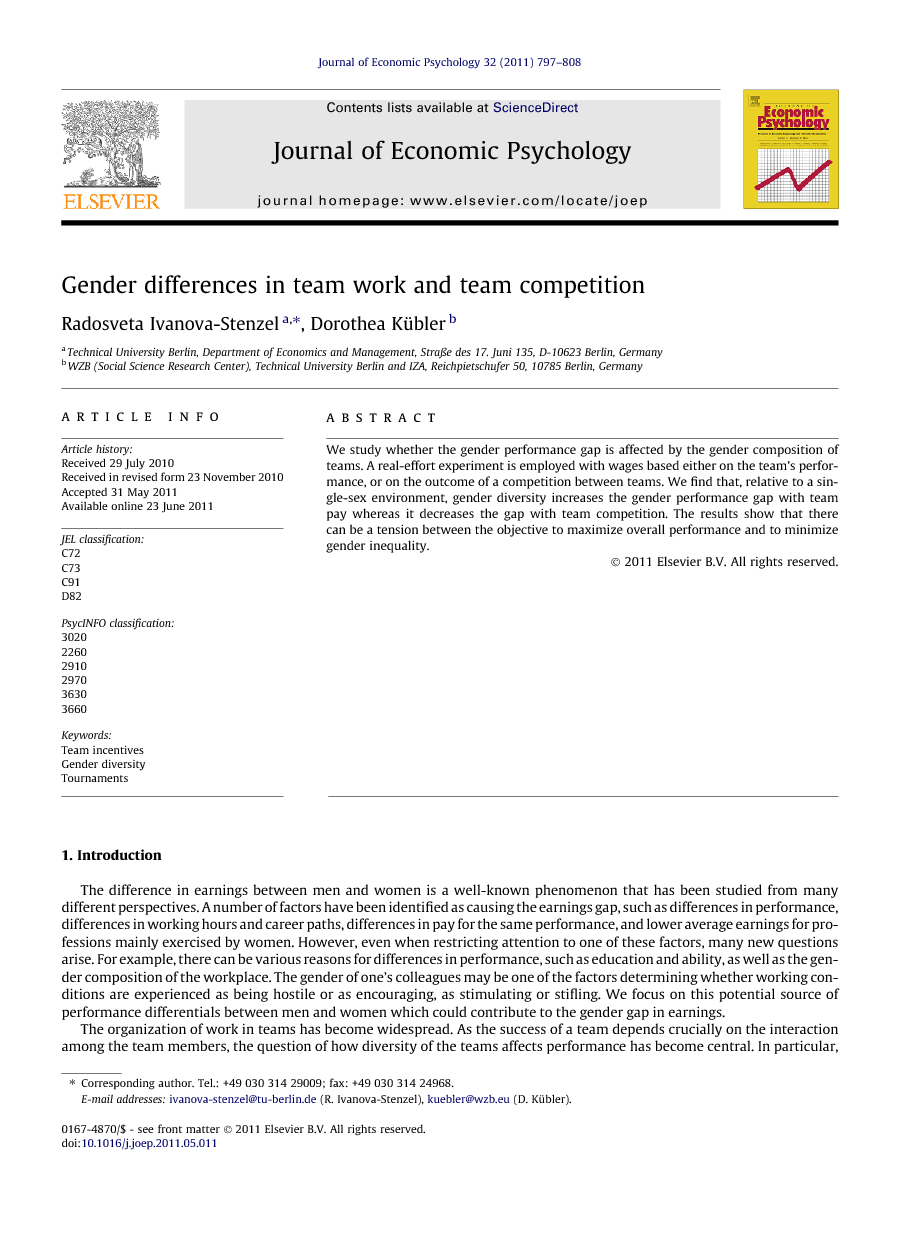 We study whether the gender performance gap is affected by the gender composition of teams. A real-effort experiment is employed with wages based either on the team’s performance, or on the outcome of a competition between teams. We find that, relative to a single-sex environment, gender diversity increases the gender performance gap with team pay whereas it decreases the gap with team competition. The results show that there can be a tension between the objective to maximize overall performance and to minimize gender inequality.

This paper reports on an experiment designed to study the relevance of gender for performance in team work. In two-person teams with non-interdependent tasks, we focus on gender differences with respect to the composition of a team under two different incentive schemes. Participants learned about the gender of the other players indirectly. This entails that they knew the gender composition of the own (and competing) teams for sure only in the single-sex teams. The results of the experiment suggest that the gender composition of the team accounts for gender differences in performance, both with team work and with team competition. In particular, the data reveal that the performance of men is significantly higher than the performance of women in revenue sharing with mixed teams and in team competition with male vs. male compared to female vs. female teams. Thus, the effect of gender diversity on the performance gap between men and women depends on the incentive scheme: compared to single-sex settings, gender diversity widens the performance gap with revenue sharing, but reduces it in team competition. We hypothesize that this is due to gender effects in the team environment interacting with differences in the competitiveness of men and women. In particular, gender stereotypes, salience of gender and gender differences with respect to competition can be seen as complementary to organizing the findings. Given our results, there is a conflict between the firm’s objective to maximize overall performance and the potential goal to increase gender equality.21 For example, in the case of revenue sharing, the difference between men and women is mainly due to increased effort by the men with mixed teams. In order to satisfy both objectives, competition between mixed teams emerges as a relatively good solution for a firm aiming at high performance levels but also at some degree of gender equality. It yields the maximum overall output and leads to a gender gap that is only slightly higher than the smallest observed gender gap with single-sex teams under revenue sharing. More evidence is needed to evaluate whether our findings can be generalized, for example, by employing other tasks, by increasing the team size, or by studying different cultures. We believe that the role of gender in team work has many more facets than the ones highlighted by our study. Our experiment should thus be seen as a first step towards a better understanding of gender effects in team work.