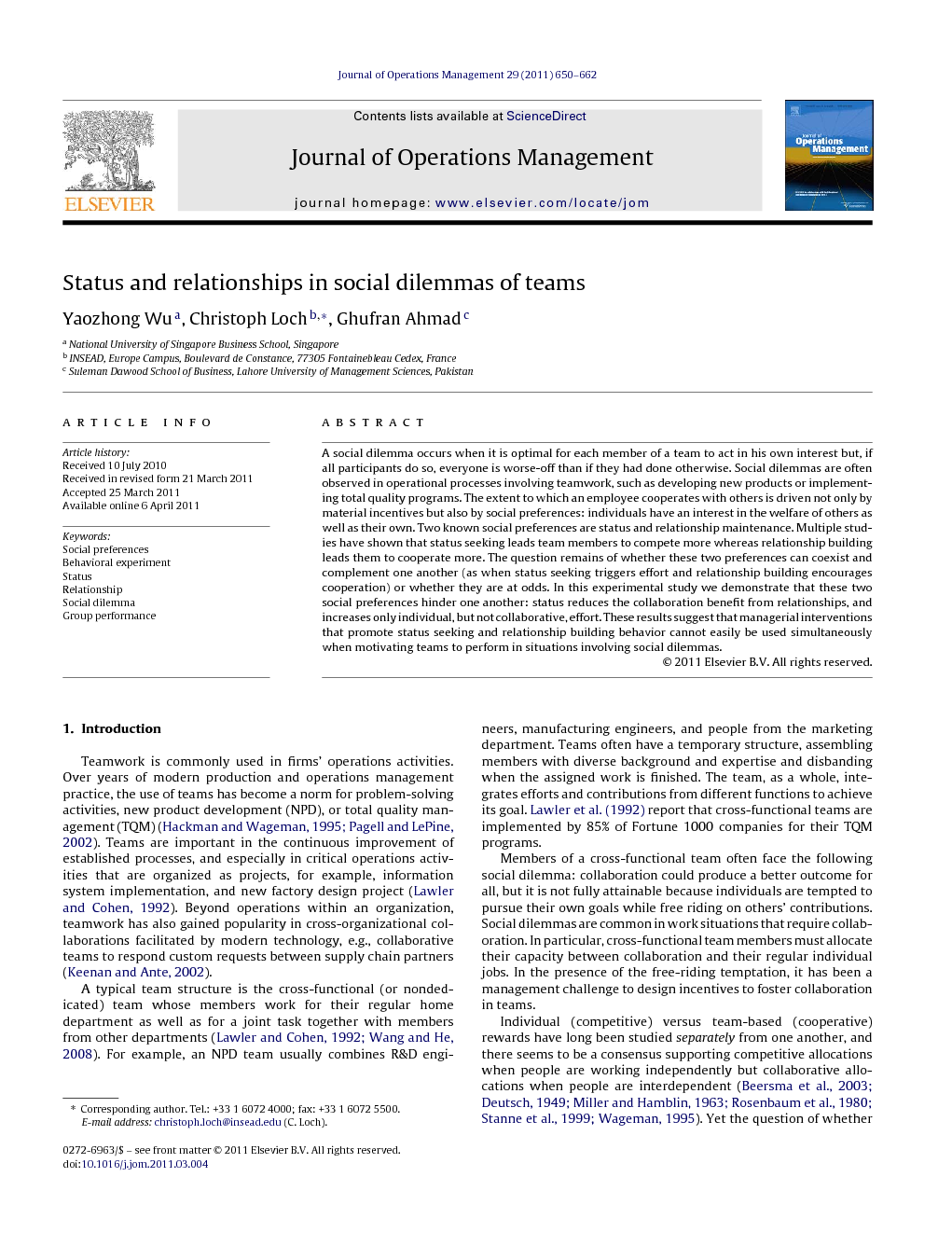 A social dilemma occurs when it is optimal for each member of a team to act in his own interest but, if all participants do so, everyone is worse-off than if they had done otherwise. Social dilemmas are often observed in operational processes involving teamwork, such as developing new products or implementing total quality programs. The extent to which an employee cooperates with others is driven not only by material incentives but also by social preferences: individuals have an interest in the welfare of others as well as their own. Two known social preferences are status and relationship maintenance. Multiple studies have shown that status seeking leads team members to compete more whereas relationship building leads them to cooperate more. The question remains of whether these two preferences can coexist and complement one another (as when status seeking triggers effort and relationship building encourages cooperation) or whether they are at odds. In this experimental study we demonstrate that these two social preferences hinder one another: status reduces the collaboration benefit from relationships, and increases only individual, but not collaborative, effort. These results suggest that managerial interventions that promote status seeking and relationship building behavior cannot easily be used simultaneously when motivating teams to perform in situations involving social dilemmas.

Teamwork is commonly used in firms’ operations activities. Over years of modern production and operations management practice, the use of teams has become a norm for problem-solving activities, new product development (NPD), or total quality management (TQM) (Hackman and Wageman, 1995 and Pagell and LePine, 2002). Teams are important in the continuous improvement of established processes, and especially in critical operations activities that are organized as projects, for example, information system implementation, and new factory design project (Lawler and Cohen, 1992). Beyond operations within an organization, teamwork has also gained popularity in cross-organizational collaborations facilitated by modern technology, e.g., collaborative teams to respond custom requests between supply chain partners (Keenan and Ante, 2002). A typical team structure is the cross-functional (or nondedicated) team whose members work for their regular home department as well as for a joint task together with members from other departments (Lawler and Cohen, 1992 and Wang and He, 2008). For example, an NPD team usually combines R&D engineers, manufacturing engineers, and people from the marketing department. Teams often have a temporary structure, assembling members with diverse background and expertise and disbanding when the assigned work is finished. The team, as a whole, integrates efforts and contributions from different functions to achieve its goal. Lawler et al. (1992) report that cross-functional teams are implemented by 85% of Fortune 1000 companies for their TQM programs. Members of a cross-functional team often face the following social dilemma: collaboration could produce a better outcome for all, but it is not fully attainable because individuals are tempted to pursue their own goals while free riding on others’ contributions. Social dilemmas are common in work situations that require collaboration. In particular, cross-functional team members must allocate their capacity between collaboration and their regular individual jobs. In the presence of the free-riding temptation, it has been a management challenge to design incentives to foster collaboration in teams. Individual (competitive) versus team-based (cooperative) rewards have long been studied separately from one another, and there seems to be a consensus supporting competitive allocations when people are working independently but collaborative allocations when people are interdependent ( Beersma et al., 2003, Deutsch, 1949, Miller and Hamblin, 1963, Rosenbaum et al., 1980, Stanne et al., 1999 and Wageman, 1995). Yet the question of whether individual and team-oriented rewards can be combined has not been answered. While a reward can be individual or team-oriented, it is not only formal (from incentives) but also informal (peer relationships, recognition of a relative social “status” rank for which people compete). An opportunity to play both motivational sides is widespread in operations—for example, in total quality management (TQM) and new product development (NPD) teams. Should the creation of improvement ideas be rewarded individually (e.g., through a bonus per idea, or recognition for individual ideas) or at the level of the team (e.g., a team bonus, or gratitude from peers)? This range of motivations is relevant in other functions, such as sales, where managers use status competition to elicit effort from sales representatives (Kalra and Shi, 2001) as well as collegial relationships to elicit collaboration (Jones et al., 2005). Could behavioral and informal rewards be used together to influence behavior? Or would they get in each other's way? We pose our research question more formally as follows: Can the nonmonetary behavioral rewards of status (individual) and positive relationship (group) act as complementary motivations – improving individual performance and group cooperation both – or would they have contradictory, self-canceling effects? In other words, should the manager who is attempting to motivate a team play both angles, competitive and collaborative, or will this backfire? Answers to these questions would make a contribution to reward theory by exploring the interaction effect of individual and team-oriented informal rewards in the context of behavioral operations management ( Bendoly et al., 2006, Bendoly et al., 2010 and Loch and Wu, 2007). Our study also contributes to the literature examining behavioral regularities that, in addition to team compensation, should be carefully managed (see Wang and He, 2008, and the references therein). We design a laboratory experiment with human subjects to answer our research question. Our experimental design recreates the typical structure of cross-functional teams in that the team members must balance the effort on their individual tasks and the effort devoted to teamwork. Our results suggest that combining status and relationship motivations risks backfiring and thus undermining both motivations. These results contribute to behavioral operations management by illuminating trade-offs between various “soft” managerial influence levers.