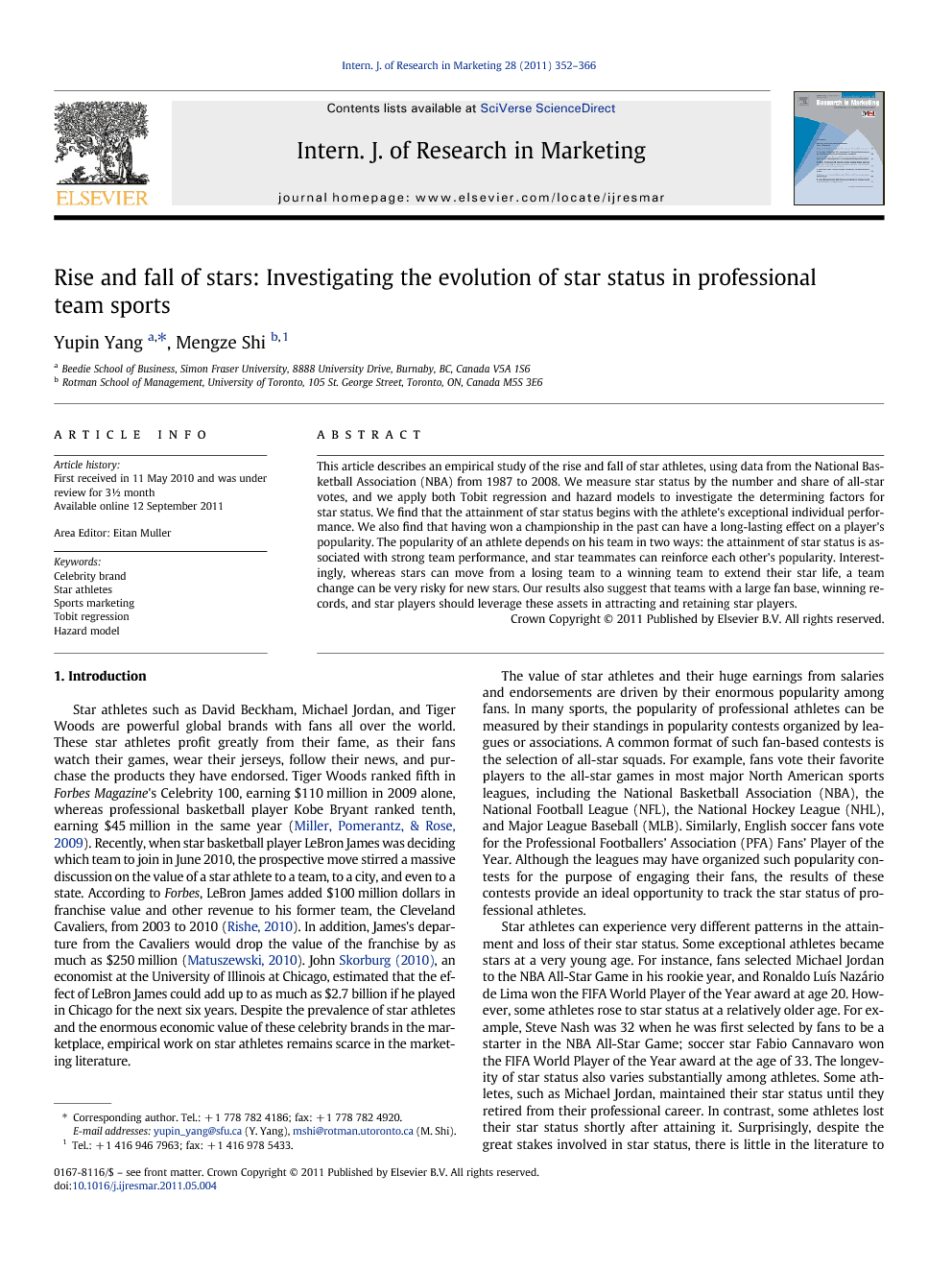 This article describes an empirical study of the rise and fall of star athletes, using data from the National Basketball Association (NBA) from 1987 to 2008. We measure star status by the number and share of all-star votes, and we apply both Tobit regression and hazard models to investigate the determining factors for star status. We find that the attainment of star status begins with the athlete's exceptional individual performance. We also find that having won a championship in the past can have a long-lasting effect on a player's popularity. The popularity of an athlete depends on his team in two ways: the attainment of star status is associated with strong team performance, and star teammates can reinforce each other's popularity. Interestingly, whereas stars can move from a losing team to a winning team to extend their star life, a team change can be very risky for new stars. Our results also suggest that teams with a large fan base, winning records, and star players should leverage these assets in attracting and retaining star players.

Star athletes such as David Beckham, Michael Jordan, and Tiger Woods are powerful global brands with fans all over the world. These star athletes profit greatly from their fame, as their fans watch their games, wear their jerseys, follow their news, and purchase the products they have endorsed. Tiger Woods ranked fifth in Forbes Magazine's Celebrity 100, earning $110 million in 2009 alone, whereas professional basketball player Kobe Bryant ranked tenth, earning $45 million in the same year (Miller, Pomerantz, & Rose, 2009). Recently, when star basketball player LeBron James was deciding which team to join in June 2010, the prospective move stirred a massive discussion on the value of a star athlete to a team, to a city, and even to a state. According to Forbes, LeBron James added $100 million dollars in franchise value and other revenue to his former team, the Cleveland Cavaliers, from 2003 to 2010 (Rishe, 2010). In addition, James's departure from the Cavaliers would drop the value of the franchise by as much as $250 million (Matuszewski, 2010). John Skorburg (2010), an economist at the University of Illinois at Chicago, estimated that the effect of LeBron James could add up to as much as $2.7 billion if he played in Chicago for the next six years. Despite the prevalence of star athletes and the enormous economic value of these celebrity brands in the marketplace, empirical work on star athletes remains scarce in the marketing literature. The value of star athletes and their huge earnings from salaries and endorsements are driven by their enormous popularity among fans. In many sports, the popularity of professional athletes can be measured by their standings in popularity contests organized by leagues or associations. A common format of such fan-based contests is the selection of all-star squads. For example, fans vote their favorite players to the all-star games in most major North American sports leagues, including the National Basketball Association (NBA), the National Football League (NFL), the National Hockey League (NHL), and Major League Baseball (MLB). Similarly, English soccer fans vote for the Professional Footballers’ Association (PFA) Fans’ Player of the Year. Although the leagues may have organized such popularity contests for the purpose of engaging their fans, the results of these contests provide an ideal opportunity to track the star status of professional athletes. Star athletes can experience very different patterns in the attainment and loss of their star status. Some exceptional athletes became stars at a very young age. For instance, fans selected Michael Jordan to the NBA All-Star Game in his rookie year, and Ronaldo Luís Nazário de Lima won the FIFA World Player of the Year award at age 20. However, some athletes rose to star status at a relatively older age. For example, Steve Nash was 32 when he was first selected by fans to be a starter in the NBA All-Star Game; soccer star Fabio Cannavaro won the FIFA World Player of the Year award at the age of 33. The longevity of star status also varies substantially among athletes. Some athletes, such as Michael Jordan, maintained their star status until they retired from their professional career. In contrast, some athletes lost their star status shortly after attaining it. Surprisingly, despite the great stakes involved in star status, there is little in the literature to indicate what has contributed to these variations in both the attainment and the retention of star status. In this article, we empirically investigate the factors associated with the rise and fall of star athletes, using all-star voting data from the NBA. Although we examine professional athletes in the NBA only, the findings can be extended to other professional team sports such as soccer, football, hockey, and rugby, as the factors we examine are common in these professional team sports as well. To the best of our knowledge, this paper is the first to empirically study the dynamics of star status for professional athletes and to quantify the impact of the associating factors on the dynamic process. We find that the rise of a star athlete is accompanied by exceptional individual performance statistics. We also find that both being in a good team and having star teammates help. First, individual athletes in professional team sports cannot win by themselves. Star athletes need good teammates to win games, and both winning games and championships are critical to the attainment and retention of star status. Our results show that a winning team can help its players gain popularity, whereas a losing team will accelerate the fall of its star players. This finding of the team's impact on the rise and fall of athlete stars is consistent with the idea of viewing the team–athlete relationship as a brand alliance (Yang, Shi, & Goldfarb, 2009). Our results may explain why stars in losing teams often leave their teams. For example, basketball star Kevin Garnett left the Minnesota Timberwolves for the Boston Celtics and extended his star life by means of winning games and championships. Interestingly, although it is beneficial for an established star to change from a losing team to a winning team, such a move can be risky for a new star. Our results show that changing teams can accelerate the fall of a new star. Second, our results show that having star teammates can strengthen an athlete's popularity. It has become common for stars to join each other to form a star team. For instance, soccer star David Beckham joined stars Zinedine Zidane and Luís Figo in Real Madrid to form a star-studded team in 2003. More recently, basketball star LeBron James joined stars Dwyane Wade and Chris Bosh in Miami in July 2010. The move provides James with not only a better chance to win championships but also two star teammates to enhance his popularity. The rest of this paper is organized as follows. In Section 2, we review the related marketing literature. We then describe the NBA background and our data in Section 3. We develop our empirical models in Section 4 and present the results in Section 5. We conclude the paper with a discussion of our findings and the implications in Section 6.

6.1. Summary and managerial implications Our results on the evolution of star status have useful implications for star athletes, team managers, and corporations that endorse professional athletes. Unlike most product brands, which are managed through such marketing mix variables as advertising and pricing (Keller, 2003 and Shankar et al., 2008), professional athletes manage their personal brands by improving individual performance, choosing the right teams, and joining the right teammates. Our results imply that athletes should focus on different factors as their star status evolves during their professional careers. First, individual performance is more important during the stage of attaining star status than during the stage of retaining it, especially among All-Star Starters. Our results demonstrate that the rise of a star is accompanied by exceptional individual performance statistics. This finding implies that a young athlete with star aspirations should select a team that can give him an opportunity to achieve outstanding individual performance statistics in the early stage of his career. However, after a player has become a star and shifts his attention to retaining his status, our results show that his individual performance is not as important as before. At this stage, the star should focus on leading his team to achieving better performance or to winning a championship. Note that for star athletes selected for all-star reserves, our results suggest that these athletes should continue improving their individual performance statistics to retain their star status. Unlike those stars who are selected according to their popularity, these stars are selected primarily on the basis of their excellent individual performances. Second, a star should play for a winning team. An athlete is merely a component of a team, and the popularity of an athlete is thus strongly associated with the popularity of his team. Our results indicate that playing for a winning team not only helps an athlete rise up to being a star but also helps him extend his star lifespan. This may explain why stars often switch to teams with better records, despite the possibility of losing popularity as a result of the team change. However, our results also indicate that a star, especially All-Star Starters, should use caution in considering a team change during the early years of his star life, as new stars are very vulnerable to team changes. For star athletes selected as all-star reserves, playing for a winning team is also beneficial for attaining and maintaining all-star status. Third, star teammates can help each other. Our results show that an athlete's popularity is strongly associated with his teammates’ popularity, and stars can actually reinforce each other's popularity. This may explain some blockbuster deals in recent years that have brought stars together to form star teams. Stars (e.g., LeBron James) often claim that the sole purpose of joining other stars (e.g., Dwyane Wade) is to win championships. Our results also show that in addition to fulfilling their professional dreams, winning championships can have a significant and positive effect on the longevity of stars. For athletes aspiring to be stars, winning a championship can accelerate the process. This may explain why Chris Bosh, an all-star reserve player, left Toronto for Miami to join stars with whom he could win the championships and fame. However, our results also imply that this can be a risky move, as stars like Chris Bosh could be eclipsed by more popular star teammates and eventually lose star status. Our results can also be useful to managers of professional sports teams in managing their star athletes. Teams may leverage their assets such as a large fan base, current star players, and a winning record in attracting and/or retaining a star player. If a team intends to develop a new star, the team should build up the player's individual performance statistics by providing him with more support and playing time. Our results can also be useful to corporations such as Nike and Adidas, who employ star athletes as endorsers of their brands. By knowing the evolution patterns of athletes and the impacts of surrounding factors, corporate brands can make better informed decisions regarding which athlete to sign and what endorsement contracts to offer. 6.2. Limitations and directions for further research As a limitation of this paper, neither the Tobit regression models nor the hazard models can confirm a cause-and-effect relationship between the factors studied and athlete popularity measured by star status. Future research may use experimental studies to establish such cause-and-effect relationships. Another limitation of this paper is that some potentially important factors affecting athlete popularity are missing. For example, in modeling the evolution of athlete popularity, we do not consider the effect of corporate endorsements. Athletes often endorse many products such as shoes, watches, food, clothing, and wireless service carriers. These endorsements may in turn influence the athletes’ popularity. Future research may study the relationship between endorsements and athlete popularity (Elberse & Verleun, 2010).