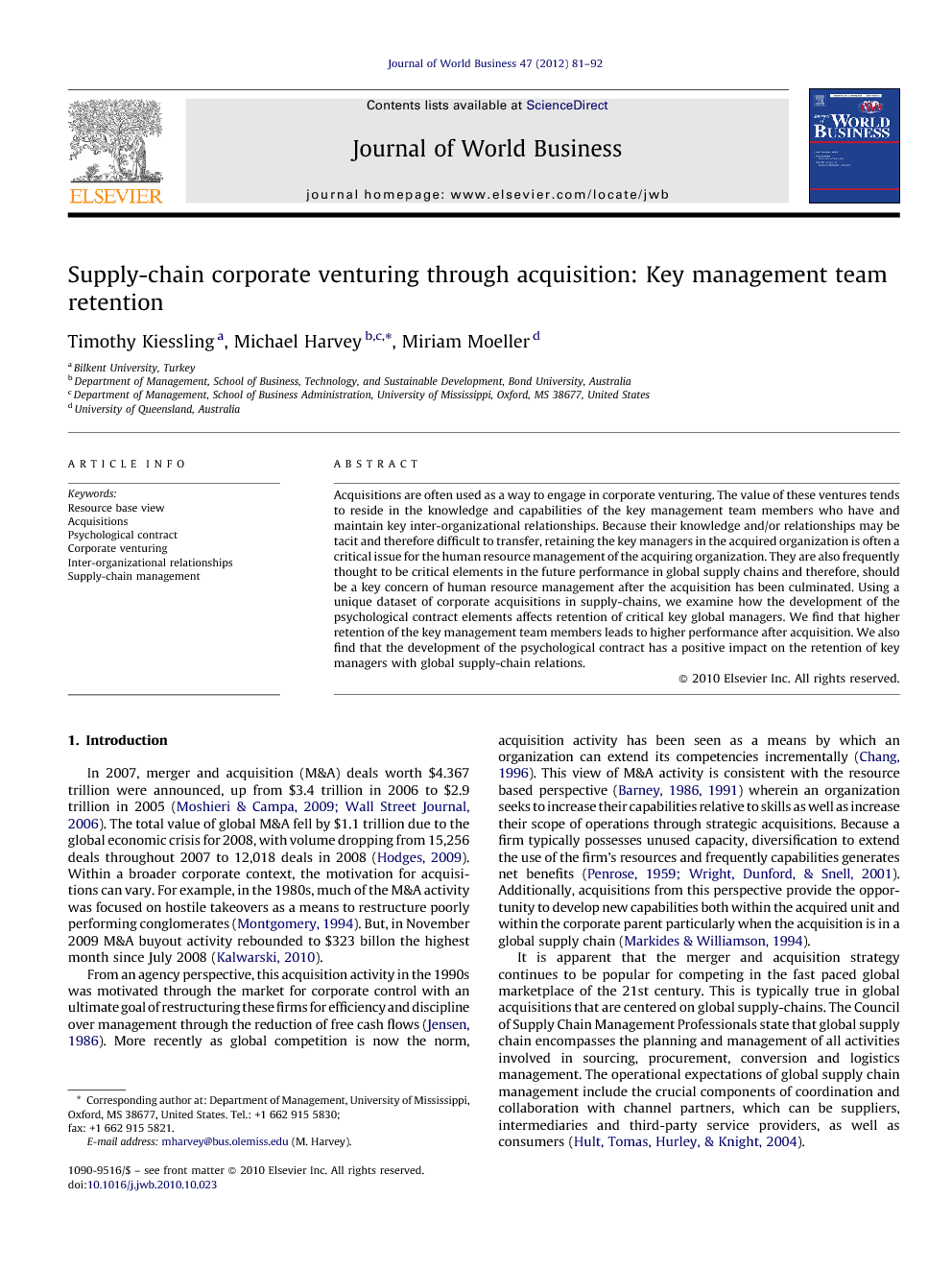 Acquisitions are often used as a way to engage in corporate venturing. The value of these ventures tends to reside in the knowledge and capabilities of the key management team members who have and maintain key inter-organizational relationships. Because their knowledge and/or relationships may be tacit and therefore difficult to transfer, retaining the key managers in the acquired organization is often a critical issue for the human resource management of the acquiring organization. They are also frequently thought to be critical elements in the future performance in global supply chains and therefore, should be a key concern of human resource management after the acquisition has been culminated. Using a unique dataset of corporate acquisitions in supply-chains, we examine how the development of the psychological contract elements affects retention of critical key global managers. We find that higher retention of the key management team members leads to higher performance after acquisition. We also find that the development of the psychological contract has a positive impact on the retention of key managers with global supply-chain relations.

Acquisitions continue to be an important activity in the 21st century. Although they may serve an important function within a corporate venturing context, the ability to derive value from these acquisitions is often dependent on retaining the human capital of the key supply-chain management team. However, scholars are beginning to recognize the difficulty of realizing value when it is embedded in human assets (Coff, 1997). These actors are not constrained by organizational boundaries and care must be taken to gain their confidence and support after their organization is acquired. Our analysis reveals that development of the psychological contract in terms of establishing mutual understanding concerning expected roles and responsibilities as well as expectations concerning roles and responsibilities for dealing with unexpected events facing the organization aids in retention after the acquisition. This seems rather intuitive but is important for extending our understanding of acquisition performance from a resource based view. Whereas most research examining post-acquisition performance has focused on corporate parent performance, we have focused on the perceived performance of the acquired organization. We have done this since our focus has been on the key management team of the acquired unit. Although perceptual measures suffer from limitations, the ability to obtain objective verifiable performance data is virtually impossible. In our study we found that greater retention is associated with superior performance within the business after acquisition. This too is rather intuitive especially since the majority of the acquisitions under consideration are much smaller than the mega-deals discussed in the public arena. Indeed, we find that larger relative acquisitions in our sample perform worse overall when retention is entered into the regression equation which would indicate potential problems with integrative efforts. We find that the relative size of the acquisition is also negatively related to the development of the psychological contract in support of this view. Importantly, we find that market turbulence is positively related to the development of the psychological contract as hypothesized. Again, we believe that this is rather intuitive since environmental dynamism enhances the value of the key personnel inter-organization knowledge base and relationships. If this knowledge and personal contacts are resident in the human assets (e.g., key inter-organizational managers), then it makes sense that the acquiring organization would seek to establish the psychological contract as soon as possible as a means to retain the key management team with the inter-organizational contacts (Anderson and Narus, 1996, Hunt and Morgan, 1994 and Palmatier et al., 2006). We believe that an excellent opportunity exists to examine how the psychological contract affects spun-off units. Although spin-offs typically aid the corporation casting-off the business (Markides, 1992), the performance of the organizations spun-off is less clear (Daley, Mehrotra, & Sviakuma, 1997). Indeed, Woo, Willard, and Daellenbach (1992) find no improved performance among spin-offs in terms of ROA, market to book, or sales growth. We suspect that in many cases the psychological contract may have already been violated for those spun off units particularly if the corporate parent has experienced performance problems before the spinoff. Examining retention after spinoffs is thus an interesting area of focus and may allow for the collection of verifiable performance data although perceptual data would still be needed to measure psychological contract perceptions. The theoretical contribution of this research has implications for both the resource based view and the literature on psychological contracts. The dominant theoretical foundation for acquisitions was either agency theory where top managers were purchasing other firms as a portfolio to hedge their risk, or the market for corporate control where firms were seeking underperforming firms and after purchase replacing the KMT with their own managers. Both of these theories do continue to have explanatory power, but RBV is now becoming validated through research and the rare, valuable and inimitable assets in the “black box” of a firm are being explored. In a global supply chain where a successful firm is purchased for their competencies, the KMT will need to be retained to assist in leveraging of competencies. As the resource based view focuses on assets that are inimitable, acquisition may be the only alternative and the success in retaining the KMT will be a key factor. This research also extends the psychological contract literature building on both the normative contracting literature in regard to supply chain relationships and psychological contracts. We have combined both streams of literature to explain the successful retention of the KMT after acquisition. The importance of retaining the KMT through the development of psychological contracts is apparent as post-acquisition performance is greater when retention of the KMT occurs. 4.1. Managerial relevance This research has many lessons for practitioners in regard to the global supply chain KMT, acquisitions, and the process of acquiring. Although many firms continue to outsource, many other firms are still involved in acquiring firms within their global supply chain to leverage competencies and acquire new ones that may be country specific, product specific, necessary for control purposes, etc. Our research suggests that due to the KMT's role based on obtaining and coordinating resources, developing and implementing strategy, and the development of internal and external knowledge and networks, the KMT should be retained. This viewpoint is from the resource based view that the reason for the acquisition is to acquire rare, valuable and inimitable resources. Past research suggests that often top managers leave the firm after acquisition because the psychological contract that was developed before acquisition between the KMT and firm is not transferable to the acquiring firm. There are several major implications to practitioners from our research. The KMT may not be motivated to remain after acquisition only by new monetary contracts but by the relationship development that is necessary for a psychological contract to be effective, which becomes more daunting depending upon the global nature of the supply chain and the local culture. As such, the development of the psychological contract should be initiated early in the acquisition process.