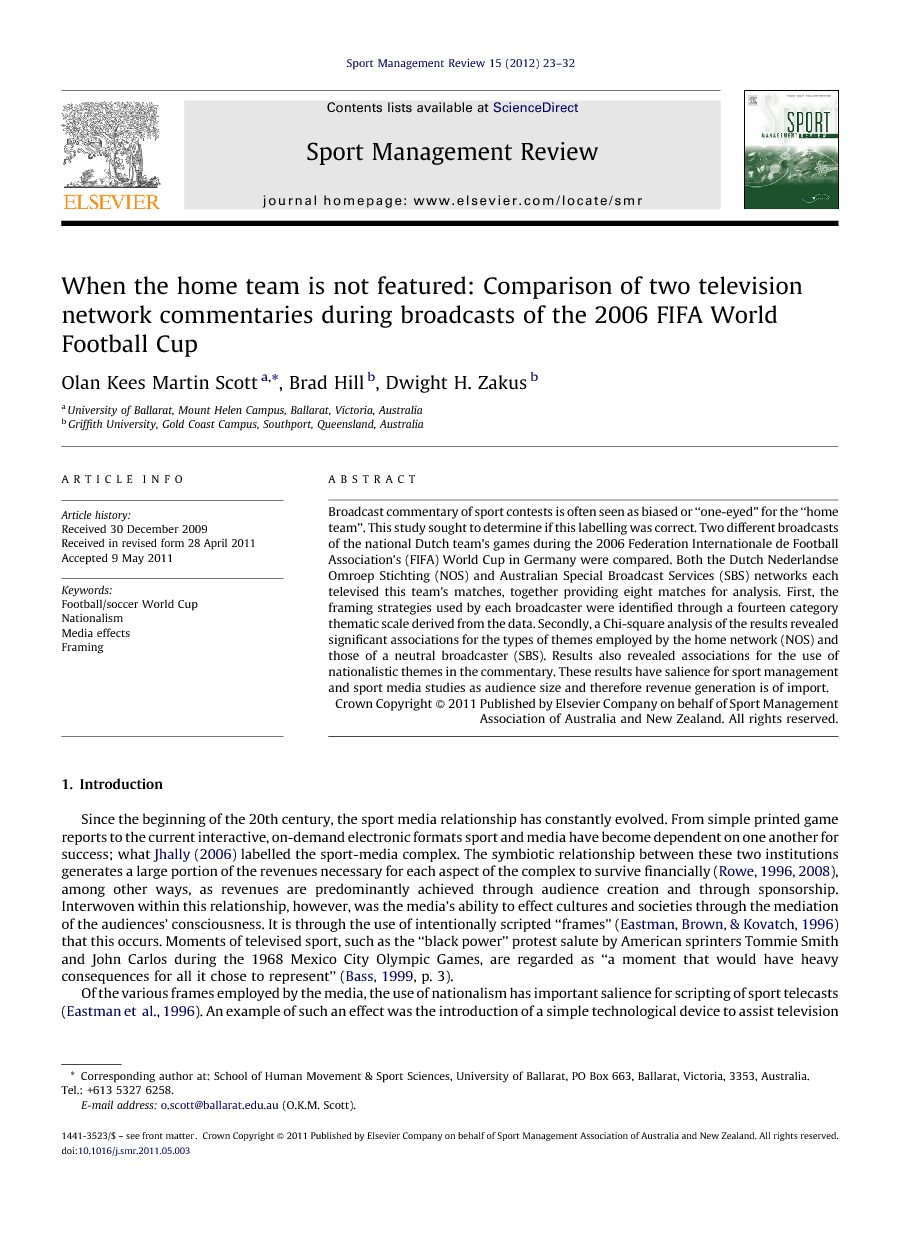 Broadcast commentary of sport contests is often seen as biased or “one-eyed” for the “home team”. This study sought to determine if this labelling was correct. Two different broadcasts of the national Dutch team's games during the 2006 Federation Internationale de Football Association's (FIFA) World Cup in Germany were compared. Both the Dutch Nederlandse Omroep Stichting (NOS) and Australian Special Broadcast Services (SBS) networks each televised this team's matches, together providing eight matches for analysis. First, the framing strategies used by each broadcaster were identified through a fourteen category thematic scale derived from the data. Secondly, a Chi-square analysis of the results revealed significant associations for the types of themes employed by the home network (NOS) and those of a neutral broadcaster (SBS). Results also revealed associations for the use of nationalistic themes in the commentary. These results have salience for sport management and sport media studies as audience size and therefore revenue generation is of import.

Since the beginning of the 20th century, the sport media relationship has constantly evolved. From simple printed game reports to the current interactive, on-demand electronic formats sport and media have become dependent on one another for success; what Jhally (2006) labelled the sport-media complex. The symbiotic relationship between these two institutions generates a large portion of the revenues necessary for each aspect of the complex to survive financially (Rowe, 1996 and Rowe, 2008), among other ways, as revenues are predominantly achieved through audience creation and through sponsorship. Interwoven within this relationship, however, was the media's ability to effect cultures and societies through the mediation of the audiences’ consciousness. It is through the use of intentionally scripted “frames” (Eastman, Brown, & Kovatch, 1996) that this occurs. Moments of televised sport, such as the “black power” protest salute by American sprinters Tommie Smith and John Carlos during the 1968 Mexico City Olympic Games, are regarded as “a moment that would have heavy consequences for all it chose to represent” (Bass, 1999, p. 3). Of the various frames employed by the media, the use of nationalism has important salience for scripting of sport telecasts (Eastman et al., 1996). An example of such an effect was the introduction of a simple technological device to assist television audiences to follow the movement of the ice hockey puck when the National Hockey League (NHL) sought to extend its audience in the United States of America (USA). This adaptation was never considered beyond what the actual device intended to accomplish. Popular media discourses framed this device as a further Americanization of Canada, or at least of Canada's national sport, leading to an overwhelming negative response by Canadian media networks and television audiences (Mason, 2002). Occurrences such as the black power salute and the Americanization of Canada have led to an increased scrutiny of the cultural influence of broadcast sport events on different national television audiences. This is most evident in broadcasts of sport mega-events; in particular, the Olympic Games, Commonwealth Games, and World Championships for many sports (e.g., for soccer, athletics, rugby, etc.). After the Olympic Games the Fédération Internationale de Football Association (FIFA) World Cup is the largest global sport event with a total cumulative television audience of approximately 26 billion reported for the three previous tournaments (1998, 2002, and 2006) (Federation Internationale de Football Association [FIFA], 2006). FIFA also reported that the 2006 World Cup held in Germany had the most extensive television broadcast reach with 376 television channels broadcasting to 214 countries generating 73,072 h of total broadcast time. The audience size and the reach of this event, again, provide a basis to understand how broadcasts do or do not embrace nationalism among other themes. Media productions seek to generate and capture large audiences, while having a strong cross-cultural impact on viewers; a point that Whannel (2000) encourages for further study. A production tactic used by broadcast networks is to script commentator dialogue (Eastman et al., 1996). Scripting of broadcast commentary has led Rowe (2004) to state that the game is more than simply “sight and sound” (p. 172). Thus, television broadcasters impart commentators to focus their discourse on (often) pre-programmed scripts and ensuring these scripts are meaningful to television viewers (Silk, 1999). Billings and Tambosi (2004) also noted that dialogue used by commentators can “culturally influence” (p. 163) or bias viewer perceptions of matches, players, coaches, and spectators of competing nations making “the game being played not always the game that is described on network television” (p. 164). The ability of commentators to culturally influence perceptions of television audiences is related to embedding of framed themes into network broadcasts scripts that often include topics that appeal and seek to maintain viewer interest. A key theme typically employed by networks was the ideological use of nationalism (Guo et al., 2007 and L’Etang, 2006). The use of nationalism in media broadcasts allowed networks to connect with audiences through dialogue that promotes a viewer's home nation. The use of scripted dialogue in commentary of mega-events using nationalism to capture television audiences was logical as networks typically focus broadcasts on aspects of an event that involved their home country (Larson & Rivenburgh, 1991). Through their participation in the Olympic Games numerous countries obtained abundant “home country” content that is used to align sport competitions to their respective national audiences. Yet, as a global media mega-event, the format of the FIFA World Football Cup is limited in terms of the number of participating nations; only 32 nations compete in this event. As a result, many networks holding national broadcast rights do not have home country content to telecast. Even so, these networks still have to generate television audiences to obtain revenues to cover costs of their broadcast fees, production, and to enhance their own investments. Such restrictions on “home team” content demands that many networks have to differently frame their broadcasts to generate audiences. This study sought to understand how two national television networks framed their broadcasts of the Netherlands’ 2006 World Cup matches to their respective home audiences; particularly, in this case, when one network's broadcasts did not involve their own national team. While understanding how broadcast content is scripted is worthy of study in its own right, this study included a focus on: how broadcasts not including a “home team”, thereby reducing the use of nationalistic themes, were scripted; how thematic cross-cultural mapping occurs; and whether or not scripts served a purpose in such broadcasts. This study examined all of the games of the 2006 World Cup that the Netherlands played, cataloguing and contrasting the discourses used by two television networks broadcasting these same matches to their respective nations. Differences in discourse by Netherlands’ NOS and Australia's SBS television networks allowed nationalistic biases to be identified. In addition, quantitative comparisons were made both within and between broadcasters, allowing for cross-cultural and linguistic differences to be revealed.

Significant associations found in the use of these particular types of nationalistic themes used by each network suggested that commentator discourse used in framing strategies were adopted to culturally appeal to television viewers to influence their decision to continue to watch. Nationalistic themes of the Dutch team's work ethic, patriotic appeals, and Us/We versus “Them” themes were used by NOS. Taken together, inspection of the language contained within these themes appeared to reinforce expectations and stereotypes of the television audience. On the other hand, SBS used nationalistic themes of Dutch history and ritualistic celebration. Examination of the language used in these themes indicated they were of an educational, informative, and emotional nature; therefore suggesting SBS commentators may have been promoting an enculturation of football to Australian television viewers. Thus, support was found for Hypothesis 6 that use of themes in commentator discourse has the potential to culturally influence viewers’ perceptions. However, the commentator influence appeared to be different between the networks. Overall, results revealed differing significant associations for scripting and framing commentator discourse in broadcasts of matches featuring the home team and those that did not. Of particular interest was the use of nationalistic themes by broadcasters to capture, build, and maintain viewers to achieve what is a key aspect of the sport/media nexus; i.e., to generate audience size and therefore revenues for sport organisations and the media. The use of nationalistic themes in NOS commentary was anticipated as networks must frame commentary to meet expectations of their audiences in order to maintain their interest in broadcasts. Data suggested networks broadcasting home country content often employ nationalistic themes depicting work ethos, patriotic appeals, and “Us/We versus Them” language within commentary when describing their home team which is consistent with previous work by Desmarais and Bruce (2008). The language used in such themes suggests commentators discuss their home team on an emotive level (see Roccas et al., 2008), which may be a tactic to connect to and capture their home country audience. Conversely, networks broadcasting content that contains their team describe their opposition using themes that are more descriptive and informative in nature with no significant use of emotive nationalistic appeals. The use of nationalistic themes such as “US/We” and “Them” in commentary for the network broadcasting matches featuring their team also creates a divide between teams. Billig (1995) notes that the media seek to personalise the coverage of an event through discourse that creates “insiders” and “outsiders.” Thus, it is commentary based on the Dutch team's work ethos and the use of “Us/We” and “Them” language that sets the Dutch team apart from its opponents. This serves to reinforce expectations and the team's standing within football, thus making more connections for Dutch television viewers of NOS broadcasts. Desmarais and Bruce (2008) indicate that emphasising differences in a team's description serves to articulate elements of internationally circulating discourse, while at the same time customising if for local audiences.