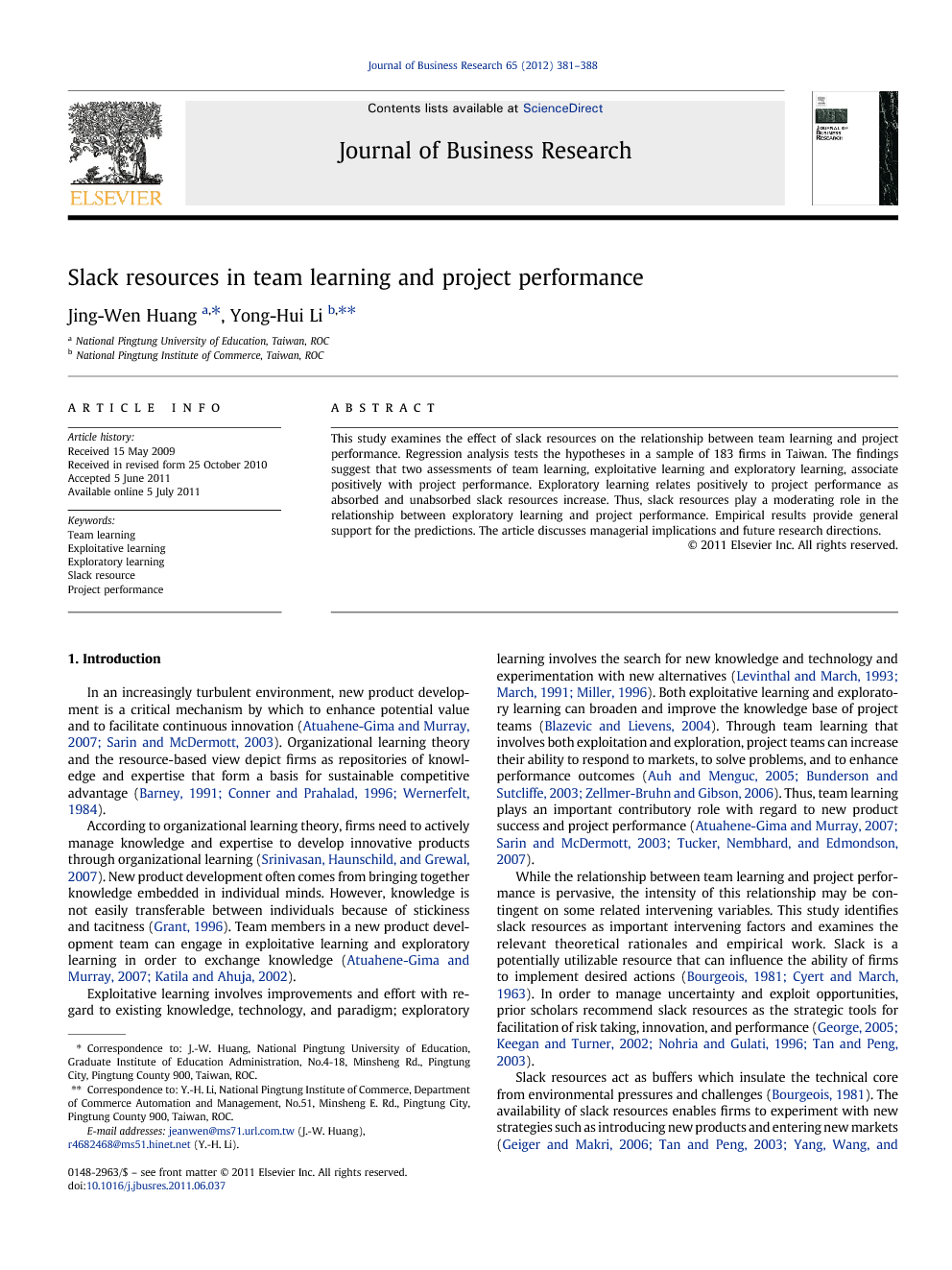 In an increasingly turbulent environment, new product development is a critical mechanism by which to enhance potential value and to facilitate continuous innovation (Atuahene-Gima and Murray, 2007 and Sarin and McDermott, 2003). Organizational learning theory and the resource-based view depict firms as repositories of knowledge and expertise that form a basis for sustainable competitive advantage (Barney, 1991, Conner and Prahalad, 1996 and Wernerfelt, 1984). According to organizational learning theory, firms need to actively manage knowledge and expertise to develop innovative products through organizational learning (Srinivasan, Haunschild, and Grewal, 2007). New product development often comes from bringing together knowledge embedded in individual minds. However, knowledge is not easily transferable between individuals because of stickiness and tacitness (Grant, 1996). Team members in a new product development team can engage in exploitative learning and exploratory learning in order to exchange knowledge (Atuahene-Gima and Murray, 2007 and Katila and Ahuja, 2002). Exploitative learning involves improvements and effort with regard to existing knowledge, technology, and paradigm; exploratory learning involves the search for new knowledge and technology and experimentation with new alternatives (Levinthal and March, 1993, March, 1991 and Miller, 1996). Both exploitative learning and exploratory learning can broaden and improve the knowledge base of project teams (Blazevic and Lievens, 2004). Through team learning that involves both exploitation and exploration, project teams can increase their ability to respond to markets, to solve problems, and to enhance performance outcomes (Auh and Menguc, 2005, Bunderson and Sutcliffe, 2003 and Zellmer-Bruhn and Gibson, 2006). Thus, team learning plays an important contributory role with regard to new product success and project performance (Atuahene-Gima and Murray, 2007, Sarin and McDermott, 2003 and Tucker et al., 2007). While the relationship between team learning and project performance is pervasive, the intensity of this relationship may be contingent on some related intervening variables. This study identifies slack resources as important intervening factors and examines the relevant theoretical rationales and empirical work. Slack is a potentially utilizable resource that can influence the ability of firms to implement desired actions (Bourgeois, 1981 and Cyert and March, 1963). In order to manage uncertainty and exploit opportunities, prior scholars recommend slack resources as the strategic tools for facilitation of risk taking, innovation, and performance (George, 2005, Keegan and Turner, 2002, Nohria and Gulati, 1996 and Tan and Peng, 2003). Slack resources act as buffers which insulate the technical core from environmental pressures and challenges (Bourgeois, 1981). The availability of slack resources enables firms to experiment with new strategies such as introducing new products and entering new markets (Geiger and Makri, 2006, Tan and Peng, 2003 and Yang et al., 2009). A firm can afford the risk taking and capital restriction associated with knowledge exploration and new product development (George, 2005, Nohria and Gulati, 1996 and Voss et al., 2008). Conversely, lack of available slack inhibits a firm's ability to mobilize necessary resources and constrain strategic change and aggressiveness (Ferrier, 2001). Thus, slack resources may play a contingent role with regard to triggering innovation and supporting the exploitation and exploration of knowledge leading to favorable project outcomes. This study aims to examine the effect of team learning on project performance and to determine whether slack resources play a moderating role in affecting the association of team learning and project performance.