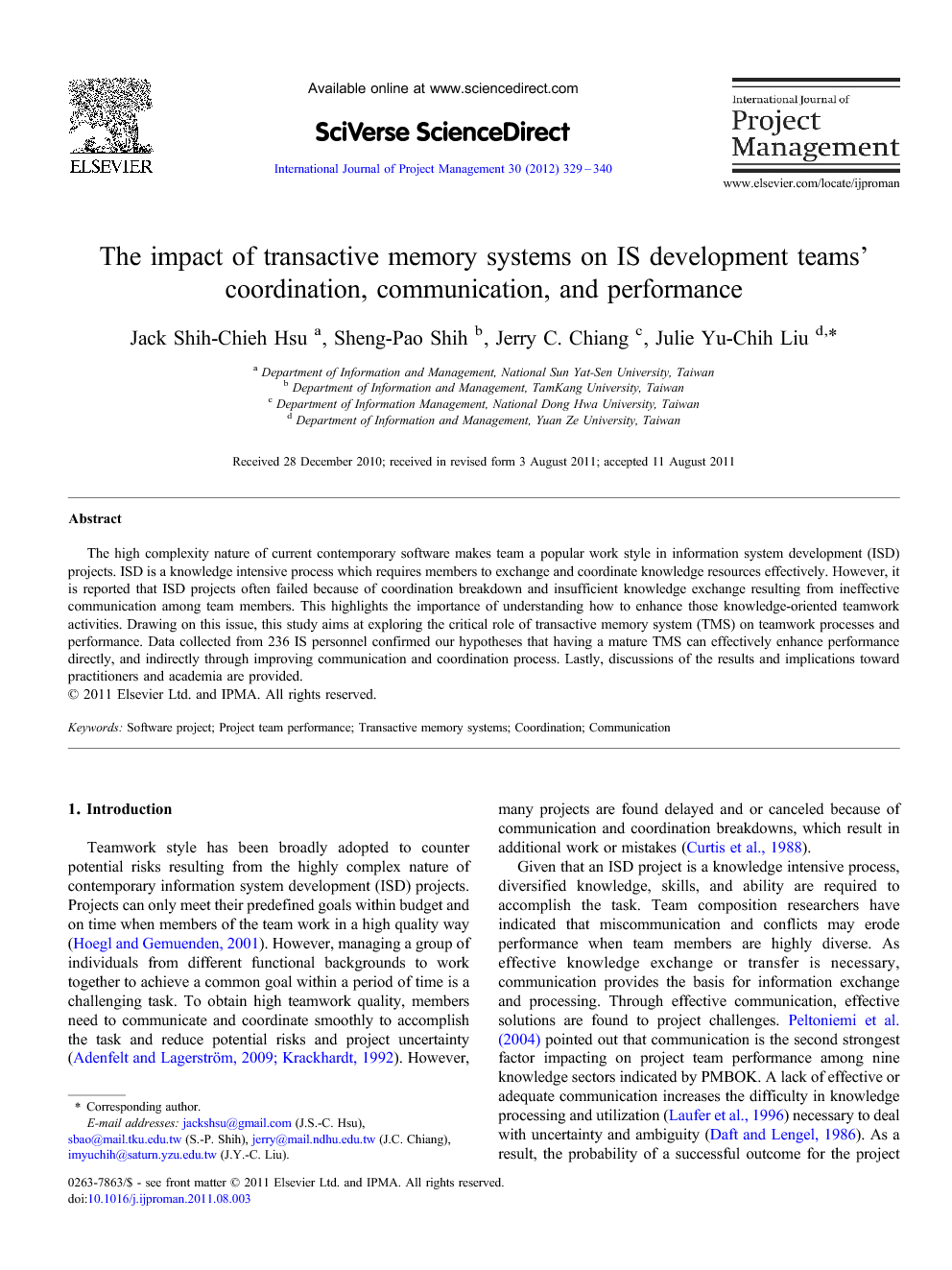 The high complexity nature of current contemporary software makes team a popular work style in information system development (ISD) projects. ISD is a knowledge intensive process which requires members to exchange and coordinate knowledge resources effectively. However, it is reported that ISD projects often failed because of coordination breakdown and insufficient knowledge exchange resulting from ineffective communication among team members. This highlights the importance of understanding how to enhance those knowledge-oriented teamwork activities. Drawing on this issue, this study aims at exploring the critical role of transactive memory system (TMS) on teamwork processes and performance. Data collected from 236 IS personnel confirmed our hypotheses that having a mature TMS can effectively enhance performance directly, and indirectly through improving communication and coordination process. Lastly, discussions of the results and implications toward practitioners and academia are provided.

Teamwork style has been broadly adopted to counter potential risks resulting from the highly complex nature of contemporary information system development (ISD) projects. Projects can only meet their predefined goals within budget and on time when members of the team work in a high quality way (Hoegl and Gemuenden, 2001). However, managing a group of individuals from different functional backgrounds to work together to achieve a common goal within a period of time is a challenging task. To obtain high teamwork quality, members need to communicate and coordinate smoothly to accomplish the task and reduce potential risks and project uncertainty (Adenfelt and Lagerström, 2009 and Krackhardt, 1992). However, many projects are found delayed and or canceled because of communication and coordination breakdowns, which result in additional work or mistakes (Curtis et al., 1988). Given that an ISD project is a knowledge intensive process, diversified knowledge, skills, and ability are required to accomplish the task. Team composition researchers have indicated that miscommunication and conflicts may erode performance when team members are highly diverse. As effective knowledge exchange or transfer is necessary, communication provides the basis for information exchange and processing. Through effective communication, effective solutions are found to project challenges. Peltoniemi et al. (2004) pointed out that communication is the second strongest factor impacting on project team performance among nine knowledge sectors indicated by PMBOK. A lack of effective or adequate communication increases the difficulty in knowledge processing and utilization (Laufer et al., 1996) necessary to deal with uncertainty and ambiguity (Daft and Lengel, 1986). As a result, the probability of a successful outcome for the project team is reduced, as is the chance of achieving predefined goals (Cohen and Bailey, 1997, Stasser and Taylor, 1991 and Weick and Roberts, 1993). At the same time, a project can also be viewed as a means of achieving predefined tasks through utilization of a collection of various resources, such as human labor, money, facilities, and expertise. Dependencies that are inherent in the structure of tasks or that result from assigning tasks to actors and resources can be found between tasks and the resources, or between the resources used (Crowston and Kammerer, 2010). The extent to which team members are able to coordinate with each other to manage the dependencies of resources, tasks, and actors plays a critical role in project execution (Faraj and Sproull, 2000 and Walz et al., 1993). The consequences of inadequate coordination include undertaking unnecessary work and blurring the boundaries of role responsibility, which, in turn, increase the total project cost or delays the schedule. Empirical studies also show that administrative and expertise coordination are both directly and indirectly associated with project team performance (e.g. Akgün and Lynn, 2002, Faraj and Sproull, 2000, Hoegl and Gemuenden, 2001, Nidumolu, 1995 and Nidumolu, 1996). Therefore, in the contemporary ISD project context, it is critical for project teams to have high work quality, achieved by having effective communication and coordination of diverse resources. In this study, we adopt the transactive memory system (TMS) concept and attempt to explore its impact on communication and coordination in ISD projects. TMS theory indicates that effective information exchange requires team members to know who possesses what knowledge, to trust the knowledge that one possesses, and to be able to access the knowledge (Lewis, 2004). It is unfortunate that given the importance of TMS on team processing effectiveness, its impact on communication, coordination, and the final project outcomes have been overlooked in the extant literature. Based on the understanding that knowing who possesses what knowledge can effectively promote information exchange and facilitate the matching of task, resources, and people, the focus of this study is to examine the relationships among TMS and teamwork processes, communication and coordination in particular, and project team performance in the content of IS development teams (Austin, 2003, Brandon and Hollingshead, 2004, Liang et al., 1995 and Wegner, 1987). Therefore, since project performance and teamwork process are team level variables, a team-level survey was conducted to achieve the goals specified above. More specifically, we argue that TMSs can enhance project team performance through improved communication and coordination as a result of the team's awareness of the collective knowledge that is available, and where it resides within the team (Lewis, 2004). With TMS, teams can obtain higher levels of performance by matching tasks, knowledge, and people (Brandon and Hollingshead, 2004). Communication can be made more effective by knowing the location of required knowledge and being able to access it. In the following sections, we first review related literature and build hypotheses on the basis of the review. Our methodological approach is outlined in the third section. The fourth section focuses on data analysis and discussion. Finally, conclusions and implications are provided.

As indicated in Table 5, the data collected from 236 ISD project managers or team members confirmed all proposed hypotheses that TMS affects project team performance both directly and indirectly through coordination and communication. The results indicate that TMS serves as one important means for enhancing both teamwork process and project team performance. This result highlights the following contributions of this study. First, for TMS research, in addition to its direct effect, we proposed and confirmed two mediators between TMS and outcome variable. Team members' skills, technological expertise, or application domain experiences will contribute more productively to an IS project if they have better communication and coordination. Second, we highlighted the importance of having mature TMS in ISD project. Project team performance can be benefited when members know the location of knowledge and are able to access it. However, our research has raised more questions than it has answered. For example, can the impact of TMS also be found in other teamwork process indicators? Is the magnitude of the relationship between TMS and teamwork processes the same in different contexts? Future researchers may wish to consider testing the moderating effects between TMS and teamwork process activities or to explore the type of teamwork process activities that may be improved by having a mature TMS. 7.1. Limitations and future research suggestions Although we have contributed to team research and TMS literature by providing additional solid evidence, this study is not without its limitations. First, common method variance might have inflated or deflated the magnitude of relationship between variables when both they were obtained from the same respondent. Although we designed our survey carefully and the results of the Harman's single factor test showed that CMV is not a potential issue in our study, future researchers are encouraged to collect data from different sources or different time slots to avoid CMV and to enhance research validity. Second, the perceived data from a project manager was used to represent the whole team. Although the manager of one team is qualified to depict most of the teamwork process, data collected from each individual team member is still preferable. Third, instead of using Lewis' (2003) instrument, a less frequently used but more parsimonious one was employed to understand the level of TMS within one team. Although we believe that a parsimonious measurement doesn't harm the validity of our study, future research may adopt one that is more widely used to assure the validity as well as generalizability of the proposed model. Finally, our measures require project managers to provide their perceptive evaluations after completion of a project when memories about the items may have dissipated or become clouded by other projects and processes. Indeed, the variables themselves may have caused some difficulty to the managers when evaluations were required as to the extent of changes in the system encountered and projected. Future research should take this into consideration.