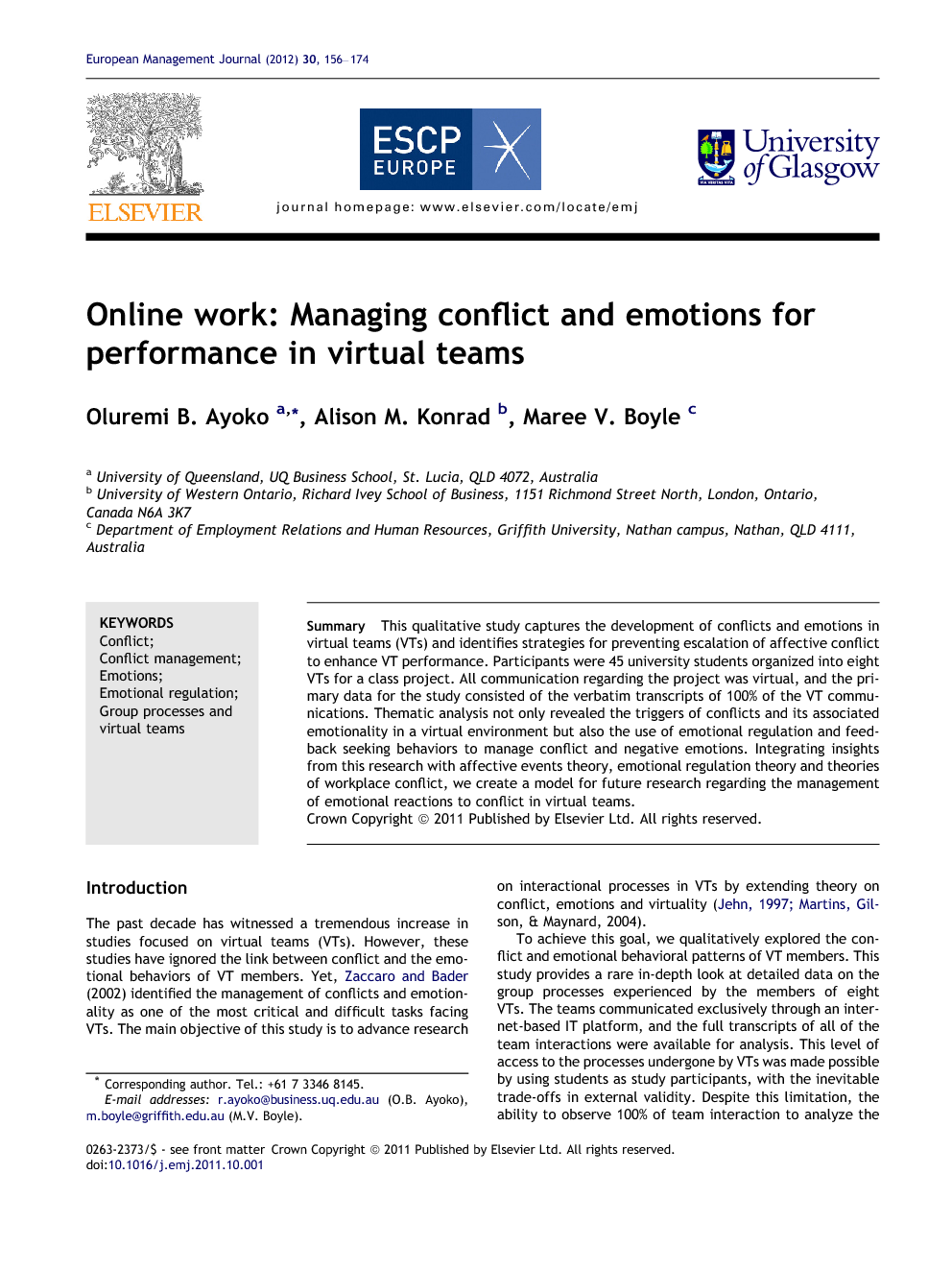 This qualitative study captures the development of conflicts and emotions in virtual teams (VTs) and identifies strategies for preventing escalation of affective conflict to enhance VT performance. Participants were 45 university students organized into eight VTs for a class project. All communication regarding the project was virtual, and the primary data for the study consisted of the verbatim transcripts of 100% of the VT communications. Thematic analysis not only revealed the triggers of conflicts and its associated emotionality in a virtual environment but also the use of emotional regulation and feedback seeking behaviors to manage conflict and negative emotions. Integrating insights from this research with affective events theory, emotional regulation theory and theories of workplace conflict, we create a model for future research regarding the management of emotional reactions to conflict in virtual teams.

The past decade has witnessed a tremendous increase in studies focused on virtual teams (VTs). However, these studies have ignored the link between conflict and the emotional behaviors of VT members. Yet, Zaccaro and Bader (2002) identified the management of conflicts and emotionality as one of the most critical and difficult tasks facing VTs. The main objective of this study is to advance research on interactional processes in VTs by extending theory on conflict, emotions and virtuality (Jehn, 1997 and Martins et al., 2004). To achieve this goal, we qualitatively explored the conflict and emotional behavioral patterns of VT members. This study provides a rare in-depth look at detailed data on the group processes experienced by the members of eight VTs. The teams communicated exclusively through an internet-based IT platform, and the full transcripts of all of the team interactions were available for analysis. This level of access to the processes undergone by VTs was made possible by using students as study participants, with the inevitable trade-offs in external validity. Despite this limitation, the ability to observe 100% of team interaction to analyze the development of conflicts, emotions, and the deployment of strategies for managing emotions and conflicts is rarely, if ever, possible in workplace settings. Due to the richness of the dataset available to us, we are able to trace sources of and changes in conflict and emotionality over time, which is a critical factor because processes are known to change across the team life cycle (Gersick, 1988 and Gersick, 1989). VT research has identified conflict as a critical process that must be managed for effective goal achievement (Aubert and Kesley, 2003, Baba et al., 2004 and Montoya-Weiss et al., 2001). Prior studies have not combined a focus on conflict with the articulation and management of emotion, a gap that Nair (2008) identified across multiple research domains. By tracing the eruption of conflicts and emotions together across time, we are able to identify strategies for effective management of these critical issues in VTs at a fine-grained level that prior studies using survey measures of generalized conflict management types could not achieve. We use the insights gained from this analysis to integrate affective events theory (Weiss & Cropanzano, 1996) and emotional regulation theory (Gross & John, 2003), with theories of workplace conflict (De Dreu and Weingart, 2003 and Jehn and Mannix, 2001) to create a new model for managing emotional reactions to conflict in VTs.

The major aim of this current research is to explore the patterns of conflict and emotions in VTs, identify the conflict management behaviors as well as explore the connection between time and the emergence of conflict and emotions in VTs. Our results demonstrate that VTs, like FTFTs, experience cognitive, affective and role ambiguity conflict. In particular, VT members respond to conflicts by communicating negative emotions online. The communication of negative emotions escalates cognitive conflicts into affective conflicts, which if prolonged, are associated with poor performance. Nevertheless, expressing emotions also assist members to focus on and attempt to resolve the events limiting performance. In addition, emotions of frustration and anger predominated during the early stages if the VT development. This phase gave way to positive emotions of humor, joy and happiness during the final performing phase of the project. Additionally, VTs managed their conflict using mediation, apology, explanations, positive reinforcement, and feedback seeking behaviors. Based on our results, we have developed a model of VT dynamics with key propositions. Specifically, our model for managing emotional reactions to conflict in VTs identifies several points at which VT members can intervene to prevent the escalation of affective conflict in order to protect work processes and maximize VT performance. Future research is needed to test the relationships proposed by the model.