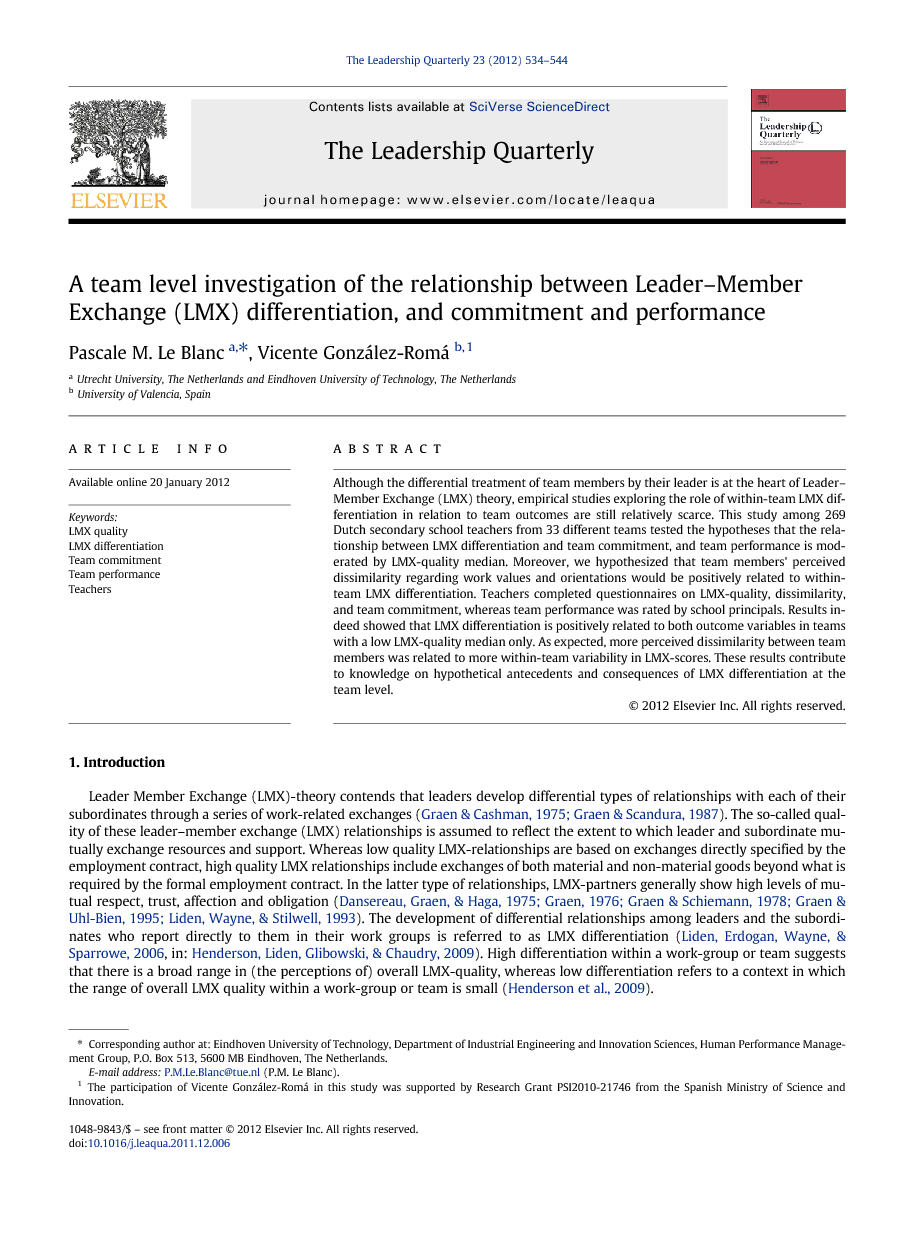 Leader Member Exchange (LMX)-theory contends that leaders develop differential types of relationships with each of their subordinates through a series of work-related exchanges (Graen and Cashman, 1975 and Graen and Scandura, 1987). The so-called quality of these leader–member exchange (LMX) relationships is assumed to reflect the extent to which leader and subordinate mutually exchange resources and support. Whereas low quality LMX-relationships are based on exchanges directly specified by the employment contract, high quality LMX relationships include exchanges of both material and non-material goods beyond what is required by the formal employment contract. In the latter type of relationships, LMX-partners generally show high levels of mutual respect, trust, affection and obligation (Dansereau et al., 1975, Graen, 1976, Graen and Schiemann, 1978, Graen and Uhl-Bien, 1995 and Liden et al., 1993). The development of differential relationships among leaders and the subordinates who report directly to them in their work groups is referred to as LMX differentiation (Liden, Erdogan, Wayne, & Sparrowe, 2006, in: Henderson, Liden, Glibowski, & Chaudry, 2009). High differentiation within a work-group or team suggests that there is a broad range in (the perceptions of) overall LMX-quality, whereas low differentiation refers to a context in which the range of overall LMX quality within a work-group or team is small (Henderson et al., 2009). Given its explicit focus on the quality of the exchange relationship that develops between a leader and each follower, the vast majority of empirical research on the LMX-theory has concentrated on testing relationships between LMX-quality and work-related outcomes at the dyadic (i.e., leader–member) level. Over the past decades, many studies have supported the positive effects of high LMX-quality on individual employee outcomes such as job satisfaction, job involvement, in-role performance, organizational commitment, organizational citizenship behavior and decreased propensity to quit (see e.g., Duarte et al., 1993, Epitropaki and Martin, 1999, Gerstner and Day, 1997, Graen and Uhl-Bien, 1995, Ilies et al., 2007, LePine et al., 2002 and Vecchio, 1982). However, the prevailing individual level focus in research on LMX is surprising, given that the LMX model was originally advanced to account for how leaders' differential treatment of multiple subordinates in a work group influences activity within the group (Henderson et al., 2009). Though individual-level perceptions of LMX-quality are reflective of interpersonal social exchange behaviors and motives in the leader–member dyad, they do not capture how within-group patterns in LMX-quality may create a social context that influences employee attitudes and behaviors (Henderson et al., 2009 and Mayer and Piccolo, 2006). As Day and Schyns (2010) note, the different relationships a leader has with each follower can influence other relationships in the collective, and thus affect the results of leadership at the work group level. LMX differentiation can be considered the core element of the LMX-model (Henderson et al., 2009). However, empirical research on the role of LMX differentiation at the (work) group or team level is still scarce and its results are inconsistent. Recently, two studies tested the interaction effect between LMX differentiation and mean or median LMX-quality at the team level (Boies and Howell, 2006 and Liden et al., 2006). Whereas Liden et al. (2006) found a significant interaction effect on team performance that showed the expected sign, Boies and Howell (2006) found a significant interaction effect on team potency and team conflict that showed a sign contrary to what was expected. So, the role of LMX differentiation at the team level is still far from clear, and more research on this construct is needed in order to advance LMX-theory. This research will contribute to moving this theory into its fourth stage of development as identified by Graen and Uhl-Bien (1995), in which leader–member relationships are studied within their respective work unit. Therefore, the main goal of the present study is to examine the relationship between LMX differentiation and two relevant team outcomes (team performance and affective team commitment). As we will show later, we hypothesize that this relationship is moderated by LMX-quality median. Taking into account the central role that LMX differentiation has within LMX-theory, it is also theoretically important to identify its antecedents, so that its nomological network becomes clearer. Thus, we will also examine whether perceived dissimilarity among team members is related to LMX differentiation. Besides being important from a theoretical perspective, as outlined above, an increased understanding of the role of LMX-differentiation is also relevant from a practical point of view. Nowadays many organizations are organizing work around teams as the basic unit of their structure. Thus, the examination of leadership effects at the group level might be particularly relevant for organizations where leaders lead teams rather than single individuals, and where the work is organized around whole units (Boies & Howell, 2006). Gaining more detailed insight into the circumstances under which LMX differentiation is either functional or dysfunctional, may be useful to design strategies for managing teams based on LMX propositions. For instance, if LMX differentiation is found to be functional when the general (median) level of LMX-quality within a team is low, team managers should learn to build differentiated leader–member relationships with specific team members.