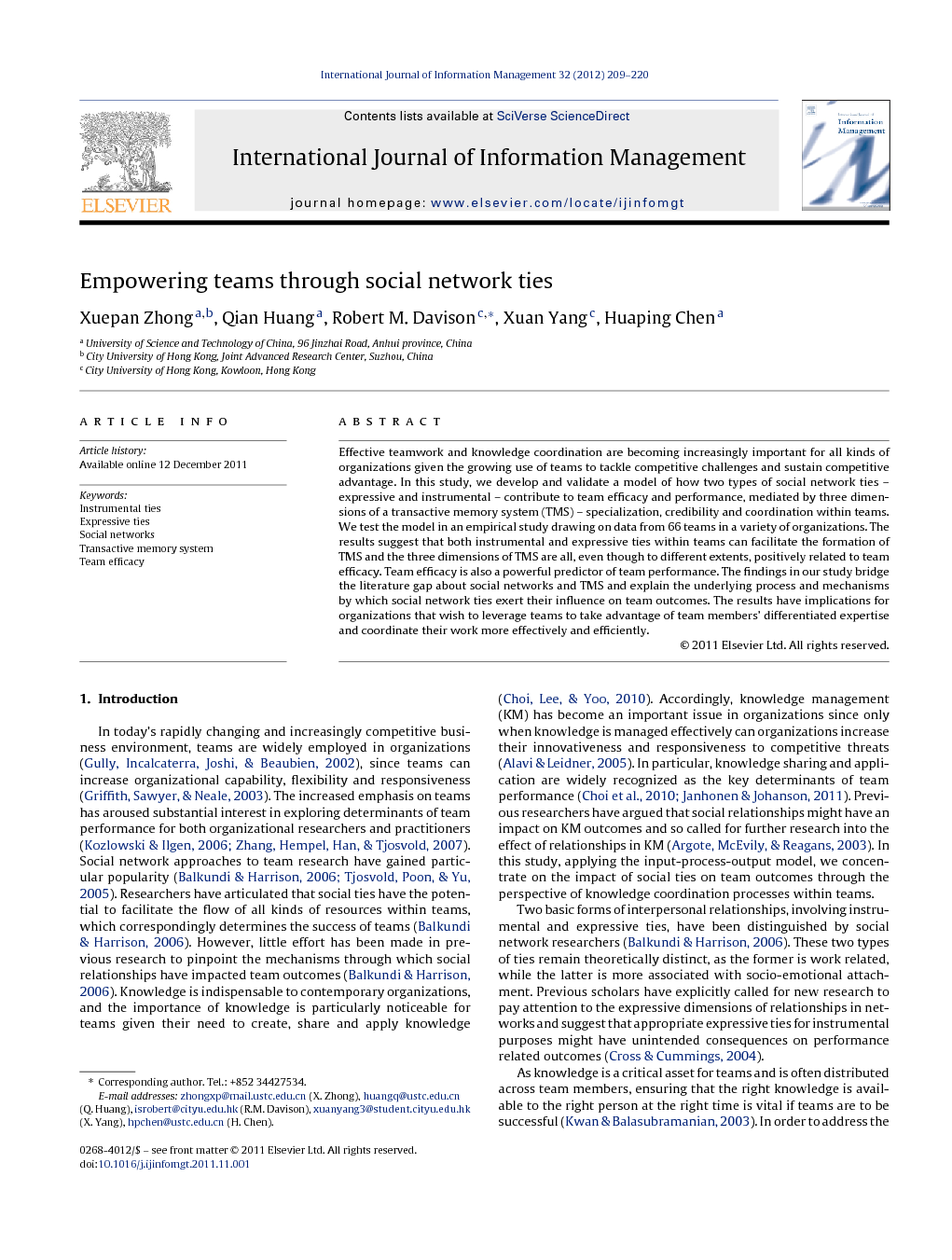 Effective teamwork and knowledge coordination are becoming increasingly important for all kinds of organizations given the growing use of teams to tackle competitive challenges and sustain competitive advantage. In this study, we develop and validate a model of how two types of social network ties – expressive and instrumental – contribute to team efficacy and performance, mediated by three dimensions of a transactive memory system (TMS) – specialization, credibility and coordination within teams. We test the model in an empirical study drawing on data from 66 teams in a variety of organizations. The results suggest that both instrumental and expressive ties within teams can facilitate the formation of TMS and the three dimensions of TMS are all, even though to different extents, positively related to team efficacy. Team efficacy is also a powerful predictor of team performance. The findings in our study bridge the literature gap about social networks and TMS and explain the underlying process and mechanisms by which social network ties exert their influence on team outcomes. The results have implications for organizations that wish to leverage teams to take advantage of team members’ differentiated expertise and coordinate their work more effectively and efficiently.

5.1. The effects of social ties on specialization The effects of two kinds of social network ties on three aspects of TMS were investigated. Instrumental ties and expressive ties are both significantly related to all three aspects of TMS. This suggests that both types of ties may facilitate the development of a knowledge map of who knows what. Further, both types of ties can promote specialized expertise formation within in teams. The significantly positive impact of expressive ties on specialization is contrary to the suggestions of Kanawattanachai and Yoo (2007) that expressive ties among team members may cause members to focus primarily on the surface-level diversity, potentially hindering their ability to take advantage of each other's deep work related expertise and knowledge. Expressive ties have a stronger effect on specialization than do instrumental ties because expressive ties are more focused on the transfer of tacit knowledge (Zhou et al., 2010). However, we found that instrumental ties exert more influence on specialization than expressive ties. This can be understood easily, since instrumental ties are work-related and can release more expertise information. 5.2. The effects of social ties on coordination We also found that both types of social ties can lubricate and promote coordination process. However, instrumental ties are more important than expressive ties. One reason for this may relate to the fact that expressive ties may lead to similar perspectives towards work (Gibbons, 2004) and so knowledge redundancy (Reagans & Zuckerman, 2001). Thus, for team coordination which requires diverse knowledge from different team members, instrumental ties can provide more diverse task based knowledge, which is more important than the benefits of mutual social support derived from expressive ties. 5.3. The effects of social ties on credibility The significant impacts of instrumental and expressive ties on credibility are also confirmed, which is congruent with previous research (Zhou et al., 2010). The results also indicate that expressive ties are more important for the formation of credibility. We argue that though credibility is formed based on the competence of other members, it is still an affect-laden construct. Besides, as we mentioned before, expressive ties often link individuals who may perceive social similarity with each other (Gibbons, 2004), since based on self-categorization theory, individuals are more likely to aggregate themselves with others in the light of objective attributes (Turner, Hogg, Oakes, Reicher, & Wetherell, 1987). Cultural-ethnic similarity is recognized as an important antecedent of cognition-based trust as persons will be more ready to trust a person in the same cultural group rather than a person in a different cultural group (McAllister, 1995). 5.4. The effects of TMS on team efficacy The significant impacts of the three dimensions of TMS on team efficacy are confirmed. Among the three dimensions, coordination plays the most important role for team efficacy; the significance of credibility is slightly lower than coordination and specialization contributes the least influence. The results support the notion that coordination is the pivotal dimension of TMS (Kanawattanachai & Yoo, 2007) and imply that not only can the formation of TMS give inspiration to team construction and teamwork processes, but it can also promote a team's motivational state. It is clear that team efficacy has a significant relationship with team performance. 5.5. The mediation effect of team efficacy between TMS and team performance Interestingly, we found that team efficacy fully mediated the relationship between coordination and team performance, but only partially mediated the impacts of specialization and credibility on team performance. Part of the reason for the mediating role of team efficacy may be that even if TMS is well developed in teams, if the team members do not have high certainty that they can achieve the collective goal, they may not want to exert much effort to take advantage of others’ expertise. The amount of effort is an important precursor to team performance (Bandura, 1997). 5.6. The effects of task interdependence on team performance In this study, we also found that the control variable – task interdependence – has a significant effect on team performance. A possible explanation of this effect may be that task interdependence is the glue that holds different team members together; when team members are highly interdependent with each other, team members will be more motivated to put their efforts together to perform well (Janz, Colquitt, & Noe, 1997). Correspondingly, the team performance will be high. Moreover, at a lower level of task interdependence, team members may focus more on individual accomplishment rather than on team accomplishment (Aubé & Rousseau, 2005). Thus, when task interdependence is high, all team members may strive to the same direction in order to better accomplish the team collective goal.