عنوان انگلیسی
All for one, one for all: Coopetition and virtual team performance
دانلود فوری مقاله + سفارش ترجمه 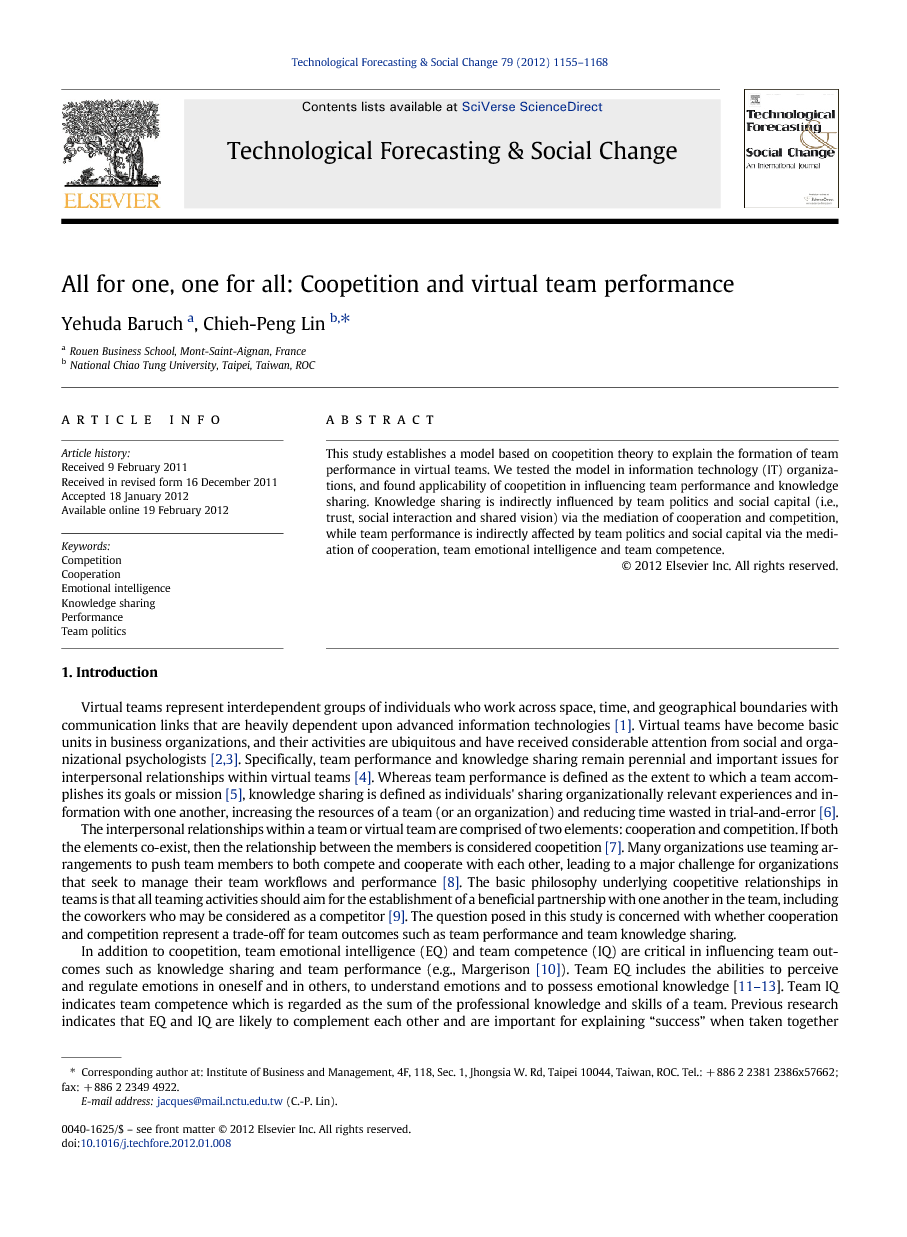 This study establishes a model based on coopetition theory to explain the formation of team performance in virtual teams. We tested the model in information technology (IT) organizations, and found applicability of coopetition in influencing team performance and knowledge sharing. Knowledge sharing is indirectly influenced by team politics and social capital (i.e., trust, social interaction and shared vision) via the mediation of cooperation and competition, while team performance is indirectly affected by team politics and social capital via the mediation of cooperation, team emotional intelligence and team competence.

Virtual teams represent interdependent groups of individuals who work across space, time, and geographical boundaries with communication links that are heavily dependent upon advanced information technologies [1]. Virtual teams have become basic units in business organizations, and their activities are ubiquitous and have received considerable attention from social and organizational psychologists [2] and [3]. Specifically, team performance and knowledge sharing remain perennial and important issues for interpersonal relationships within virtual teams [4]. Whereas team performance is defined as the extent to which a team accomplishes its goals or mission [5], knowledge sharing is defined as individuals' sharing organizationally relevant experiences and information with one another, increasing the resources of a team (or an organization) and reducing time wasted in trial-and-error [6]. The interpersonal relationships within a team or virtual team are comprised of two elements: cooperation and competition. If both the elements co-exist, then the relationship between the members is considered coopetition [7]. Many organizations use teaming arrangements to push team members to both compete and cooperate with each other, leading to a major challenge for organizations that seek to manage their team workflows and performance [8]. The basic philosophy underlying coopetitive relationships in teams is that all teaming activities should aim for the establishment of a beneficial partnership with one another in the team, including the coworkers who may be considered as a competitor [9]. The question posed in this study is concerned with whether cooperation and competition represent a trade-off for team outcomes such as team performance and team knowledge sharing. In addition to coopetition, team emotional intelligence (EQ) and team competence (IQ) are critical in influencing team outcomes such as knowledge sharing and team performance (e.g., Margerison [10]). Team EQ includes the abilities to perceive and regulate emotions in oneself and in others, to understand emotions and to possess emotional knowledge [[11], [12] and [13]]. Team IQ indicates team competence which is regarded as the sum of the professional knowledge and skills of a team. Previous research indicates that EQ and IQ are likely to complement each other and are important for explaining “success” when taken together [12]. This suggests that team emotional intelligence and team competence are positively related to teaming consequences such as knowledge sharing and team performance. This study differs from previous research in certain important ways. First, a majority of previous research related to interactions among team members focuses on either competition or cooperation, which often resulted in a one-sided understanding of team members and their team outcomes. The coopetitive relationship between team members is worth studying to avoid managerial misunderstanding because simultaneous cooperation and competition among the members substantially complicate teaming and its outcomes. This study examining the team outcomes based on coopetition generates further in-depth understanding regarding critical determinants in the context of coopetition. Second, many previous studies of cooperation or competition (i.e., coopetition) emphasize face-to-face interaction styles among team members without taking the contexts of communication technology into consideration (e.g., Kent et al. [14]; Thomas and Bostrom [15]; Townsend et al. [16] and [17]). Virtual teams work collaboratively in geographically dispersed locations but still share the same interests, goals, needs and practices that define face-to-face teams (e.g., Chiu, Hsu, and Wang [18]). Due to advances in information technology facilitating communication and information sharing, more companies are moving towards using virtual teams. Regrettably, few theoretical attempts to integrate the coopetition literature in the settings of virtual teams have emerged. For that reason, examining the applicability of coopetition among virtual team members is a necessary and essential complement to previous studies given the abundant research on face-to-face teams. Third, while some prior empirical studies have examined coopetition at the firm level (e.g., Tiessen and Linton [19]), this study is one of the few to use primary survey data collected from team members to test the determinants and outcomes of coopetition based on teams. Research supports and extends the notion that coopetition is not only important among intra-organizational partners, but also among inter-team parties (or inter-organizational parties) and these interactions are key for a team's or firm's long-term viability [20]. Last, this study pioneers the expansion of coopetition by including team EQ/IQ as critical variables influencing team outcomes. Most previous research related to coopetition considers cooperation and competition to the neglect of other factors (e.g., Bouncken and Fredrich [22]; Lin et al. [21]; Luo et al. [20]). This study aims at filling a gap in the literature of coopetition by demonstrating how team EQ/IQ and coopetition jointly influence team outcomes. While previous literature has so far privileged a focus on inter-firm relationships [23], little attention has been paid to intra-team relationships, which is examined by this study.

Coopetition has been addressed in the traditional teamwork literature as a trade-off in creating progress towards organizational outcomes, particularly team performance [109] and [110]. To date, teams acquire dominating roles that provide a potent response to fast changing markets through advanced information technology, where teamwork would have once been impossible [1] and [54]. We advanced current knowledge by including the influential effects of coopetition and team EQ/IQ into a model to examine their mediating roles for generating team outcomes. Even though previous research has suggested a potential relationship between coopetition, team EQ/IQ and team outcomes individually, few studies have empirically explored the reasons for those relationships (e.g., Luo et al. [20]) by simultaneously taking all the factors into consideration. In terms of the mediating role of cooperation, all of our four antecedents were found to have significant influence on team outcomes via cooperation, empirically supporting the intrinsic need for collaboration across teams. Social capital is powerful in improving team outcomes via cooperation. Yet, it is surprising that only one of the three social capital factors (i.e., trust) increased knowledge sharing via the mediation of competition, which has no effect on team performance. This finding first suggests that trust within team may be more critical than other social capital factors in virtual settings because such trust simultaneously drove cooperation and competition, making it key in the success of coopetition. Particularly, virtual meeting conducted through 3D avatar-based communication may facilitate “seeing is believing,” thus effectively strengthening the relationship between trust and cooperation and curbing the relationship between trust and competition. Team politics' significant influence on team outcomes indirectly via the mediation of coopetition suggests management should be careful about politics because team politics obviously yield significant influence through different channels to damage knowledge sharing and team performance. The issue of politics within teams (i.e., team politics) has not received much research attention and we need to learn more about its overall negative effects on competition and cooperation, which ultimately impact knowledge sharing and team performance. If management engages in negative politics as a major tool to make a good deal, the organization will eventually pay a heavy price for this type of manipulation. Another surprising finding is that team emotional intelligence and team competence only affects team performance rather than knowledge sharing. It may be understandable that team emotional intelligence and team competence both reflect types of team capability that improves performance, but their lack of significant influence on knowledge sharing deserves future research. Nevertheless, it is important to note that team emotional intelligence and team competence are both affected by three social capital factors, making social capital factors unique and powerful ones in boosting team performance. For example, previous literature suggests that virtual worlds allow team members to communicate and foster trust, interaction and shared vision in an interactive, multi-channeled communication environment with a virtual face and identity [111]. Moreover, the social capital factors enhance team performance through three different mediators — cooperation, team emotional intelligence and team competence, suggesting that “all for one, one for all” in social contexts may be a good policy for fostering team performance over the long term. Our findings indicate that competition is negatively related to knowledge sharing. Yet, such findings do not directly imply that managers should aim to fully eliminate competition in their teams due to two reasons. First, a reasonable level of competition is healthy for organizations to stimulate team spirits [112]. Second, the cooperation becomes more important and valued by employees when competition increases to a certain extent. Thus, managers should aim to reach a balance between cooperation and competition in their team, leading to optimal conditions in terms of various team outcomes, as we demonstrated in our study. In summary, while existing research and theory on relationships among team members focus on either competitive or cooperative relationships, little research has considered that team members can be involved in both competition and cooperation at the same time, hence both kinds of relationships need to be emphasized simultaneously [9] as we investigated herein. By complementing the previous literature, this study provides important references point for management to benefit from the advantage of virtual teaming as well as to reduce the negative impact of such teaming (e.g., competition). Based on this study regarding the intra-team relationship in the same organization, future research may expand the research scope to the area of inter-team relationship across different organizations to investigate unexplored inter-teaming dynamics.