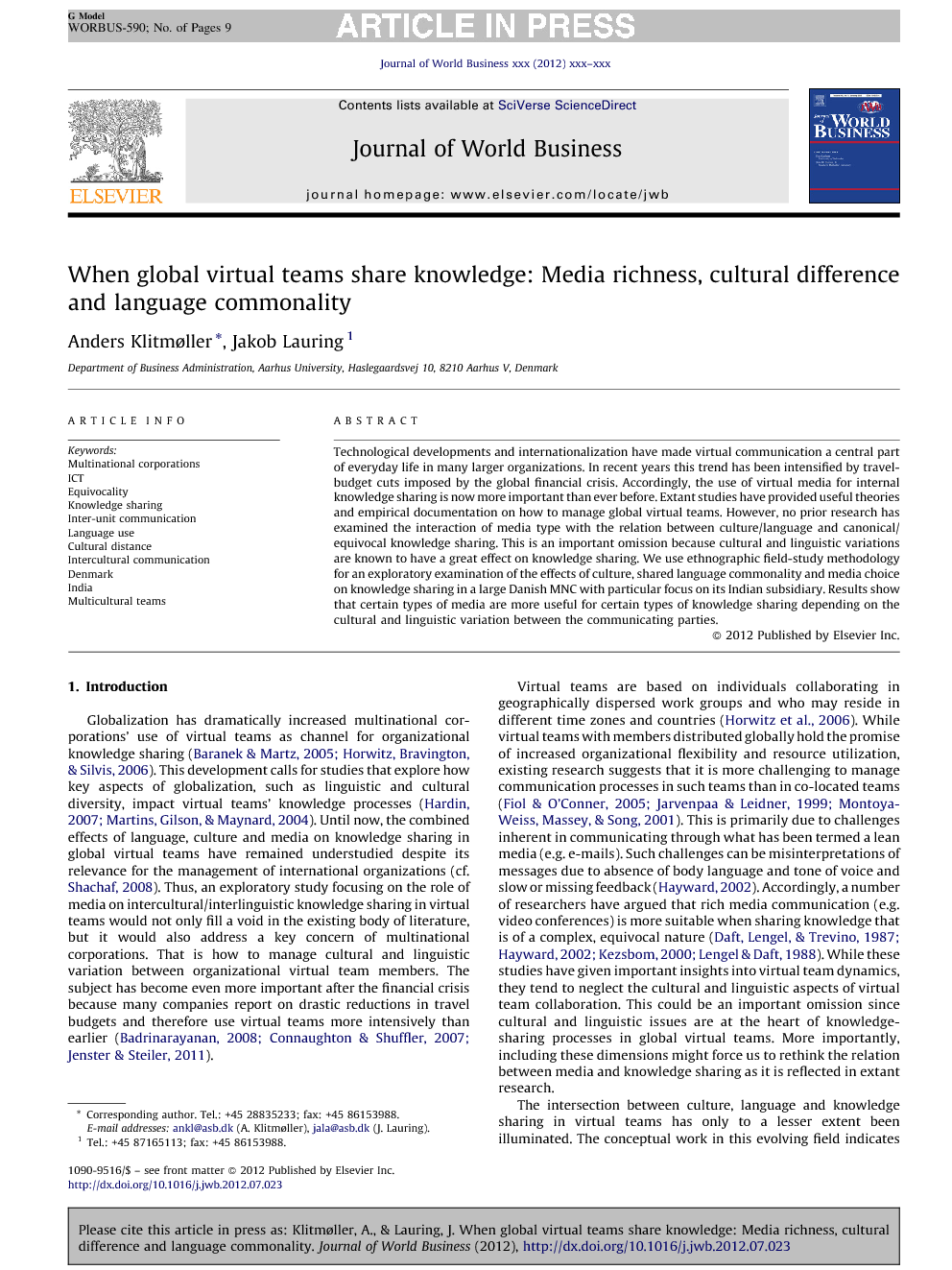 Technological developments and internationalization have made virtual communication a central part of everyday life in many larger organizations. In recent years this trend has been intensified by travel-budget cuts imposed by the global financial crisis. Accordingly, the use of virtual media for internal knowledge sharing is now more important than ever before. Extant studies have provided useful theories and empirical documentation on how to manage global virtual teams. However, no prior research has examined the interaction of media type with the relation between culture/language and canonical/equivocal knowledge sharing. This is an important omission because cultural and linguistic variations are known to have a great effect on knowledge sharing. We use ethnographic field-study methodology for an exploratory examination of the effects of culture, shared language commonality and media choice on knowledge sharing in a large Danish MNC with particular focus on its Indian subsidiary. Results show that certain types of media are more useful for certain types of knowledge sharing depending on the cultural and linguistic variation between the communicating parties.

Globalization has dramatically increased multinational corporations’ use of virtual teams as channel for organizational knowledge sharing (Baranek and Martz, 2005 and Horwitz et al., 2006). This development calls for studies that explore how key aspects of globalization, such as linguistic and cultural diversity, impact virtual teams’ knowledge processes (Hardin, 2007 and Martins et al., 2004). Until now, the combined effects of language, culture and media on knowledge sharing in global virtual teams have remained understudied despite its relevance for the management of international organizations (cf. Shachaf, 2008). Thus, an exploratory study focusing on the role of media on intercultural/interlinguistic knowledge sharing in virtual teams would not only fill a void in the existing body of literature, but it would also address a key concern of multinational corporations. That is how to manage cultural and linguistic variation between organizational virtual team members. The subject has become even more important after the financial crisis because many companies report on drastic reductions in travel budgets and therefore use virtual teams more intensively than earlier (Badrinarayanan, 2008, Connaughton and Shuffler, 2007 and Jenster and Steiler, 2011). Virtual teams are based on individuals collaborating in geographically dispersed work groups and who may reside in different time zones and countries (Horwitz et al., 2006). While virtual teams with members distributed globally hold the promise of increased organizational flexibility and resource utilization, existing research suggests that it is more challenging to manage communication processes in such teams than in co-located teams (Fiol and O’Conner, 2005, Jarvenpaa and Leidner, 1999 and Montoya-Weiss et al., 2001). This is primarily due to challenges inherent in communicating through what has been termed a lean media (e.g. e-mails). Such challenges can be misinterpretations of messages due to absence of body language and tone of voice and slow or missing feedback (Hayward, 2002). Accordingly, a number of researchers have argued that rich media communication (e.g. video conferences) is more suitable when sharing knowledge that is of a complex, equivocal nature (Daft et al., 1987, Hayward, 2002, Kezsbom, 2000 and Lengel and Daft, 1988). While these studies have given important insights into virtual team dynamics, they tend to neglect the cultural and linguistic aspects of virtual team collaboration. This could be an important omission since cultural and linguistic issues are at the heart of knowledge-sharing processes in global virtual teams. More importantly, including these dimensions might force us to rethink the relation between media and knowledge sharing as it is reflected in extant research. The intersection between culture, language and knowledge sharing in virtual teams has only to a lesser extent been illuminated. The conceptual work in this evolving field indicates that the relation between media richness and knowledge-sharing effectiveness might not be straight forward (Jarvenpaa and Leidner, 1999 and Stahl et al., 2010). It is proposed that rich media is not always superior to lean media in an intercultural context. Rich media could lead to stereotyping and social boundary creation with a negative impact on knowledge sharing. Lean media, on the other hand, may reduce surface-level cultural cues and thereby down play cultural/linguistic differences in the team (Spears, Lea, & Postmes, 2001). This could suggest that lean media usage in global virtual teams might be more effective than in co-located teams for routine tasks or what has been termed canonical knowledge sharing. The same holds true for the impact of differences in language use on virtual knowledge sharing. Studies on co-located multicultural teams have shown that the degree of shared common language and variation in proficiency level has an important impact on team cohesiveness, team effectiveness and knowledge sharing (Lauring and Selmer, 2010, Lauring and Selmer, 2011 and Lauring and Selmer, 2012). However, several researchers have argued that more empirical studies are needed to understand virtual communication in an intercultural context (Connaughton and Shuffler, 2007 and Gibson and Gibbs, 2006). The aim of this study therefore is to empirically explore how variation in culture and language affects knowledge-sharing effectiveness in global virtual teams using lean and rich media. Included in the paper are a literature review, a method and an analysis section revealing results on the interaction between Indian and Danish team members in a Danish multinational corporation (MNC). Finally, the results are discussed in terms of their theoretical implications for further research and practical relevance for the management of virtual teams.

To the best of our knowledge, this study is the first attempt to empirically explore and capture how the chosen media interact with the relation between culture/language and equivocal/canonical knowledge sharing in MNCs. As ICT communication and knowledge sharing becomes increasingly important for MNCs worldwide, the study contributes significantly to our understanding of the challenges inherent in this process. In the literature it has been suggested that virtuality might reduce negative effects of intercultural communication. This study, however, suggests that cultural factors, such as a cultural difference, are best addressed using the richest medium possible while difference in common language usage should be confronted by using a leaner media. This novel finding suggests that differences in shared language commonality have a more prolific impact on knowledge sharing than one might at first assume. Hence, language use should be taken into consideration when choosing media to facilitate intercultural knowledge-sharing processes between geographically dispersed MNC units.