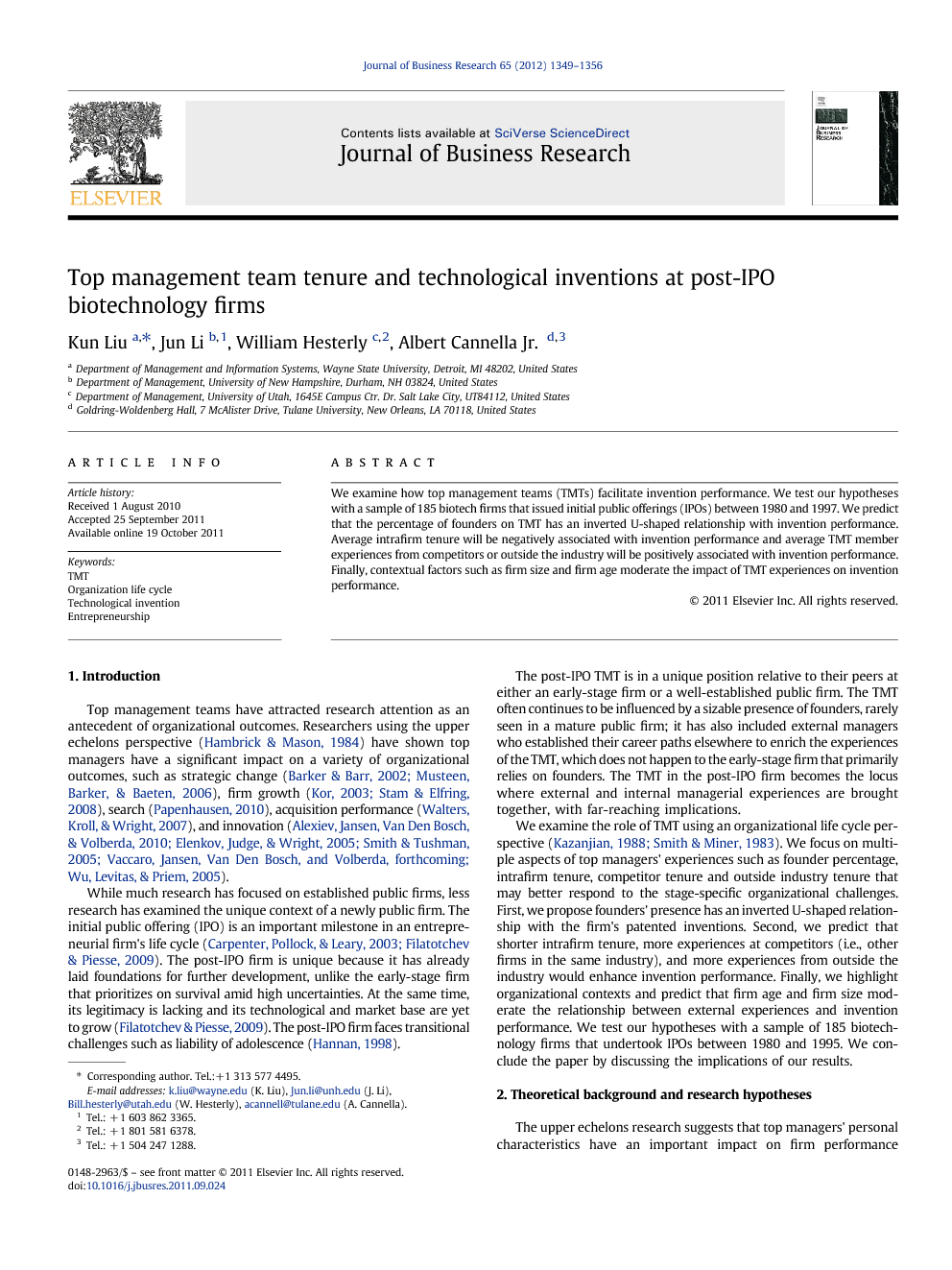 Top management teams have attracted research attention as an antecedent of organizational outcomes. Researchers using the upper echelons perspective (Hambrick & Mason, 1984) have shown top managers have a significant impact on a variety of organizational outcomes, such as strategic change (Barker and Barr, 2002 and Musteen et al., 2006), firm growth (Kor, 2003 and Stam and Elfring, 2008), search (Papenhausen, 2010), acquisition performance (Walters, Kroll, & Wright, 2007), and innovation (Alexiev et al., 2010, Elenkov et al., 2005, Smith and Tushman, 2005, Vaccaro et al., forthcoming and Wu et al., 2005). While much research has focused on established public firms, less research has examined the unique context of a newly public firm. The initial public offering (IPO) is an important milestone in an entrepreneurial firm's life cycle (Carpenter et al., 2003 and Filatotchev and Piesse, 2009). The post-IPO firm is unique because it has already laid foundations for further development, unlike the early-stage firm that prioritizes on survival amid high uncertainties. At the same time, its legitimacy is lacking and its technological and market base are yet to grow (Filatotchev & Piesse, 2009). The post-IPO firm faces transitional challenges such as liability of adolescence (Hannan, 1998). The post-IPO TMT is in a unique position relative to their peers at either an early-stage firm or a well-established public firm. The TMT often continues to be influenced by a sizable presence of founders, rarely seen in a mature public firm; it has also included external managers who established their career paths elsewhere to enrich the experiences of the TMT, which does not happen to the early-stage firm that primarily relies on founders. The TMT in the post-IPO firm becomes the locus where external and internal managerial experiences are brought together, with far-reaching implications. We examine the role of TMT using an organizational life cycle perspective (Kazanjian, 1988 and Smith and Miner, 1983). We focus on multiple aspects of top managers' experiences such as founder percentage, intrafirm tenure, competitor tenure and outside industry tenure that may better respond to the stage-specific organizational challenges. First, we propose founders' presence has an inverted U-shaped relationship with the firm's patented inventions. Second, we predict that shorter intrafirm tenure, more experiences at competitors (i.e., other firms in the same industry), and more experiences from outside the industry would enhance invention performance. Finally, we highlight organizational contexts and predict that firm age and firm size moderate the relationship between external experiences and invention performance. We test our hypotheses with a sample of 185 biotechnology firms that undertook IPOs between 1980 and 1995. We conclude the paper by discussing the implications of our results.